I was already on the dang fence. SMH

So a paywalled “crafting troop” that’ll be dumped into the pool of Vault rewards. It can already take a silly number of keys to get a missing Gnome, and I would bet on this being either the same rarity as a Gnome or rarer (since it’s apparently used for something ‘cool’ down the road, vs a Gnome just taking up a collection slot).

You really are trying to push the envelope of “but you can still get it free” to the limits to leverage that FOMO, aren’t you?

I’ll say again: $10 a quarter is a completely reasonable spend. What worries me is how many people might just shrug their shoulders, go “eh, it’s not that much”, and completely ignore the business model that caused them not to spend in the first place. I’m sure the company is counting on exactly this.

I will not be caving to the FOMO. My principles are intact.

Keep releasing new stuff that is time/RNG-gated for free players and given out like candy to people who buy this battlepass crap and you’re going to fracture the playerbase in a potentially unrecoverable way.

[edit] I’m VIP 6, not a “freeloader”. I’m just choosing to vote with my wallet - by keeping it closed.

If you are using a different currency/in a different country to the players you’re comparing prices with then the prices displayed may be different to these due to currency conversions or taxes.

It’s not a bug and it’s nothing to do with your VIP level. 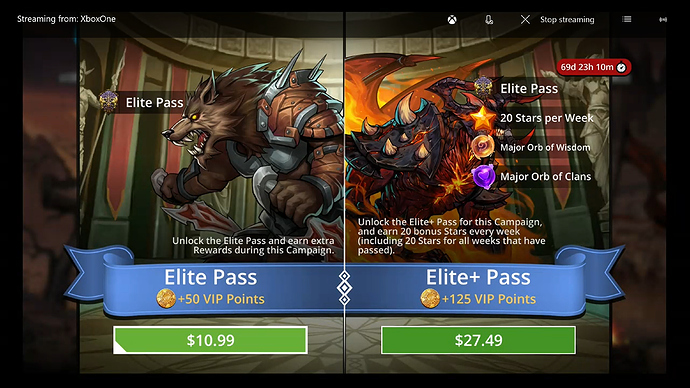 I don’t have time to export a screenshot right now, but the price is 9.99 USD on PS4. However, the box under the Elite+ pass is completely blank - no price listed there at all.

Campaign Tasks for this week…

Thanks to alansirer for providing Silver 2-4.

what’s the price on steam/google?

Prices vary from platform to platform too, I’m checking with team though just in case.

Heart of Rage – This troop will not be going into chests, however players will have a chance to earn him from defeating Cedric Sparklesack in the Vault after the Campaign ends. (Wondering what this guy does? He’s part of a very special Soulforge recipe. Stay tuned for more information on that in the next few weeks.)

I’ll elaborate on why this is bs, if that wasn’t clear yet. We just had a vault weekend and people probably just used up all their keys. I didn’t, personally, but I still call bs.

Not to mention, having things be limited to something so particularly difficult to reach is stupid. And its part of a soulforge recipe, which means … Zuul-like shenanigans?

Not 100% sure what the situation is with the mythic, it does say they’re EVENTUALLY in chests (below) but I don’t know about the Enraged Kurandara that we’ve seen in spoilers - not even clear what the difference is.

I’ll elaborate on why this is bs, if that wasn’t clear yet. We just had a vault weekend and people probably just used up all their keys. I didn’t, personally, but I still call bs.

I’m less concerned about this because we still have 10 weeks to build up more keys, however I’m counting on a lot of players skipping spending them during Vault weekends in order to be able to try for the new troop right away after the campaign. And what are the chances Vault weekend happens right before new stuff is added to Cedric’s loot table?

@TheIdleOne
That’s 505 getting their money back from the redeem codes.

Never even considered that as an option. Lol

thanks, I’ll add it

Hey Devs,
A lot of people want to play your game right now. Which is a good thing.
So if you could invest into some “Elite” Servers so we can experience less lag as we “pass” between matches.
Then that would be great.

And what are the chances Vault weekend happens right before new stuff is added to Cedric’s loot table?

I feel like that was pretty generous. A Vault weekend with bonus gnomes so that players can earn additional vault keys before a new game mode that might require players to spend them.