I sent a PM to Salty a week ago and have yet to hear back so figured I’d try here as well.

We have a serious issue with our guild, Aes Sedai. The guild leader quit a few of weeks ago and ownership transferred to another member of the guild. That member was also not really active, posted a quick message saying we should feel free to remove him if we want not even realizing he was the new leader. He hasn’t been back since and that was now 12 days ago.

Our guild is really suffering. We’ve lost 4 or 5 of our most active members as well as a couple of others, plus we have a growing list of inactives. We’re talking people that have been in the guild for >900 days. Can you please set a new guild leader that’s active? If there’s some policy against transferring it to me as the requester, then another active elder member like “Jemmo?” would be good for the interim.

Below are a couple of screen caps so you can see the issue. 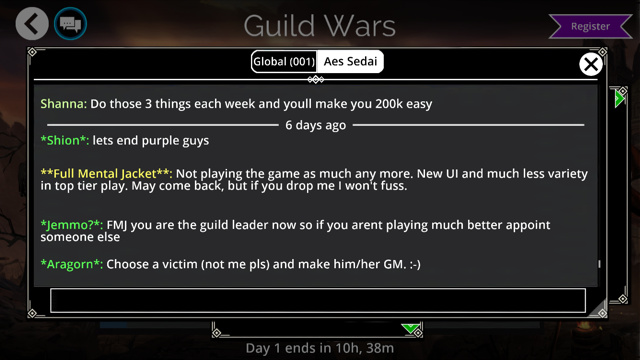 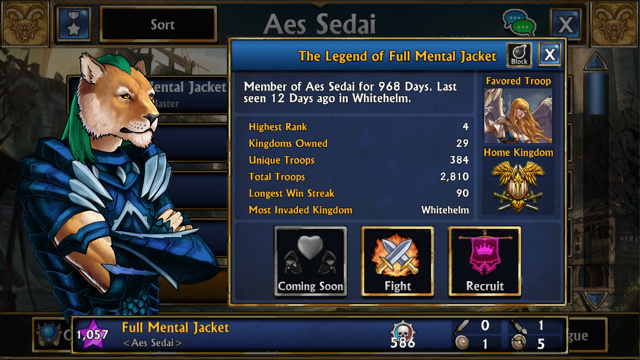 Apparently one of our other members heard back from support and they were told we have to wait til the leader has been inactive for 30 days. Despite having a screenshot of them saying they aren’t active and it’s okay to remove them…

This is a really dumb policy and our guild is basically dead as a result of this. You’ve literally killed a guild that’s been active for the life of the game and driven its members to other guilds after over 900 days in the guild. >900 days!!! Please rethink your policy.

Please also include some sort of “mutiny” option so the members themselves have some control over their fate.

@Saltypatra
@Ozball
@Sirrian
@Nimhain
@Andrew
I’m not a fan of “Mass pinging”, but for this urgent matter i believe something should be done as soon as possible. Also it’s understandable a certain delay since it’s weekend and probably none of you are at the office to deal with the situation.

After that a revision of your policy with timeframes based on the amount of days the guild exists could work. For newish guilds, simply disbanding the guild and forming a new one would be faster than waiting 30 days, but for old guilds with so much to lose, and no way to recover all the investiment it shouldn’t take more than 3 ~ 7 days.

The “Mutiny” option could be a mechanic allowing votes to change the Guild Leader, or other feature/mechanic to manage the guild itself when the Leader is absent.

I hope things get sorted out Studs.

I think our issue illustrates a really serious underlying issue. Guild Leader goes afk for 2 weeks, then quits and it passes to someone that’s been afk for a few days. New GL stays afk for a week and only comes back to say it’s okay to kick him not realizing he’s GL. Now have to wait 30 days.

2 weeks plus 5 days plus 30 days. So we suffer for basically 7 weeks and must pray he never comes back or it starts all over. We could be held hostage for months!

Guilds really need work. It’s awful enough trying to find a guild, and trying to recruit, then add this on top. And Guilds are absolutely core to the game too…

Edit: Sadly, I’m leaving my guild and it really pains me. I just can’t justify this indefinite limbo and the guild will never be the same.

I’ve been in your situation and I agree the policy needs review.

15 days (over 2 weeks) should be long enough to demonstrate that you’ve got a bogus GM. And that’s at the outside.

I suspect this is a case of a more-or-less random number being set in policy long ago and no one having time or authority to change it to a more reasonable number.

This policy was in place before Guild Wars. And 30 days wasn’t the big issue it is now that GW has been implemented.

So the 30 day policy is in place so a guild leader who can’t play for unforseen reasons (accidents, hospitalization, death in the family etc.) doesn’t have have to worry that they have been removed and kicked out of their guild.

We understand that 30 days without a guild leader can be serious (especial with GWs), and this is problem we have been discussing internally. The solution isn’t the change the policy, as we would still need to put a time limit in place that wouldn’t be advantageous for the guild being affected.

Instead what we’d like to do is change some of the guild permissions so 2nd rank guild members might have some of the similar permissions a Guild Leader might currently have, which allow guilds to continue to function without an active guild leader while waiting for the 30 days. This is something we’re trying to include once the Guild screens move over to the new UI in an future update (I don’t have an eta at the moment).

Ok,but in the meantime? This seems to be a special case. Couldn’t an exception be made for this guild?

They don’t make exceptions. Without going into too much detail, I know of another guild with a similar issue and they will not replace the GM until that account has not logged into the game for 30 days.

Without going into too much detail, I know of another guild with a similar issue and they will not replace the GM until that account has not logged into the game for 30 days.

The whole issue just sparks the idea that things can be better handled by the players hands, in the sense, that it would be better to have a “Placeholder Account” as GM with password/linking being shared among the other heads of the guild. This way, if one of them is absent for any reason, then, the others can manage things. That is, until they change the permissions for the secondary ranks in the guild, but since there is no ETA it would be better to sacrifice 1 Guild Spot to avoid colateral damage to the others 29.

Thanks for the response! I understand the policy and the need for policies, so I don’t begrudge you for that and I appreciate the explanation. I’m sure I would be very upset if I worked as a guild leader for 3 years to build a good guild then was booted b/c I had a medical emergency and was unable to play for 2 weeks.

The issue is that there’s a systemic problem with the most core part of the game that can have hugely detrimental effects on dozens of players at once. From my view, the entire game hinges on Guilds, so this experience shouldn’t have such a glaring weakness.

Perhaps there needs to be a new rank that gives the power to do everything the Guild Leader can do EXCEPT kick the Guild Leader? That would prevent a guild leader from being booted while enabling a guild to carry on in the interim.

I also think it would be great if it were easier to pass ownership to someone else. I believe you have to do something weird like demote yourself then promote someone else. You also can’t just leave as leader (only disband).

There are some really big quality of life issues here that should be prioritized. If you’re going to make guilds central to the game, then guild joining, recruiting, and management needs to be rock solid.

…once the Guild screens move over to the new UI…

ARE YOU GOING TO MAKE THE GUILD SCREEN ALSO LOOK JUST AS HORRIBLE AS EVERYTHING ELSE ??? THE LAST PIECE THAT’S LEFT OF THE OLD UI AND THE REAL HEART OF THE BEAUTY OF GoW ?

Tell us what’s so wrong with it.
Tell us there is an option to refuse to use it.
Tell us you are not completely ignorant of the 400 voters in favor of the old UI?

While this is a valid complaint and I encourage you to air your feelings on the matter, it is off-topic in this context. Please use another thread, such as the following:

Please direct all feedback and ideas to this thread. Go forth and leave feedback, ideas and suggestions.

@Studs I’ve been granted control of the guild (I’m Jemmo?). I assume FMJ left and handed it over. Thanks for your efforts here. I’ll be trying to recruit some new active members here so if you want to come back we’d love to have you.

Join AES SEDAI and fight the dark one

Aes Sedai are once again recruiting active wielders of the one power to fight the dark one. Rumours you may have heard about agents of the black ajah are baseless. We’re a pretty casual group with some members having been around for 2 or more years. We aren’t strict on requirements and understand that life is more important than games. That said we’re looking for active players who are able to contribute with 3 of the following 4 things: Fighting regularly in guild wars 500+ seals each week 1…

Perhaps there needs to be a new rank that gives the power to do everything the Guild Leader can do EXCEPT kick the Guild Leader? That would prevent a guild leader from being booted while enabling a guild to carry on in the interim.

This is something I’ve wanted to see for a while and makes perfect sense. Not much of a down side to it compared to the current alternative.