About orbs and crafting

The same is probably true for the orbs of wisdom: regular for one trait, major for all three.

However I came across this in the Soulforge: 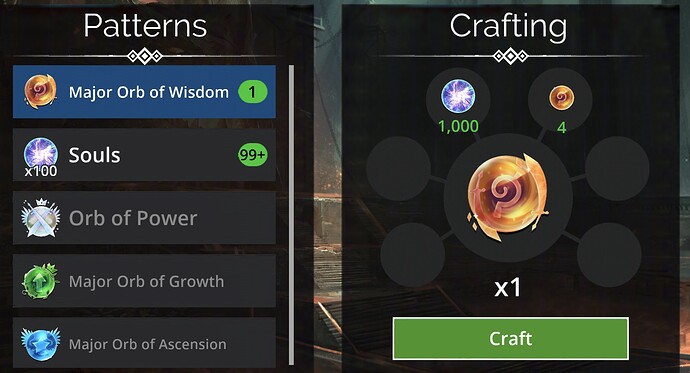 I think it’s strange that I have to use FOUR of these to craft one major, effectively losing one trait in the process.

Or am I missing something obvious here?

So I missed something, but not very obvious to me at least.

Its a resource trap. The only functional use is to advance toward crafting Zuul’Goth, and if you have to craft regular orbs into Major Orbs to do so, you probably also can’t get Zuul’Goth period.

Fun fact there! I did some napkin math to see just about how far ZG is out there. There’s a good bit of variability, depending on your luck finding Major Growth and useless Clan orbs, but for someone who earns 4 minor and 1 major orb of chaos each non-GW week, you can expect to craft Zuul’Goth in about 1 year and 10 months.

But wait, it gets better! If your guild doesn’t max put everything on raids, and misses the last reward of 1 major orb? You’re looking at 4 years.

But wait, it gets better! If your guild doesn’t max put everything on raids, and misses the last reward of 1 major orb? You’re looking at 4 years.

I had a slightly different estimate for the first number, but it does depend largely on when you get your orbs of growth, so I’m fine with that. With average luck, I’m estimating you’d be closer to the two and a half year mark, and that is assuming equal distribution, and it could still be much much worse than that, but below 2 years without a top 6 leaderboard reward is in the realm of possibility with extremely good luck.

However, if you don’t get any raw major orbs of chaos, the numbers for getting Zuul’Goth are much, much worse, to the point of pretty much being impossible, hence my earlier statement that this is entirely a resource trap.

If all orbs types are equally weighted, you are hard bottlenecked at getting enough major orbs of growth. Therefore, if you are stopping just short of that final event prize every week, are not on the leaderboard top 6, and only get regular orbs, it would take you much longer. For the bottleneck alone, you’d need 4 (assuming 1 in 4 drop rate) * 20 (to craft 1 major growth) * 3 (3 greater required for a single orb of power) * 8 (orbs of power required to craft) regular orbs chaos drops required to craft zuul’goth, which, at 9 regular chaos orbs (4 for stage 11 invasion, 4 for portal 9 raid, 1 for inner fortress personal reward) given every 3 weeks would take 640 weeks, or 12.3 years to clear your bottleneck (by this point, you’d have way more than enough of the other orbs unless you used too many). Even assuming Orbs of Growth are weighted 5 to 1 to 1 to 1 (and not seeing this ATM, really, but this would be peak optimal distribution toward getting zuul’goth besides clans being a thing that exists), you would still need a total on average of 32 (total amount of orbs needed to see 4 wisdom, 4 ascension, and 20 growth, and the 4 unused clans to fill out the drop tables to get one greater of each) * 3 (of each greater required for an orb of power) * 8 (orbs of power required for zuul’goth), which, again, at 9 orbs every 3 week weeks would equate to 256 weeks, or 4.9 years, and thats a best case scenario on drop rates and distribution.

The only way you’d close to 4 years is with perfectly optimal distribution with zero orbs of clans dropping, which would be 224 weeks, still 4.3 years. You would only be able to influence this very slightly with an absurd amount of grinding during vault events, unless Bounty has a completely broken reward structure enough to overshadow guild events. Another one or two regular orbs per month on the event and extreme luck might get you to within four years, which, I should remind everyone is longer than the game existed by six months and the total sum of which is longer than the life cycle of most games of this type, period.

Basically, if you don’t get raw majors orbs of chaos every week, Zuul’Goth is not realistically possible in the first place, and given each orb has less function than the sum of its parts, not worth doing.

tl;dr: Everything on this crafting tab is a resource trap.

Basically it’s a stupid currency. It’s not meant to be efficient, it’s meant to entice endgame players to buy gems to get 1 lousy troop a year from now. For the endgame players that post here, it seems this is widespread known. But the leaderboards are full of suckers racing to be the first to have the “I paid a lot of money for a troop I never use” badge. I’ve been arguing it isn’t pay 2 win, but I don’t think I’ve ever seen math confirming you can buy all the raid shop tiers 2 out of 3 weeks without paying dollars. Personally, I see the leaderboard as a list of fools.

But psychologically speaking, having that leaderboard helps push weak-minded people prone to compulsion into thinking, “Oh no, orbs are obtainable and THOSE people are getting them but not me!” So they do whatever it takes to try and catch up. It’s like McDonald’s mailing coupons to an eating disorder support group.

It’s a thing that’s helping me get more and more bitter about the game.

It’s really really weird that there is no way (that I’ve noticed) to turn money into orbs. Every other currency is purchaseable with either money or gems. Orbs need either an exorbitant individual effort or a dedicated guild, but still require you to purchase sigils with gems and then spend time/sigils to get the orbs.

Another part of the psychology of F2P games is “sunken costs”.

If you spend a lot of money to get stuff, you feel like you’re “losing” that stuff if you quit. This is strong, and keeps a lot of people hooked. (This is what leads gamblers to keep playing in the hopes of recovering losses.)

If you spend a lot of money, have to band together with a social group, AND spend a lot of time to get a thing, it costs a lot more. And when you think of quitting the game, what comes to mind is, “I can’t let my guild down!” Your guildmates will help reinforce this decision. The forums will talk about how sad they are to see you go. You’ll look at all those orbs you DO have and think, “Yeah, one last Invasion then I’m done.” But it won’t be the last.

It’s very, very F2P and one of the sleazier things to exploit, but extremely important when you want people to pay $1500 for your game instead of $60.

Yep, thanks for the in-depth analysis. As I said, I just did napkin math, weighing orbs equally and taking 25% off for clans. If the devs made minor growth give 5 levels, and only required 4 per major like everything else, we’d be a lot closer to my numbers.

On the other hand, thanks for assuaging any worry I had over spending ascension orbs to save Gems.