They say the souls of the most ancient dragons can never truly be destroyed.
Just as their God-Spirit, the Dragon Soul, can resurrect upon his death, so the souls of the ancient ones can reform over time and return to the world.

Once, the undisputed King of the Northern Forests, he was defeated by the first Wargare and the Forest Guardian - a physical manifestation of the very thing over which he claimed dominion.

Over time, the tattered remnants of his spirit fled back to Dragon’s Claw, and began the long process of healing and reformation. Now that process is complete, and Elemaugrim is ready to claim vengeance upon all who opposed him!

Let the key throwing to get this begin!

Cool name for the third trait…

Confirmed in chests - just saw a guild mate get one in chat.

Last SIX mythics I dump all my keys and I haven’t gotten any of them. Currently Elemaugrim, Stonehammer, Ketras, Jotnar, Pharos, Wulfgarok, and Gard. I did manage to pull one Abynissia, but missed Draak before her.

Dumped everything I had. 1,000+ glory chests, 200 gem chests, and 7,000 gems. No luck this time. Lame but by the looks of it this mythic is meh. So not as disappointing as when I missed famine and gard

People will hate me, but I’m going to claim birthday immunity… 350 Glory keys

My birthday was the 28th of April! My luck wore out

Was not expecting this:

you took away luck of 10 ppl XD 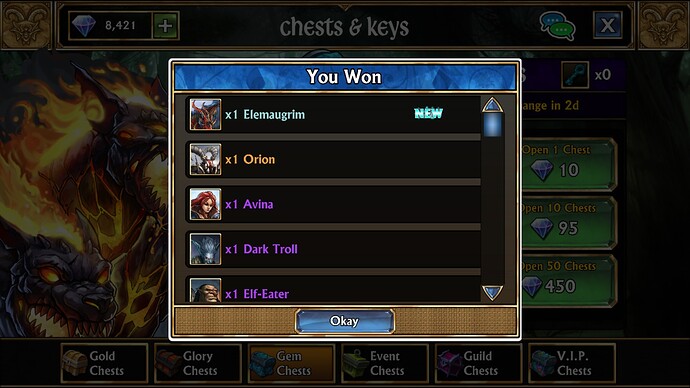 600 glory keys i was jumping on my bed it made me forget my fever, good luck guys!!!

So I’m fairly new at the game and does this “exclusive” means the mythic will have increased drop chance for this week and later on added to the usual card collection and will have regular drop rate same as other mythics?

Or does this mythic will be limited for this week only?

Means this is the only Mythic that will drop from the specified chests. Event Keys are not included.

This week only, all Mythics will be this one, so if you want it badly then drop all the keys. That being said, if you’re new then you’re better off going for all the Mythics and not spending on exclusive weeks unless, again, you really want that one.

just to be sure, so even the guild chest only contains elemaugrim as mythic, right?
Ty