Our first Holiday Event, The Lost Souls of Carmina, will begin at Weekly Reset on October 24th for Halloween.

This update is coming to all platforms except Amazon and Switch who will be receiving it at a later date.

I read that as the animation resolves fully before the next door is clickable. Maybe someone who hasn’t done the dungeon yet can check.

You are correct. Just tried this.

@covertmuffin123 is correct, the game now requires the animation to resolve before you can open another door.
Just to prevent multiple doors from being clicked in quick succession, which was causing some issues.

I’ll edit that line in the patch notes to clarify this!

Thanks for the “blue squares” in Dungeon UI

Dungeon shop is displaying correctly now. Dungeon main screen still isn’t.
All I can tell, is my dungeon level is 1?. Would have to calculate back from the shards value to tell the exact number. 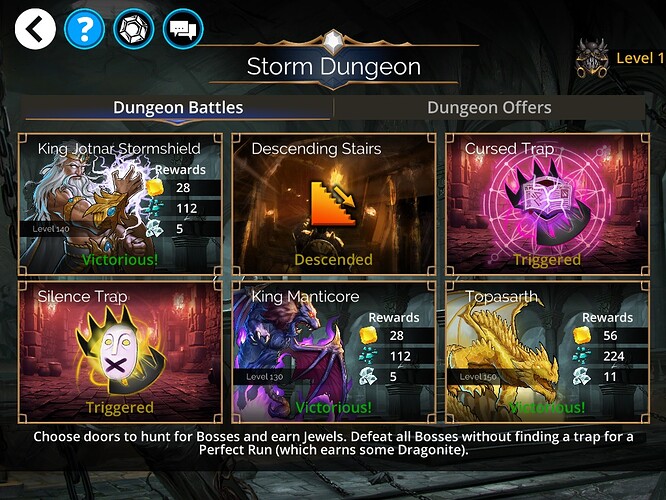 I read that as the animation resolves fully before the next door is clickable. Maybe someone who hasn’t done the dungeon yet can check.

Appreciate it. I did my daily Dungeons already so I couldn’t test it.

@Jerog are you playing a custom screen resolution?

I had the same issue you just showed with a custom size, but I have changed my resolution to one of the standard resolution in-game and it has since resolved itself.
This is 1176 x 664 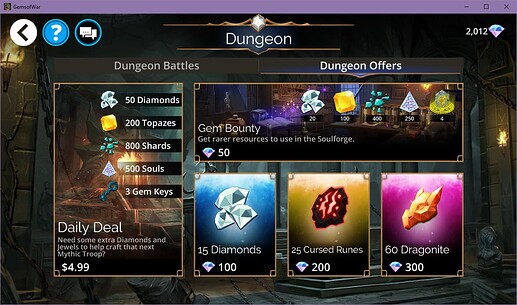 are you playing a custom screen resolution?

Nope, regular 1024x768.
And as I said, gems in the shop are showing fine now. It’s the level number, that is still broken. Added a screenshot up there.

And yet another set of PQ3 functionality finds its way over into GoW.

Just a smidge more than coincidental at this point. Just saying.

Having an issue with the screen resolution display on iPad - I cannot access the settings cog in the battle screen so I’m not able to view surge stats and retreat. Plain as day on the iPhone though.

And yet another set of PQ3 functionality finds its way over into GoW.

Just a smidge more than coincidental at this point. Just saying.

At this point, they’ll probably copy/paste everything over to GoW. Beats coming up with new ideas. 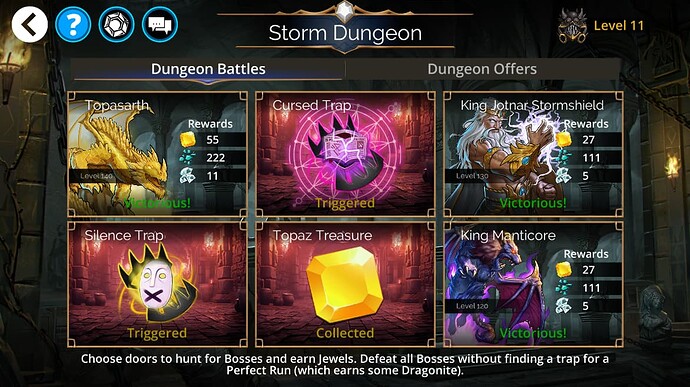 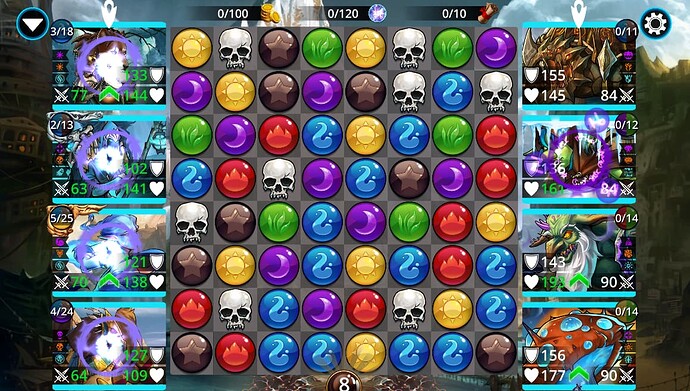 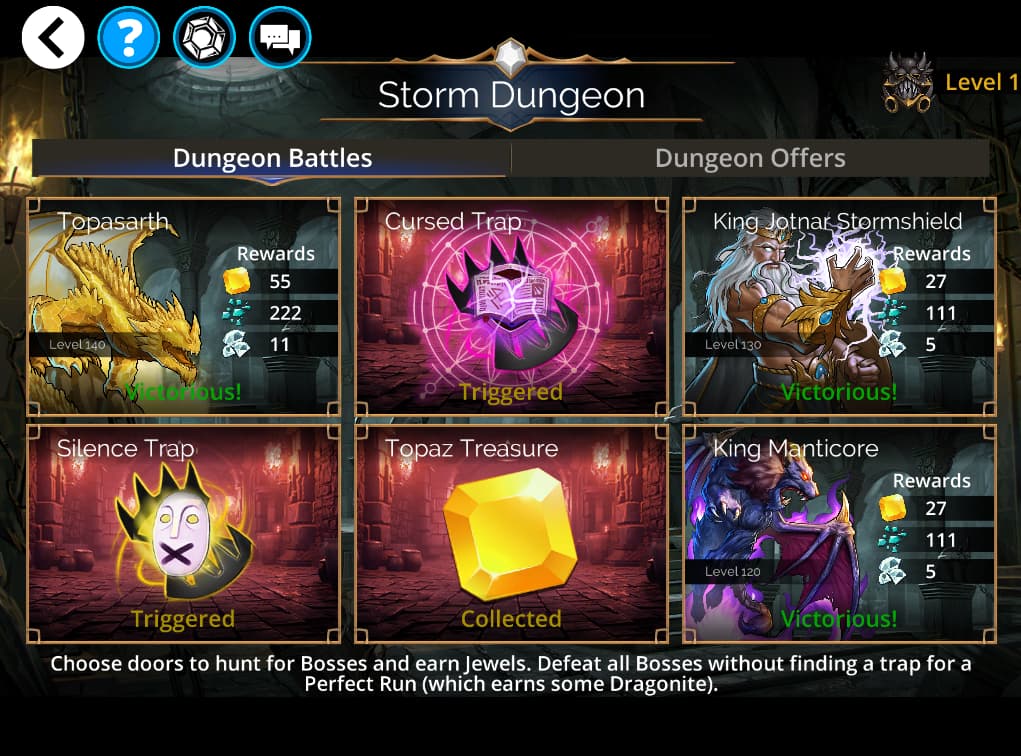 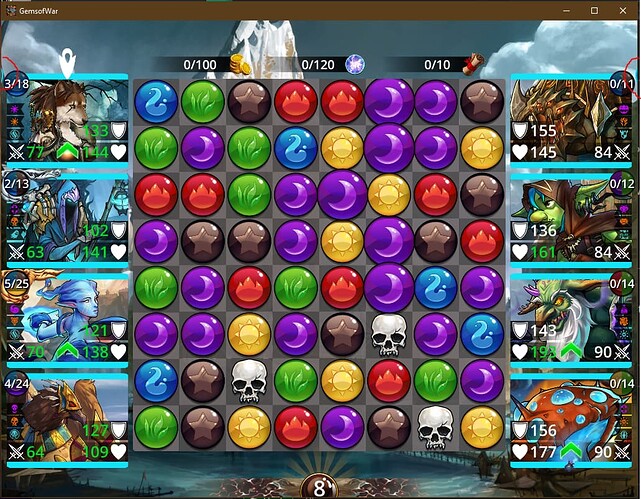 This works with both resolutions (screenshot with 1024x768) 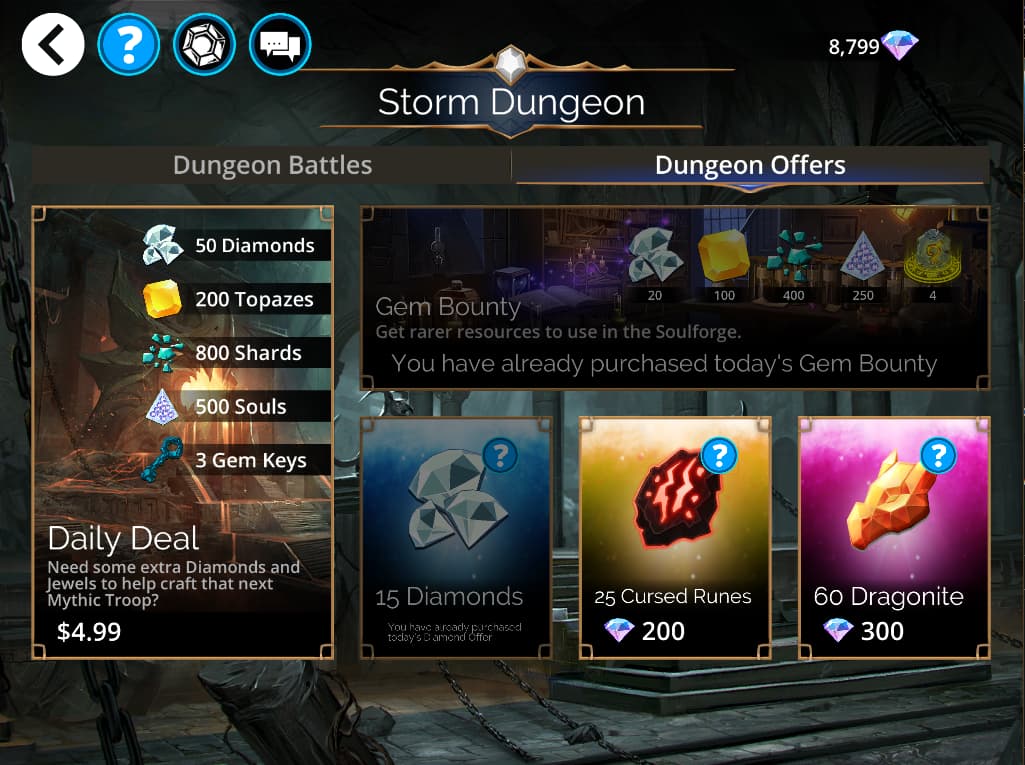 The first one ought to be easy so long as one logs in to play the event. But the second trophy/achievement? Sounds to me like another of those unnecessary time-sinks to pad the amount of time we spend playing. To those of us who have been playing for a while, Orbs of Power are pretty common and pretty useless if you’ve crafted the troops that require them already.

If this is going to be a thing, could we please get something new and useful to do with those Orbs? Or for most of the others that are gathering dust in our inventories?

Is my memory playing a trick on me or the Zhul’Kari art was updated? Is that a bug? 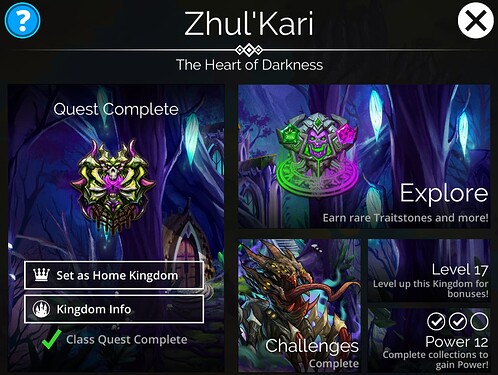 Has anyone on Xbox gotten the update yet? I’m not seeing it.

Is my memory playing a trick on me or the Zhul’Kari art was updated? Is that a bug?

I was doing a couple of challenges while I had a few minutes to kill after my game finished updating and I thought the same thing. I could swear that the Spider Queen I met in one of those battles had a different-looking background, enough so that I paused and took a closer look to make sure exactly what troop I was facing as it didn’t seem like anything I was used to seeing.

You are right.
On Switch it’s still an older artwork with way less blue but grey and no door inside the tree. Also slightly different artwork at all.
I’m too lazy to upload a pic from switch atm

The artwork is similar as the 5th pic in the guild menu for the background.

Hi @Jeto, are we still getting the Broken Spire Kingdom Rework Update?

We have fixed an issue where Troops could be summoned and gain the traits of the decreased Troops from the same team slot.

This is huge (if true). Thank you for finally fixing this issue.