Unless I’m misunderstanding how these tasks are completed. I don’t think they’re like the Adventure Board, where you have to actually fight specified battles in its own game mode for resources you (usually) don’t want.

I would assume the tasks in each tier have to be completed in sequence, to push you firmly towards paying the 150/100/50 gems skip cost.

It will be bad for those who buy the best passes (probably), and that sucks. But because it is going to hurt their gold economy by increasing their team score, it might help those who don’t buy passes face higher teamscores and — thus — earn more than they currently do, not less.

Nope, the teams score difference between the Free Pass and the Elite+ Pass is too insignificant to matter much. The team score gained from any of the passes is so huge it seriously tanks you PvP gold payout. Which in turn means if you can avoid gaining that extra team score you’ll be in PvP heaven, because it makes the difference between getting 1k gold fights and 2.5k gold fights if your natural team score is high enough.

Weird event, to benefit most are are required to avoid it as best as possible.

Seems to me, that any task that requires you to use/open keys or diamonds is disadvantageous. So looking at the rewards, as has been stated, why bother? Sincerely, why are there things like gold keys on there… /shrug

Seems to me, that any task that requires you to use/open keys or diamonds is disadvantageous.

It’s not just keys, needing to spend jewels on some summoning stones you wouldn’t want to craft falls into the same category.

It’s not just keys, needing to spend jewels on some summoning stones you wouldn’t want to craft falls into the same category.

Yep, yet another thing you don’t want to do.

I’m not sure the line that’s always peddled fits with content - in this case, campaign rewards. The line that goes something like ‘new players need them’. Any new player would benefit more by getting more important things such as writs or deeds.

Average of 3.6 imperial deeds by month since introduction and we get gold keys for completing things…

Do you have an image of the new mythical troop? 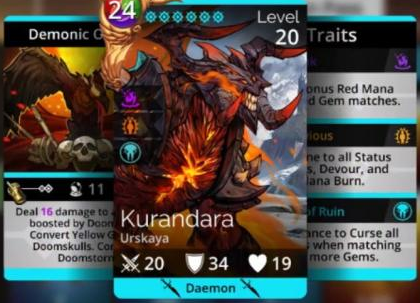 With the increased monetization of the game over the past few updates, I have patiently awaited what 5.0 would deliver. In terms of a “major” update, almost two years in the making, it is incredibly underwhelming.
Regarding what is there - The concept of the campaign is not bad per se. It does provide another game mode, albeit simply an amped up version of adventure board and old snotstone chores. I am not surprised or even terribly alarmed by the movement away from F2P with the advent of the elite campaign pass options. However, it is very disingenuous to paint this as anything other than a hard turn into P2P or, at least, play to realistically keep up territory. Yes, the mythic troop and weapons that are available via the elite passes, will show up for the F2P players in the Soulforge (and, I assume, key drop pool for the mythic troop). One mythic troop and two weapons will require 10,000 diamonds in the Soulforge. As diamonds are gated very tightly, it will be impossible for players to keep up that do not purchase the elite passes. The vast majority of players cannot collect that many diamonds in 11 weeks. And then a new campaign will start with a new mythic and new weapons. And this is not factoring the new epic troop and pet you get with the elite passes as well. For newer players as well as more seasoned players that may be 8 or 10 troops and/or weapons from a full collection, the hope of competing that collection without purchasing he elite pass will evaporate. Now, I do believe that $10 is very reasonable regarding cost for what one will receive, but it still represents a true turn to P2P territory. I really feel badly for the VIP 6+ players out there who have spend hard money on this game in support of the product and now have to decide whether to pay more and more with each campaign. I am not a VIP 6+, nor will I become one but I feel that VIP players of a certain rank should probably get the elite passes for free - they have spent their money in support of the game already. But I digress…The rewards for a 10 week campaign are almost laughably lackluster. I would expect those rewards for a week or two episode. But two and a half months?!?
Regarding what’s not there - pretty much everything players have been asking for, sometimes very logically and evidenced well, sometimes more in “torches and pitchforks” mode. And many of these desired changes have been requested for YEARS. Arena overhaul, treasure hunt overhaul, addressing delve progression to level 500, class trait changes, troop balancing, consistency in spell and trait wording, increasing mythic troop a liability in the Soulforge. I could go on…
If the developers are not going to make any of the above changes, fine. Tell the playing community and move on. But over the years, they have informed us that changes are being worked on, or looked at, or “upcoming”. They should commit to making the changes within a year or simply inform us they will not happen. It’s the vague, perpetual limbo that irritates and infuriates the community.
That being said, I am not surprised in least by the paucity of this update. Nor am I outraged or thinking about rage quitting the game. It’s just another nail…

One mythic troop and two weapons will require 10,000 diamonds in the Soulforge.

One question… how are you arriving at this number?

That’s 4,600 diamonds, which is quite far away from 10,000 diamonds. Yes, this is still a substantial amount of diamonds.

as more seasoned players that may be 8 or 10 troops and/or weapons from a full collection, the hope of competing that collection without purchasing he elite pass will evaporate.

How? If they are craftable, they are not perma-locked away. Period. Full Stop. Just because they are not available on Day 1 to F2P players does not mean that it will be impossible to complete a collection.

How? If they are craftable, they are not perma-locked away. Period. Full Stop. Just because they are not available on Day 1 to F2P players does not mean that it will be impossible to complete a collection.

But the weapons collection are impossible to fully complete for free. And have been for years (maybe those who started from the beginning can do it for free.)
But now it’s a “big deal” because the update is so “unfair”.

Your right! Bad math on my part

OK, maybe not impossible to reach a full collection but with a new standard mythic being released each month with another campaign mythic being released every 11 weeks, the troops and weapons release schedule will outpace a player’s diamond collection rate. That is unless a player is incredibly lucky and is always able to grab the new regular mythic troop with keys, seals etc. without ever having to forge it later.

Catching mythics on release is now even more important. I fear for those people needing quite a few mythics.

I now regret crafting a second TPK and megavore recently and an extra few summer imps! I nearly crafted Pharos Ra again too.

Much better and more concise argument.

That, I agree with. With another quarterly mythic being added to the game on top of the monthly mythic releases, there is indeed added pressure from the perspective of trying to catch them all.

Every mythic isn’t needed for game progression… yet. Someday, it might. But, for now, players only need one mythic per kingdom for progression purposes. That’s still a high hurdle to clear though for some, especially newer players.

Devs said that not every campaign will have a Mythic. So we don’t if it will be feasible or not to farm enough diamonds to get them.

The list of “we sold these for cash and will now never release them” are the 1st locked behind it. No flash offers, no crafting, just no way at all in any form of getting them. The 3 Im missing are from this list and it annoys the everloving hell out of me.

Devs said that not every campaign will have a Mythic.

They also said all weapons, no exceptions, would be available in the forge. Maybe they’ll add legendary troops instead, maybe they’ll throw in the next Dawnbringer, maybe they’ll offer a Book of Deeds for kingdom upgrade levels above 15 that would otherwise cost 10k Writs to craft. It will be something that can not be farmed in sufficient amounts by F2P players, because that’s the theme that has been set for 5.0.

We had a member go from 30s to BD a few weeks ago, and took SSs of their PvP battles, before during and after the transition. 30s finished 2 ETs I believe, while BD had finished them all.

This is the difference in gold that just the stats made: 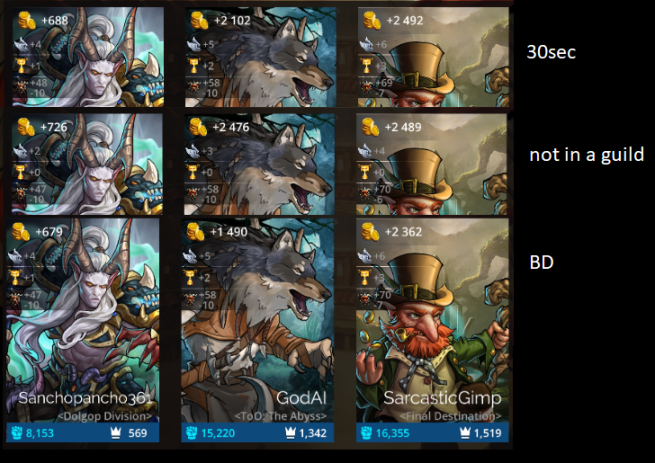 I agree there are going to be some who will refuse to do the campaign based on stat gain because of PvP.

But they can also do all of the campaign, without collecting the rewards. Every 100 stars, the Artifact is leveled up. You have to actually collect the rewards manually to get them, and the stat increase, so they would be able to finish it all, then on the last day before they log out, click collect, get all the rewards, and never have any stat increase.

Personally, Explore is a faster way to make gold though, by a long shot. But that doesnt change the fact that the entire PvP system is broken where being better, account progress wise, is a punishment and I hope the devs implement a temp hot fix for 5.0 until the entire system is reworked.

I hope the devs implement a temp hot fix for 5.0 until the entire system is reworked

Wait, the same devs that can’t replace a “spawn a random blue gem” with a “spawn a random doomskull” suffix on one specific weapon? Because the past two years this has repeatedly been found to be a task requiring an effort of heroic proportions? Hate to sound negative but you might be better off hoping a meteor hits their game server and flips just the right bits to fix the issue.

Thanks for demonstrating the huge difference in gold between fighting someone around your kingdom level and just 1k under you. That is just the difference we’ll see for people who elect to not do the campaign grind.