Maybe it’s a bunch of skiny people, so 2 persons can fit into 1 place?
Jokes aside it’s probably connected to server migration, but non the less you should screen shot that and send it to devs. 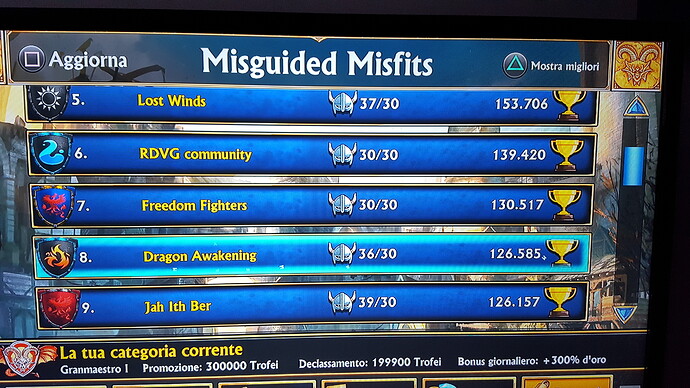 Must be the ghost members they did not erase properly.its says i have 33 in our rank 2 guild and 48 in our rank 33 guild.and theres 30 members in each.the problem i got now if i remove one.or one leaves.i cant replace them.because its says Guild full.

Could of put a picture of mine Thor.looool

I’m hoping it’s just a visual display glitch saying that there’s 37/30 people in the guild, but in fact the correct number of 30 players are present.

The bug where it’s displaying 30/30, but you actually have <30, is a much worse bug because not only you can’t invite any new members, your guild won’t appear in the in-game Guild Recruiting lists either.

Edit: Sirrian made further mention of this issue over here

Hey Guys, just had a look into these guild with more than 30 members. It was just a visual issue due to some ghosts haunting the guild.

We’ve opened some windows to let the ghosts out and the guilds should be displaying numbers correctly now.

Mine still the Same

I only changed the guilds shown in the screenshot provided above. If your guild is displaying more 30 members, I suggest contacting our support team here: https://gemsofwar.zendesk.com/hc/en-us/requests/new

Happy Days.Support it is again.Thanks.

In the screenshot, RDVG has 30 members, but we’re actually stuck at 24.

Thanks for the link, i’m going to open a ticket for that… and for the ‘crescendo’ i so happily saw and bought and didn’t recieve

I really appreciate the dev communication from you, sirrian, et al

Letting us peek behind the curtain takes (some of) the edge off of my frusration with the ongoing issues.

The link you gave to zendesk won’t accept ‘ps4’ as a platform even though it’s on the list, just erases a few fields and won’t submit… very frustrating.

505 support refusing to deal with this issue any longer. Guilds with problem are locked indefinitely.

developers even if you can log a request ignore all console requests.

my members leave now because guild can’t make seal count. its great to be so valued.

and now for the apologists…

'Thanks for reaching out to us at 505 Games Customer Support! I’m sorry to hear you’re having this issue. We are seeing some server problems with Guilds, but unfortunately we are awaiting fixes on the server end for most of these. In the meantime, you can reach out to the Gems dev support team directly: https://gemsofwar.zendesk.com/hc/en-us

They are better equipped at handling these requests than we are, ultimately.

What did 505 say in response to the issue? Seems odd that they’re refusing to deal with the issue any more. @Nimhain do you know anything about this?

EDIT: previous post updated with the message from 505. Is there a list for which issues should go to whom Nim?

'Thanks for reaching out to us at 505 Games Customer Support! I’m sorry to hear you’re having this issue. We are seeing some server problems with Guilds, but unfortunately we are awaiting fixes on the server end for most of these. In the meantime, you can reach out to the Gems dev support team directly: https://gemsofwar.zendesk.com/hc/en-us

They are better equipped at handling these requests than we are, ultimately.

‘ If you haven’t found the answers you need on the website, you contact us using one of the following options:

For Apple, Android, and Windows devices, click here to submit a support request.
For Playstation 4 and Xbox One, head to http://www.505games.com/contact for support.’

So that means I need to tell everybody that the guild is blocked indefinitely because 505 support no longer deal with this issue.

this is a waste of time being passed around like trash.

im sure @Nimhain or the other Gems of War dev can help you then.

unfortunately as stated above the developers do not deal with console requests. ignored mine twice.

perhaps for clarity i should repeat that again?

i do have the receipts though not any responses from the developers.

the 505 developers arent the same as GoW zendesk ones.

all i see is the 505 sending you to zendesk, and Nim directly asking you to send them a request (Nimhain along with other GoW devs deal with support tickeds sent via zendesk webbsite they cant touch 505 tickets - thats my understanding)

amazing denial of the facts. zendesk do not respond to these requests from consoles.

i will repeat because you do not want to accept this - zendesk do not respond to these requests from consoles.