Okay, so this might be a bit of a niche incident, but: 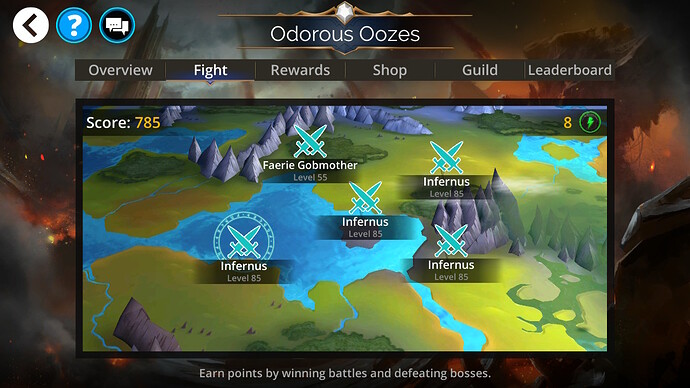 On Switch this week, our first Gold Campaign Task this week was to defeat Infernus 5 times – and, lucky for us, this week’s World Event allows Infernus to appear on the event map at any time, and (even better!) I was able to complete this task very quickly just by chaining Infernus battles back to back.

But here’s the issue – admittedly small, but creeping – after 5 wins, Infernus is now scaled to Lv.85 while basically every other encounter was still just Lv.10-20. Many battles later, my map is as you see here: filled with higher-level battles than the level of confidence (competence?) my event team can afford, despite the other battles still being much lower leveled.

Yes, I know I can spend multiple Event Sigils for a stat boost, I am no stranger to this (especially at the end of an event week).

But what about an alternative idea:

Again, I know this is an incredibly niche idea, but if I need to spend +2 Sigils (i.e. “Legendary” stat boost) to have a shot at winning a high-level battle on the event map, in some cases it actually can be more cost-effective if I could re-roll the map for a lower level encounter. (e.g: 1 reroll + 1 battle = 2 sigils < 3 sigils for 1 battle + Legendary stat boost)

I don’t think that’s compatible with the current implementation of world events. They use some kind of algorithm to generate the order of event battles and each player’s battles are picked from that set order.

I don’t think it’s a bad idea though, and using event sigils seems appropriate - I imagine some would use sigils for a chance to get better scoring battles, especially when you have only lowest scoring battles on the map.

The way I imagined it, all battles would change.

Not that it matters. Considering all the special scenarios (like battles that go away), I can’t imagine devs would consider doing it.

I don’t think that’s compatible with the current implementation of world events. They use some kind of algorithm to generate the order of event battles and each player’s battles are picked from that set order.

It varies with each event. Some of them:

This would not cause any problems in the first two cases…

What I mean is, the entire series of battles you will encounter is pre-determined. Or, determined on the fly, but using the same algorithm for everyone, so that everyone gets the same series of battles, the same “random”. If you’re doing an event on two accounts, you will see the same battle order.