Win a Custom Gems of War XBox One!

Want to win a custom Gems of War XBox One (1Tb) by playing Gems of War? Well, now you can! Microsoft is running a rewards program for free-to-play games and Gems of War is part of it!

How does it work? Well, I’ve grabbed this for you from the site.

“During the duration of the sweepstakes, Xbox Live Rewards members who are legal residents of Canada (excluding Quebec) and the United States who are 18 and over can enter to win a variety of prizes in the FREEdom Rewards Gems of War Sweepstakes. To participate, members must first register on the site. They can then earn extra entries by downloading the Xbox One game Gems of War from the Xbox Store if they haven’t already and playing for at least 30 minutes. For every 30 minutes you play, you can earn 1 extra chance to win, for a total of 7 entries per week.”

Let’s hope one of forum regulars is lucky enough to win!

PS, here is the XBox One! 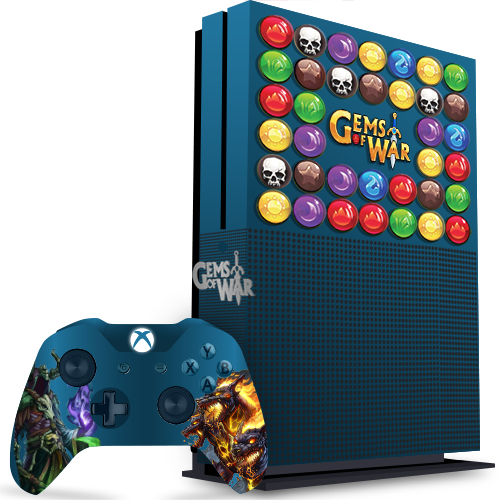 Thanks Salty! I’ve registered now, and hope to win something! It’s very fitting: I first got into Gems of War on Xbox One, before later getting on the PC/mobile version. It’s time to return “home” for a bit!

Edit: thought I saw a typo. But I didn’t.

Oh man you edited before I got to reply!

Even though I don’t play on console and personally dislike Microsoft in every way, I have to admit this is pretty darn cool.

To be fair, you’re missing a colon after ‘Prizes include’… but that’d be pedantry to point that out…

Welp no chance there.

You can blame Microsoft for that one, I lifted it exactly as it appeared on their website.

Shouldn’t need the live account part, the rules state you can sign up for one as part of all of it. But yeah, you would need the Xbone to actually be able to play GoW to get the entries.

At this rate, assuming other people who come across the page (who’ve never heard of Gems of War) pick other games to enter for instead, I might actually have an awesome chance of winning! Fingers crossed.

Got a bit excited until I saw this

legal residents of Canada (excluding Quebec) and the United States

It’s a bit stupid that you have to own an Xbox to win one. I have an Xbox One and an Xbox One S I don’t really need a third one.

…but that’d be pedantry to point that out…

Yeah, it would be very pedestrian on your part…

Best of luck to everyone participating in the giveaway!

Wish I could, but I don’t have an X Box, therefore no X Box Live membership.

Very cool. However, of all the fantastic gow artwork they go and plaster it with that? Oh dear! Good luck to everyone who enters.

Given the bromance, will entries from Russia be accepted?

What about players in Europe and the UK?

Oh, I like the looks of my new console.

We’re not good enough for Microsoft.