Which chest is better to try and get new Mythic

I’m probably in the minority but I have better luck with gem chests personally. I opened 250 vip chests and nothing. Used 400 gem keys and finally got him.

Well that’s luck for you. But I’m talking stats!

Yes, according to stats there is a higher chance in vip. But in my case vip has never proven to be worth the cost in that regard.

Yeah someone in my guild used 100 gems and got 2 new mythics. Talk about luck, lol.

Thanks! It worked! lol 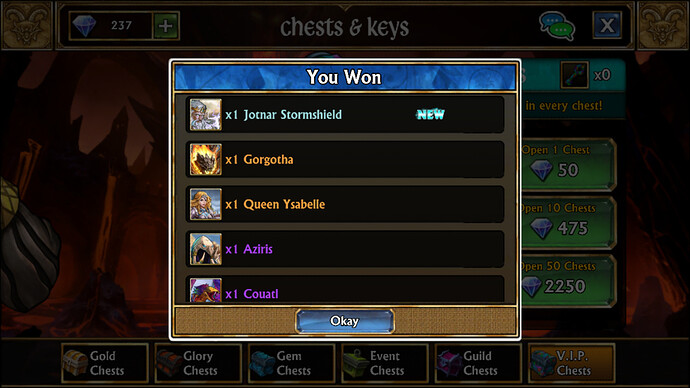 The RNG is so huge, I once long long time ago got a War from a code that @Little @Macawi gave to me. It was from one of Tacets or Krudlers videos I believe. But if it was not for that moment, I would still today had been without War…

A free mythic from a code!

The only Mythic luck that I’ve had in this game is getting 3 total Gard’s Avatar from 2 different chests back to back. 2 from a 50 glory chest, and 1 from 10 gem chests.

I don’t even use it, but it’s nice to know it’s a viable troop.

A free mythic from a code!

From a gem key, that was inside a code…

Sasshhhhsshhh, you’re ruining our chance to get a free mythic.