Where is the option to turn OFF this CRAP? 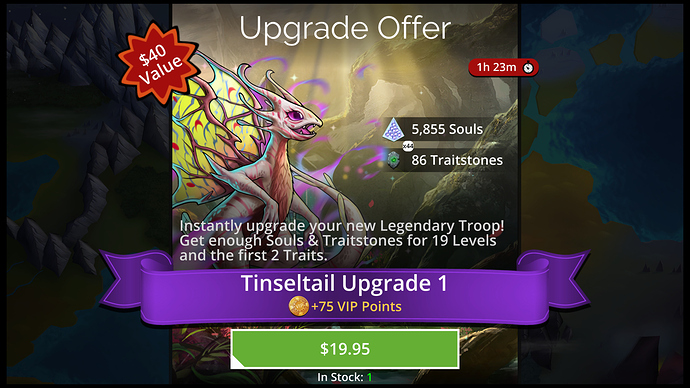 Also: $40 “value”? Just…what…how does one come up with these figures?

Also: Hurry because there’s only 1 left in stock!!!

Also: A huge countdown timer on my kingdom screen. Hey devs, we wanted a timer for our tribute not the latest ridiculously overpriced offer. I give up.

I always laugh whenever I see these things pop up. It’s such clear BS.

What I would love to know is who actually falls for this crap? Who looks at it and goes “wowee, gimme gimme!” ?

Don’t get me wrong, I’ve spent money on the game myself, but on things that were worth it.

Only the extremely wealthy or extremely stupid would buy these “deals”.

Weird, mine was $14.99. I commented to myself that was just close enough to my price point I could see myself buying one if conditions were right.

The two seem to go hand in hand 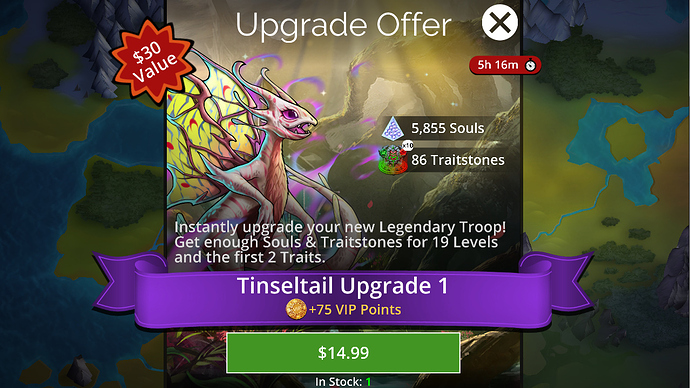 And here again I just got the Phoenicia offer. Apparently a handful of souls and traitstones is worth $90!!! Where do I cash mine in? I could buy a house on the beach!!

My offer was 100 gems for $2. This is a great deal on gems, actually—better even than the daily gems item in the shop. I’ve alerted all my guild mates about it, and I hope that someone will take advantage of this offer.

Yeah, a $2 is really tempting me, actually. This game’s been lacking impulse purchases forever! (Wow this sounds like it’s sarcastic but I’m serious, I’m buying at least 1.

Yes, these offers really insult the player bases’s intelligence. The devs or publisher needs to do some due diligence into their own player base market. I have a feeling they are trying to take advantage of any new players who don’t know any better.

Eh, I find real numbers often present horrifying facts. For at least a year, the devs have focused on bundles that cost $30-$50. I know this because I’ve frequently pointed out how it doesn’t add up that 25% of one team shouldn’t cost as much as “an entire console game”.

But I have to decide if this means:

The reality in which we live suggests that, among the probably tens of thousands of players, enough people are enticed by $30-$50 bundles to meet the expectations of the devs. For the other reality to be true, there’s no reasonable way for the game to have lasted this long.

Against the wisdom of the forums, GoW is making money. That suggests the number of people who run successful multinational, multiplatform games thus have domain knowledge and good insight on the forums isn’t very high. Instead it’s more likely people are applying their expert “I read a blog about supply and demand once” economic analysis combined with their many weeks of part-time retail employment to the problem and asserting reality is false.

It blows my mind that it’s working, but it’s also kind of crazy that bumblebees can fly. People spend thousands of dollars on Kentucky Derby mint juleps, so it’s not a stretch to imagine some people think an afternoon’s worth of traitstone farming is worth $50.

They can’t be making that much money if they can’t even afford to hire a couple staff to provide a level of customer service needed to get that poor guy his deleted gems back.

Well OK, you believe the other side. That’s cool.

I’m curious how much you think it costs to hire “a couple staff”. And I need to see your expert analysis of the financials of the GoW team.

I think you and I have had this conversation before. I actually run a small business so I have an idea what’s involved there. I know more than most how value differs from person to person and how price points will effect sales and profitability.
I know that 1 whale can fund an entire staff member’s salary. However, this current flash sale alone will make enough to pay a Devs annual salary plus. It’s the Ferrari vs Walmart debate. Both models work, but Ferrari has to deliver to its name. We are, after all, playing a “free” game.

…but what I meant to say was WHOOOSH

However, this current flash sale alone will make enough to pay a Devs annual salary plus.

I don’t really want to go around in circles on this, the content kind of depresses me and it’s very “how the sausage is made”. I think I got distracted from my main point.

Mostly I don’t think the GoW team gets a say in hiring. They’re owned and operated by other people. I have seen people in corporate environments try, desperately, to hire more resources for years but without the approval of the people that matter it doesn’t happen.

Without saying a ton of overly cynical stuff, I think the person who could allocate resources for more GoW support doesn’t believe for a moment there’s a business case to chasing these kinds of player requests. I don’t really care to squabble about if they’re right or not. There’s not really a way for us to argue with that specific person. They are judged by “did revenue increase” and that doesn’t always track player happiness directly. The people who spend the most disproportionate amounts of money are not happy people.

I like to think if it was just the GoW team, and there weren’t corporate ties, and everything was rainbows and unicorns, this wouldn’t be a problem at all. I can’t bring myself to believe popup offers and flash sales were a thing the team decided GoW needed. It’s easier to believe the people above them want to see revenue, have a playbook of how to extract revenue from players, and I imagine there’s some conflict between what they want to achieve and what the GoW team envisions.

So I’m frustrated and angry that all the anger is centered on the GoW devs who have to talk to us, instead of the invisible people who make the decisions they have to follow.

I haven’t seen enough meanness out of any dev to believe for a second if they could “just hire more support people” they wouldn’t have done it.