When a bug goes into a cocoon for a year and comes out a beautiful, and majestic feature. 😀

Are they not supposed to be in there? Myzmer is indeed a mystic troop so it shouldn’t be unusual.

It was my understanding that you were only ever supposed to get them from guild wars.

I am glad that they changed their minds and put them to the Shop Tiers.
I don’t believe that this is a bug.

GW troops are possible to get from Shop tiers since the release of the first Shop tiers in Raids and Invasions.

If it’s not a bug, then “Doom” troops should also be in the event tiers. Otherwise I’m just going off a conversation a month ago. If they fix it, great, if they don’t fix it then it’s whatever. Only the devs can ever know “what’s intended” or what’s “a bug”. 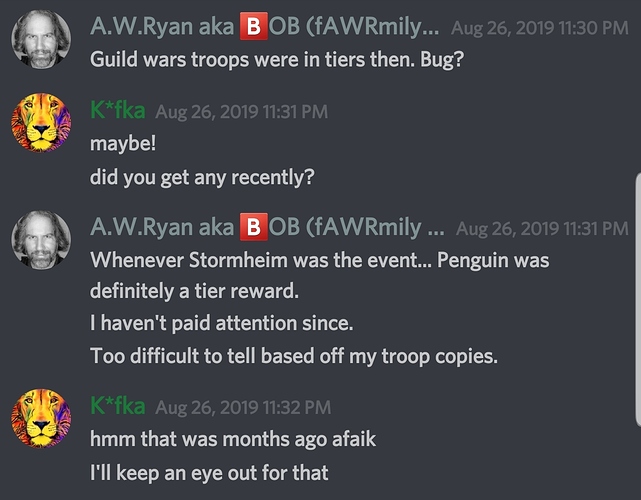 Following up with the team, thanks!

A new set of GW troops would be nice…

This is a feature not a bug

This is a feature not a bug

Great. Exclusive for only class trials or all tier shops? When we can expect Doom troops to also be featured there?
And are all guild wars troops available in class trials then?