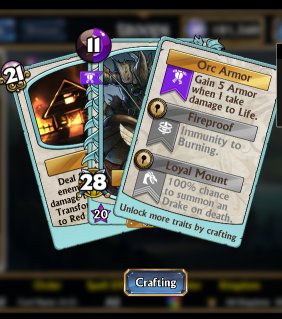 Good point. Try it and find out?

I’m too busy at work. If anyone got answer plz share!

It’s one of next weeks event troops along with Orc Veteran.

From the spoiler thread.

It summons at level one for the moment. Tested it last night.

Pretty sure the same happens with the New troop summoned by Summoner.

I didn’t get to test it out. And I haven’t had much opportunity today.

Good point. Try it and find out?

Given infinite traitstones, that would have been the obvious workaround.
But I have not been given those.

I believe that troop (Bone Daemon) should be in chests? Or at least that’s what I assumed based on the patches notes mentioning it, but not mentioning the Drake.

Bone Daemon makes its home in the Blighted Lands. The Summoner’s new summon will be going into chests with next week’s event.

Looks like we got to wait til next week.

I was hoping that a Drake Rider + Drake might be able to “survive” 3 Astral Spirits during this hellish week in GW, but that is not the case.

For me an Orc can survive two, which in that time you can get Gar’Nok charged to replace it.

Edit: But good to note for Red and Yellow days.

Only need 7 because he’s starts at 50% full. His last trait got changed.

Edit: needs 8 mana, he will start with 7. It rounds down.

Mercy is nice too, just don’t use on the first turn, unless your lead troop is already the lowest effective HP.

Or pair Werewolf with Forest Guardian and transform at the right moment!

Orc,alch,x,garnok…the dude can loop himself as it is starting 50%.

With X being a suitable Orc for the extra two gems he can spawn. I use a full Orc team and 22 gems he makes is awesome.