What do you think are the most valuable weapons?

When you ask me what the most valuable weapons are, I think about how much raw damage it can do, how devastating or potent the effects are and how frequently can it be used.

I figured I’d put together a video showing what my top 10 would be, but I’d love to see if you guys think I missed any from the list. 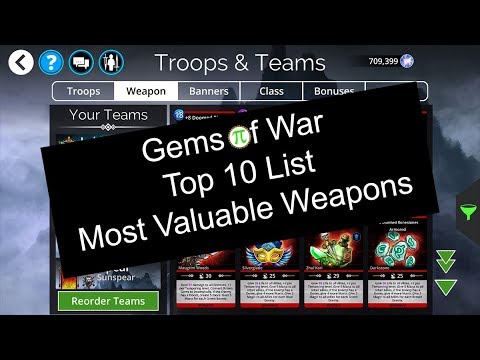 …what do ya think?

Honorable mentions:
Earth’s Fury, Trickster’s Shot: Fantastic weapons that I never use
Yasmine’s Pride: Fantastic weapon that I’m not using currently
Flammifer, Guardian Crown: Great weapons that I never use on offense…
Sky Hero, Skeleton Key: Good Weapons but I have only used in one team so far…
Anu’s Sceptre, Bronzelock Pistol, Eternal Torch: Useful, but I don’t use them much anymore…
Drill Shooter, Divine Protector, Elemental Bow, others: They’re still good weapons, if I ever want to use a themed team.

Thanx for the Vid and the Thread!

What about Ice Aegis?
I have it, never use it, but HATE to play against…

Same list as everyone else. Except Rope Dart at #1. It’s the Infernus of weapons, it does a lil’ bit of everything good and is always useful.

But mostly Life and Death.

Thanks guys. There are so many Legendary and Mythic weapon options, it’s good to know what will eventually be useful.

The most valuable weapon of all was Divine Protector. It taught players the devs might dramatically increase a weapon’s power after it’s not available. Thus every player learned they HAVE to spend resources on EVERY weapon.

I don’t think any single weapon has sunk more gems or dollars in the game’s history.

Been thinking about weapons lately, is there any reason Jack-o-Lantern isn’t more frequently used? Sure it’s the poor man’s Essence of Evil, but it’s probably the fastest exploding weapon available to the hero.

Dancing Daggers is another weapon I’m surprised you don’t hear much about - order-switching+decent all-enemy damage for a 14-mana cost.

Also, any of the newer class weapons stand out to people?

I have used jack o lantern with khorvash/st astra combo and warpriest. Half start and no color blocking make it easy to fill and the explosions really accelerate being enchanted once Astra casts. Statuses and stuns complement pretty well. 4th can vary, TPK/Obsidius can work, or others. Relatively safe on offense but not the fastest

I agree whole heartedly on Jack o Lantern. In my recently released Red Day GW video I had good ‘ole jack called out.

It isn’t the most exciting weapon, but the debuffs can help in the clutch and at a minimum you get some way of exploding the board for mana (and it burns the first enemy of fireblade is your thing).

Thanks for confirming my suspicions. Exploding hero weapons are strong in general, and while Jack-o-Lantern is overshadowed by JoE and EoE in many cases, I do think it has some niche utility at least.

Following up on my last post, here are the hero class weapons released since this topic came out that I think could be noteworthy: Thunderbird, Plunder and Peril (on defense, at least), and Fiend Fire.

Also, would you say it’s worth delaying crafting a mythic to spend diamonds on any of the following old weapons?

I’m thinking you can mostly get by without these (and it’d be better to save the diamonds), with the possible exception of Earth’s Fury (for delving with Irongut), but thought I’d solicit some opinions.

In event weeks with no good synergy, a tricksters shot hero can solo invasion/raid if you can keep it alive.
Thief class works well—stealthy, half mana start, and summons for skull fodder. Especially with potions for a quick first cast, and the +9 enchant self affix for the next ones, it can do tons of damage quite fast. Seems usually in one-shot range by 3rd cast.

I’d still put earths fury ahead. But Tricksters shot gives another great option besides the barrier-on-Brown and skull smash model. I use them both a lot. I’d definitely pay diamonds for either one above the 10-12 junky mythics I’m still missing. I don’t think I would delay a really “good” mythic though (like S tier). I’d probably delay some of the A tiers though.

There’s a lot more good options these days, so YMMV depending on playstyle

Dawnbringer is awesome in arena because you can fill it with 3 different color mana, which is crucial for speed because you can’t have an active banner. Grind them trophies$

I’ll say! I kinda glanced over it when thinking of newer weapons, but giving the quick affix to a “mix of” weapon is pretty good. It makes it so you don’t have to have a full goblin team, unlike most of the mono-type/kingdom weapons, and synergizes well with both new Zaejin troops.

you don’t have to have a full goblin team

For example: Goblin/turnip loop + Bloodwood… then again if you never drop the turn the 4x bleed stacks will never do damage