What do you have against Brown....Kingdoms?

Come February 2020. 18 Factions will have been released. That’s over half the Factions that are expected to be released with only 16 left over the course of the next year and half.
Not a single one has been linked to a kingdom that uses brown deeds. And as far what players can see… There isn’t going to be one anytime Soon™.
So on a design view point why omit the Kingdoms?
There’s going to be 16 Factions left and almost 1/3 of them will have to be linked to Brown Kingdoms.
From an outsider perspective, it simply looks unbalanced and frankly, a bit trollish. And if that’s the case, what good could possibly come from Franking with your player base who take the game much more serious than you do?

Sorry, I know all questions are supposed to be asked on streams. But I felt I’d at least try to hear the reasoning for what many are wondering.

TL:DR Did the devs and Brown Deeded Kingdoms have a bad break up or something?

I am more curious about the dev relationship with Orc, they have the 2 worst Mythic in the game, 3 non- notable Legendary, no class, only 1 notable troop in the whole Kingdom is Fist of Zorn.
Did some Orc kill Sirrian Dnd character on his first day and he have been holding a grudge since then?

Did some Orc kill Sirrian Dnd character on his first day and he have been holding a grudge since then?

In a matter of speaking… Sure.
Between 2-3 years ago they buffed Orcs. Buffed them so much in fact that they had to 2 major changes to the game.
It used to be the weekly troop kingdoms and troop types for a 25% buff to stats. So most Orcs had a 50% buff to stats after they buffed the troop. And basically broke the game. Back then gem spawners weren’t a constant back fire like they can be now. So the devs also introduced the “combo breaker” mechanic. That’s supposed to keep the player and AI (mind you) from getting too many extra turns from gems being spawned.

So basically once upon a time Orcs ruled Krystara for about a week or two. And since then they’ve been under heavy sanctions.

Now back to the Actual OP and topic… Why the Brown hate, devs?

Just play the game as intended: without a Brown kingdom delve.

Puddling is Brown…hence the hate.

Brown is so much better than FedEx

The naive smokescreen attempt constantly employed by the devs in which they attempt to hide behind their heavily biased RNG is ludicrous. You only have to attempt stonesong eyrie full faction to realise that your 5% chance to harpy summon is significantly less than the enemy 5%. 5% is 5%, except in this game where the understanding of mathematics is warped into nonsense.

You only have to attempt stonesong eyrie full faction to realise that your 5% chance to harpy summon is significantly less than the enemy 5%.

…what on earth does this have to do with this thread?

Stonesong eyrie is a brown and yellow “kingdom”. And how on earth does the final enemy troop manage to summon 3 harpies at the start of a turn?

Stonesong is linked to Suncrest, which is yellow, so it uses Deed of Air, not stone/brown.

I see. Try a little patience. You will get ur kingdoms boosted in time. Why is everyone in such a rush? All that that achieves is further content release and more frustration and dead ends. No such thing as an end gamer in this kind of thing…people need to stop using such an inaccurate term. Gow has and never will have a “true endgame player” until the devs/publishers stop content release whilst they create a new game.

I’d make a Cleveland Browns joke but all the devs are from Australia so that’s unlikely to be the cause.

Just two of the next three factions will be linked to Brown Kingdoms: Werewoods (to Urskaya) and The Deep Hive (to Drifting Sands).

Please be aware that our schedule is not set in stone, and often changes. Anything in Taransworld is subject to change.

not set in stone

I’m saddened by the answer, but approve the pun.

Scarlett as a narrator does not mean the faction belongs to Maugrim Woods.

Salty first said this 3 streams ago now, and said she was working currently working on the the script for the Urskaya linked faction. It’s possible she was mistaken, but she’s confirmed it twice now.

Anyway, I’d be happy if it was Urskaya. I already spent my deeds in preparation for it a few weeks ago. 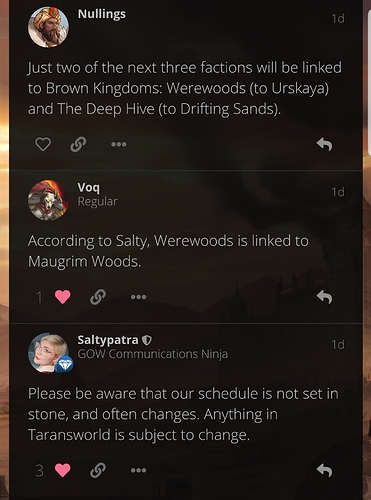 Well at least we finally got a Brown Deeded Faction… regardless of the messy lead up.
Thus closing this thread.