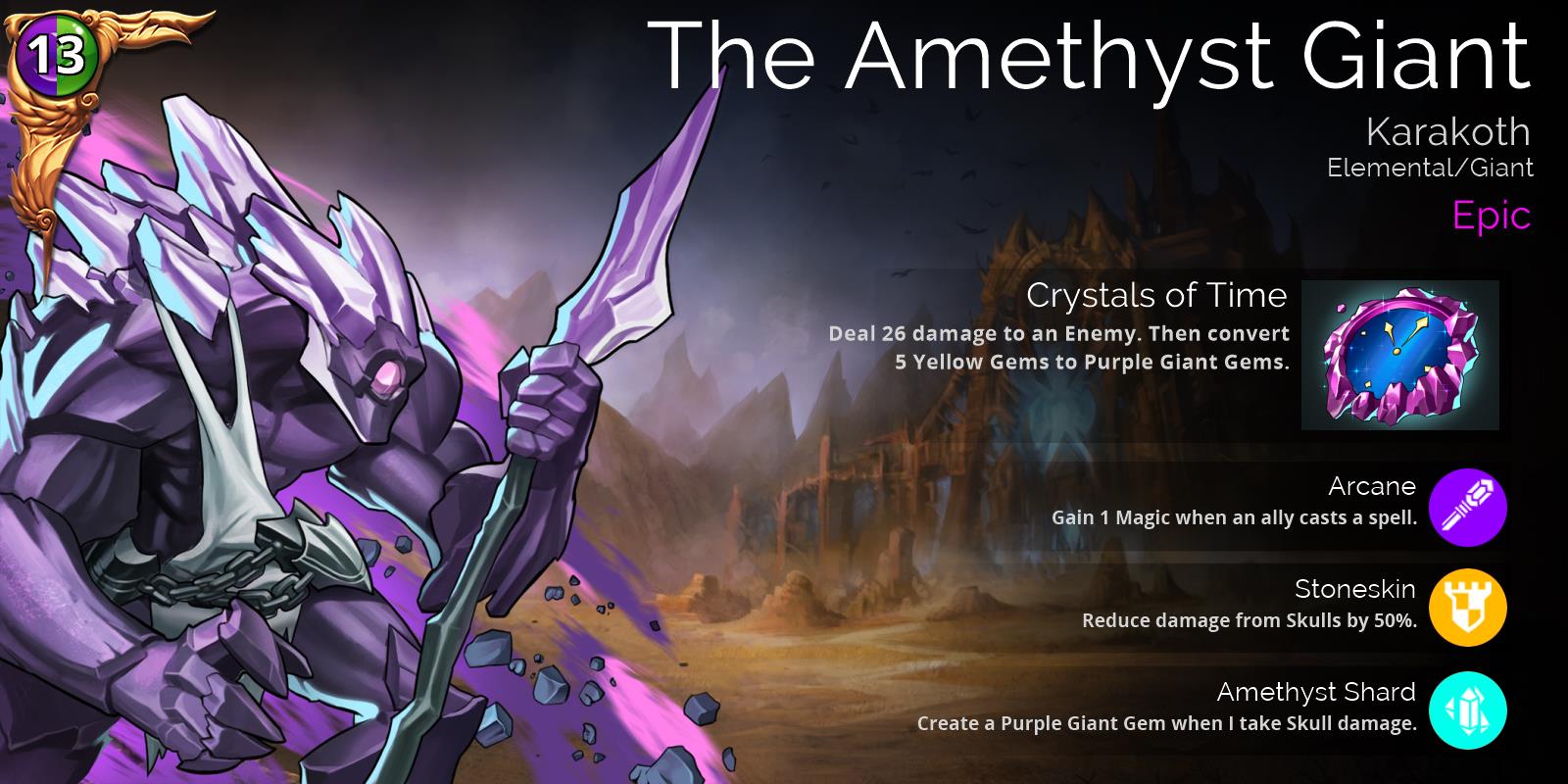 The The Amethyst Giant will be available this week for 400 Glory in the shop as well as in Event Chests, and will appear in Glory, Gem, and Guild chests in 3-4 weeks’ time.

There are 6 battles that players can encounter during the event: Cthyryzyx, Draxxius, Abhorath, Medea, The Archduke, and The Amethyst Giant. The first 5 battles are randomly chosen, but they all have an equal chance of appearing on the map.

The battle against The Amethyst Giant will only appear after the player wins 4 of the other battles. However, his battle will not hang around; if you don’t fight him immediately, he will vanish! Either way, after that, all battles reset, and you’ll need to fight another 4 to spawn The Amethyst Giant again.

Each Tome is worth 2 points, and each Amethyst Shard is worth 10 points. The battle against The Amethyst Giant will drop a variable number of Crystals (on average about 1.18x the base amount).

I suspect this thread will be visited more in any case, it’s been around longer and has more activity. If you don’t mind I’ll copy your post over here? 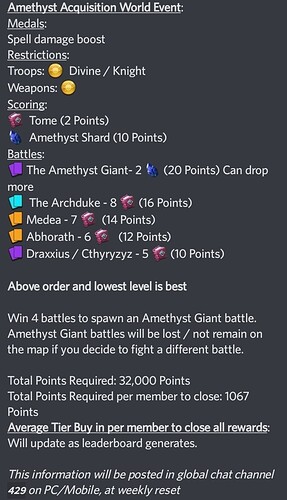 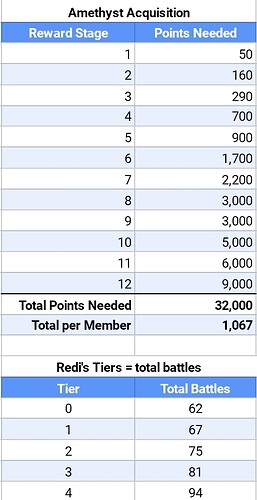 Average Tier Buy In per member to close all rewards is Tier 1 (~65 battles). Some will get it with Tier 0 because of Amethyst Giant battles ability to drop more shards. 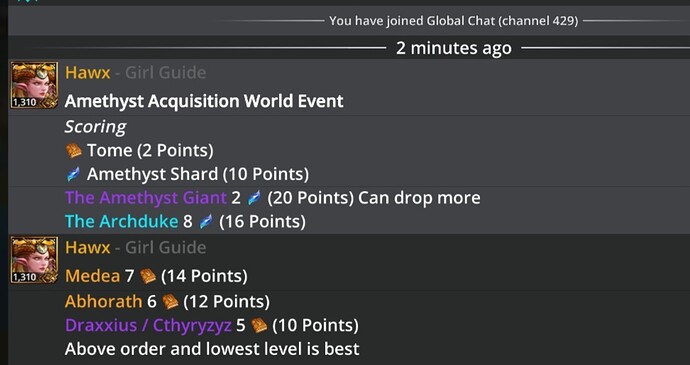 I suspect this thread will be visited more in any case, it’s been around longer and has more activity. If you don’t mind I’ll copy your post over here?

This is really bizarre, Graemes post absolutely didn’t show up in the list of new posts earlier which was why I made the post so I could have somewhere to post my guides. Really odd and it’s not the first time the forum has omitted posts for me. I’ve deleted my post now anyway as no need for 2. Crazy, sorry for duplicate post guys

It was quite a bit down in the list. I also didn’t see it at first, that’s my usual self on Monday mornings though.

It was quite a bit down in the list

Ah that might of been it then. I have an alarm set at midnight (even though I’m up for work at 4am lol) to wake up to check the official scoring post matches up with my run through on beta from Sunday, just incase I need to make changes to my guides. I woke up, checked the forum and couldn’t see anything so I was probably half expecting not to see anything at reset today either, embarrassing how long I spent checking though before making a post

I was kinda expecting an official weekly event post by now. How odd…

Anyways, can’t say I’m very happy about the prospects of having 10/12 weapons maxed for the next KP Level. It would require both fully upgrading the Give All Allies life Doom Weapon that Sirrian and co. said they were looking into buffing years ago and never did AND upgrading the $5 paid weapon.

I guess I can wait till the end of October for that weekend event, but then that’s still 11/12. I’d still have to upgrade a useless doom weapon OR pay $5 for that other weapon…

The only upside is that it doesn’t seem like Karakoth is getting another event any time soon.

Thanks for cross-sharing from the blog. Looking into why it didn’t automatically share itself this week

Hey Gems of War! What part of epic ingots helps me max a Doom Weapon or acquire a $5 weapon?

Good news, the rework for shop offers is already several months overdue, so we might eventually get an update on why it still can’t be rolled out. Meanwhile, keep enjoying almost getting offered something useful over and over again. It helps to pretend those ingots are bricks you are supposed to throw at one particular office building in Australia.