Ways to make Gems of War more about fun, less about making money

Now that the title of the thread is one that no one on the Infinity Plus 2 staff will ever be tempted to click on. (And if one does comment it’s due to one of their informants sending then a DM…be real.

Who wants to bet monopoly money on how long it will take the devs to update the “game guide” to include Lycanthropy post 5.4 release? So far a week hasn’t been enough time.

All status effects and immunity Traits

Here are the status effects that can be applied to enemy or ally Troops and the corresponding Traits which prevent them. This article does not include Spells such as "Charmed" which may apply an ef...

I bring this up because a fawrmily member asked if Lycanthropy has a chance to self cleanse. Of which I have no idea. And just recently learned, as of a month ago. Poison was/is the only negative status effect that can’t/couldn’t be self-cleansed.

I think it might. Seems I saw something (maybe in the patch notes?) that said it has a chance to turn a troop “until it clears”, which lead me to believe it could clear by itself. Of course, I could also have imagined the whole thing. 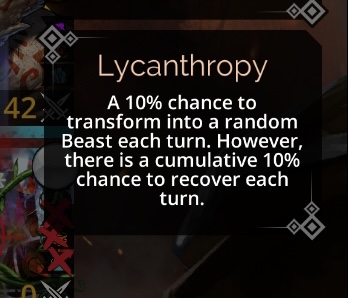