A large part of the initial appeal of this game was that you didn’t have to be dumping money in hand over fist to have a sense of progress. Ironically enough, that’s what encouraged me to put money into the game.

Now, as an endgamer, it’s cool to have so much more to unlock, except there seems to be no reasonable way to do so. Thousands of hours, or thousands of dollars? Pick your poison. :\

We’ve found an issue where VIP Points are calculating incorrectly.

Because Apple no longer has our Starter Packs or the 25$ Gem pack active (you’ll notice they’re currently disabled in the game), players are not being credited correctly with VIP Points for those items they previously purchased. This will resolve most likely tomorrow when they’re active again!

Figures, that the one that isn’t working is the one I bought. Small wonder mine is on the fritz. I’ll wait until at least tomorrow before spending.

Are we going to find out when that gem sale is…?

You misunderstood. I meant I will probably pay to get to vip 5 rather quickly, but then it will be a while before I spend more.

Update based on new information:

It likely has to do with the $25 purchase option being no longer available.

It likely has to do with the $25 purchase option being no longer available.

Sirrian’s said as much. Next day or two, Apple will fix it. Hopefully. I am 25 off VIP chests lol.

That’s right… the good thing is that because we have a record of everybody’s purchases going back to day 1, we can just run the VIP Point Creation process again… even if you spent today, it will just start from scratch and add it all up again.

I should mention I purchased the $25 through Steam on PC.

Bump. Has this been figured out? Has Apple responded yet? Are the calculations finalized?

I think the VIP points calculation is going wrong for Steam as well as apple. I know I’ve spent 35 dollars through Steam on Gems of War (which you can track under “Steam badges” for the game) which should get me 105 VIP points (5 points for each dollar spent IIRC). This would mean I’d be halfway to VIP level 3 (1 point for level 1, 50 points for level 2, which leaves 54 points of progress towards level 3 remaining. But although I am level 2, I have 0/100 progress towards level 3 according to VIP progress bar in the game… 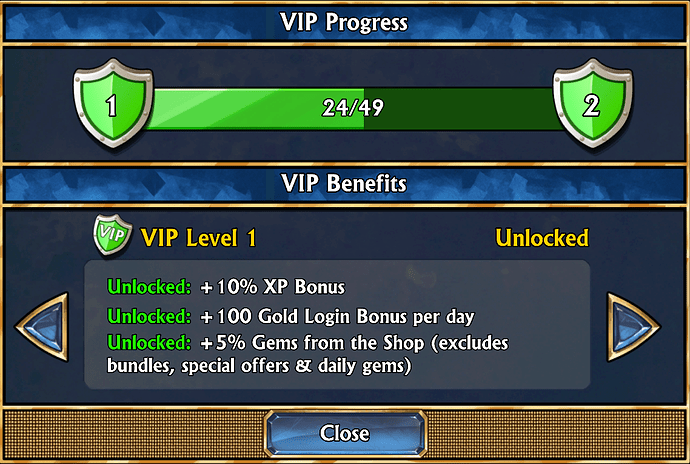 Quick update on timing, the VIP point recalculation will happen at event changeover, 3pm GMT (about 9 hours after this post)

When you next login to start play after that time, it should auto-update for you. 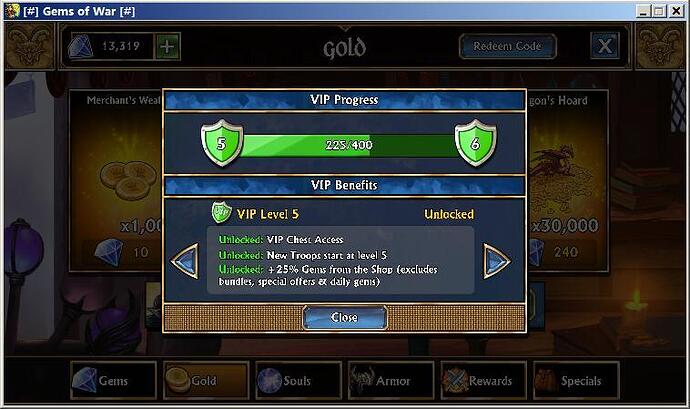 Mine is working correctly now.
I’ll jump in and check yours and see if I can spot what might be wrong

The problem is with calculations involving the $25 bundle. It’s price changed to $20, so it’s missing that $5 or 25 points. I believe we’ve got that sorted on iOS/Android, but it looks like it’s still causing an issue on Steam.

I’ll get Andrew, our tech lead, onto that tomorrow morning when he gets in to the office, and you should see it correct itself some time within the next 24 hours

Thank you so much for quick reply!

Take your time and thank you again for this 1.0.8 update!