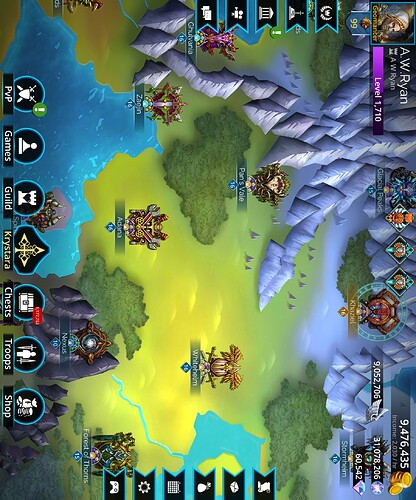 What you were expecting to happen, and what actually happened:
Using my Fold 4 in tablet mode vertically shouldn’t force a rotation of Gems of War.

How often does this happen? When did it begin happening?
I’ve had the device a week now. According to other tablet users it’s been a consistent issue.

@Jeto this thread was created 2 weeks ago and all the other reports around this one were addressed already.

Any Updates or should I submit a ticket?

I had a reply saved and apparently never pressed the submit!

Had followed this up with the team when this thread initially had appeared, as the game is intended to be played in landscape, it will force this rotation so it looks the best possible.
But I have passed this onto the team to consider including an option to play in either landscape or portrait mode in the graphic settings for mobile!

But I have passed this onto the team to consider including an option to play in either landscape or portrait mode in the graphic settings for mobile!

My Chromebook can become a tablet and it doesn’t force a perspective change when I use it as such. It’s using the GoW version from the play store.
So yes it’s very odd now to play on a tablet phone hybrid (as to a tablet PC hybrid) and have to rotate my device to play GoW. It’s very awkward. Almost like holding a newspaper horizontally instead of vertically to read it.
At this time it probably only effects a minority of players. But as the technology costs lesson over time the audience will grow.