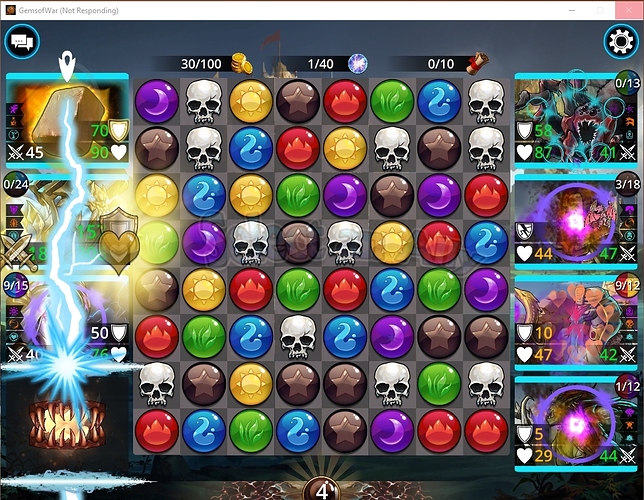 What you were expecting to happen, and what actually happened:
I tried to use Vash to devour my last troop, and the game freezes. Not the first time, more like the 3rd or 4th. Last time it happened, I was fighting an L&D team in PVP. I had just used Irongut to swallow a bunch of Orbweaver spider summons, and was trying to devour Irongut. L&D was the only opposing troop at that time.
This time, you can see in the image that I wasn’t fighting L&D, and it wasn’t Irongut I was trying to swallow, but some random that Vash had just summoned._

How often does this happen? When did it begin happening?
I’ve been PVPing for hours. Not sure when it began. More than a week ago?

Steps to make it happen again
Play Vash in PVP a lot. It doesn’t happen all the time - this is the first time today, and I have made it to position ~50 on leaderboards. 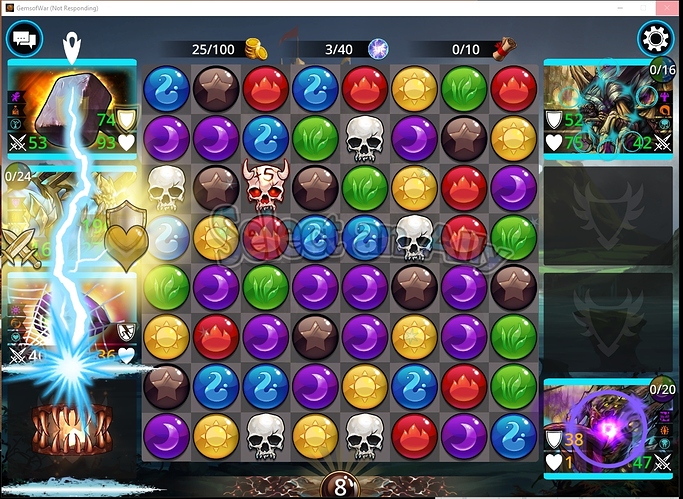 Possibly enemy summon-related, when damage is dealt to the enemy Orbweaver hero? Although I had thought similar reports cropped up at his release and were considered/fixed.

Bears similarities to this thread, although that was with a different mechanic (Summon upon Enemy death):

Platform, device version and operating system: iOS, 12.3.1 Screenshot or image: [image] What you were expecting to happen, and what actually happened: Playing with Vash against a Weaver team. Devour ally triggered Webspinner summon, game froze. In casual PvP. Found a 2nd Weaver team to try and replicate, same issue twice in a row How often does this happen? When did it begin happening? Twice so far, 2 for 2 tries. The 2nd time, a battlecrasher Sharkey joined in, I don’t remember if Sharke…

Actually, yeah, your second post looks exactly like the old issue in that thread (freezing upon an A. Weaver summon triggered by a Vash devour).

Also, Devs will often ask for your Talent loadout (I see you’re using Plaguelord) as part of the complete team info to help try to pinpoint the issue, so perhaps include that and enemy teams as well!

First enemy team looks like it would have originally been Webspinner, Doomed Club (Orbweaver), Apophisis, Fist of Zorn?

I think based on the fix to Retreat, it’s obvious Vash should be removed from the game, or you shouldn’t be allowed to cast Vash on your turn. Games just lock up when things happen, there’s nothing devs can do about it.

Why remove him simply because he is broken?
If that was the answer to anything that ever got broken, we would have no more game. 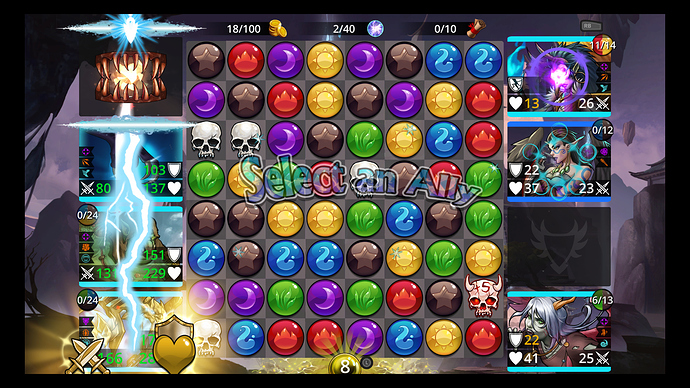 Probably the same issue, different part of the game (factions), but I’m on Xbox One.

(Game froze, had to close the game manually)

I think all of you had an enemy troop ‘summon on enemy death’ trait activate, there’s a newly summoned giant spider in the first screenshot, webspinner in the second and bladewing in the third… probably the cause of the lockup

We think we have figured out what the issue is. We are working on a fix now.

That quote doesn’t really help if its been 3 months and the issue is still ongoing lol.

Just a fact that may provide perspective to the OP with regards to devs’ priorities/programming skills, and s/he may adjust expectations accordingly.

I am simply trying to provide more information on the bug.
It’s not Weaver related. There was no Arachnean Weaver on the board in my first image. It looks like there is an enemy who may have been an orbweaver there – but not in the second image.
There is no character on the board in my second image, only the Weaver.
And different still in that third image shown in the reply above, I don’t see any character OR Weaver in that opposing team… (Maybe there was a summoner type on the player side there?)

So the bug is either on Vash’s end, or tied to something else that the other teams could have had in common. The more information the devs can gather, the faster they can figure out where this bug is, so they can get it ironed out. The fact that it’s been so long since they said they were working on it only means they haven’t enough information yet.

As highlighted by @Avathar, the common denominator seems to be the enemy troop spawn upon Vash devour

I have the exact same freeze screenshot as @TheIdleOne, and everything went down as it did to him

Apparently not upon every enemy spawn caused by Vash damage though. I just killed someones player card (and another troop in the same killshot) and a hellspawn appeared.
No lockups.

Was anything else left alive? I could be wrong but I think in the other documented freeze instances, the Vash damage would have ended the match, but-for the beyond the grave summon

There were only 2 cards left, and they both died from Vash damage, so it would have ended the match. Then there was a hellspawn in slot #1, safely, with no lockups.

Maybe there is some difference interacting with hero Talents, versus troop Traits and class Traits. For Hero, the orbweaver spider spawn comes from the class 3rd trait, but a Hellspawn summon comes from chaos talent tree. Obviously the troops like Weaver, keeper of souls, Kerberos etc summon via Trait. It’s been said by others in the past that the Talents are somehow coded differently than the legacy Traits. Maybe that is why hellspawn sneaks through?

Edit to ping @Kafka and @Saltypatra who had eyes on this issue in the initial thread at release.