Is there a chance to catch the second card with level19 if l don’t match the conditions of that according to the my VIP level yet?

I did not notice that the second cards are on level19 and l spent all of my shards to get the second one but l got a lot of cards what l already had instead.

If you’re asking if it’s possible to get extra copies of legendary faction troops from portals: yes it it.
And also, VIP lvl doesn’t matter at all here…

If you’re asking about something else: I don’t know. Try to write down your question in other words…

You just need to spend more chaos shards. To get all faction troops to Mythic level, you need about 7500 chaos shards in average.

But as I know, you can get cards only according to your VIP level. If this is the case, l just waste my shards for spending in underworld if l can not get the card what l want.

But as I know, you can get cards only according to your VIP level.

Excuse me, but who did tell you or where did you read this sort of nonsense?
The only way VIP affects cards is that with VIP5 and VIP8 and VIP11 new cards you get are already leveled to level 5, level 10 or level 15, respectively, instead of being level 1 (namely, it saves you some amount of souls).
Everything else - card drop rates, traits and whatnot - are the same for all players across the board.

The only thing that might be weird for new players are the VIP chests. Those will only be available to you when you reach a certain VIP level. I can’t remember which level. However the cards that are available in the VIP chests are pullable by anyone as long as they are opening guild, glory, or gem chests. 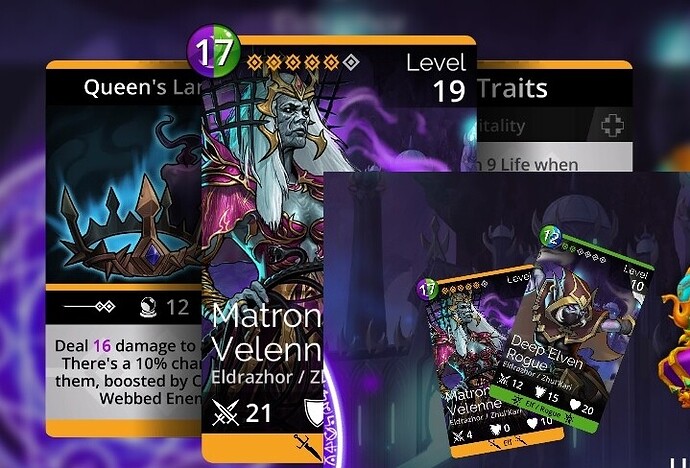 eldrhor2719×488 108 KB
I am talking about this. Two different valued card at the same place. I am asking if l can get that MVelenne level 19VIP if l am only level10 VIP. l already got the first card, Deep ElvenRouge at levelVIP. Why are there 2 different valued cards in the underworld?
Denthegod May 9, 2021, 4:29pm 8

Look in your inventory - what does your Matron and Elven Roge look like?

Every delve portal shows rare and legendary as possible drops. I don’t recall (actually, haven’t paid attention) how it looks for fresh delves, but, once you own the cards, the game must be pulling level/traits to display from your inventory - as you see, mine (apart from rarity indicators) are the same in both places 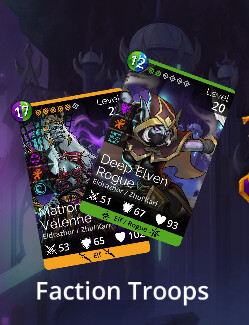 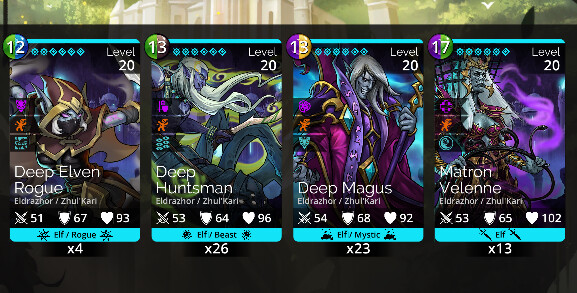 Still, that visual display has no effect whatsoever on actual drops. Use enough chaos shards and you’ll get Matron eventually. For comparison, longest I’ve gone was little over 3000 shards until first legendary dropped.

When you open Underworld chests with Chaos shards, you have a chance to get copies of four different faction troops that are unique to each underworld kingdom. VIP level does not affect which card you get or the drop rate. When you obtain your cards, they all start out at the same Level no matter the rarity (ie blue, purple, gold, teal). This depends on VIP level. At VIP 0 they start out at Level 1 and you can spend souls to increase the level. The highest starting level your cards can have, even at VIP 20, is level 15. You can spend souls to increase card level. The highest level depends on the rarity (ie blue, purple, gold, teal)
When you keep opening chests to get enough copies of cards, you can ascend all of them to mythic (teal), and level all of them to 20.
Hope that clarifies?

Thank you very much for these. It is now OK.