What you were expecting to happen, and what actually happened:
The hero is frozen, I use Tears of the Sisters (upgraded to +10, so it has Curing: Cleanse myself), to cleanse hero and get extra turn, but it skip the turn and hero cleanse only after the turn is complete

How often does this happen? When did it begin happening?
Every battle when hero is frozen. Use Tears of the Sisters

Not sure if is a bug or just regular mechanics but,
if is working as intended like this, upgrading to +10 this weapon is completely useless
Should be trigger Cleanse before the turn is finished ?

Any words about this ?

Stupid programming in my opinion since it could be done the other way around, but hey, it’s Gems of War what we are talkin about. Expect the unexpected!

Besides Tears of Sisters can just be upgraded to +9

Doesn’t prevent the niche case, it would then happen for weapons where the spell cleanses and the upgrade provides an extra turn (there currently aren’t any).

I wouldn’t really count it as bug, just a quirk in the game mechanics that might not have been taken into account when designing the weapon. I guess a player friendly solution that glosses over the niche case would be to make the spell cleanse instead of granting an extra turn, the final upgrade grant an extra turn instead of cleansing. That would allow the extra turn to work even when frozen, with everything else still behaving the same way.

Oh, Celestial Flask do the same, and if I am correct was a temporal exclusive from Fountain of Stars campaign 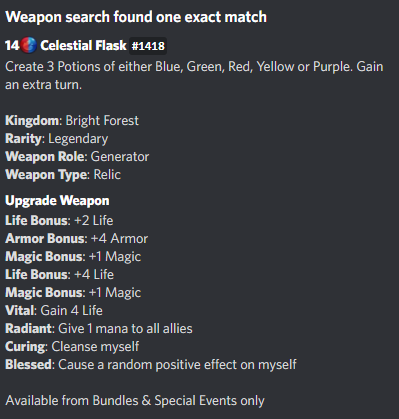 Affixes and spell orders are notoriously confusing and kind of trick you into believing something will happen (eg cleanse and keep extra turn) when in actuality that’s not what will happen. But of course you won’t know this until you max and use it. This is why using scrolls on doom and cursebreaker weaponry should be carefully done, as we have previously realised with eg doomed blade (problematic affix now amended). With all the current verve for status effects from eg gargoyles, voice of orpheus has found himself back on the teamsheet lol.

yep, doomed weapons affixes worked before spell and ruined skull alignments, that’s why we counted it as a bug, but still good hint @Helvellyn.
now spells and affixes from celestial flask and tears of the sisters work the other way around.
consistency and devs? not an ideal pair i would say

Not really. The order is consistent in most cases which is spell → weapon affixes → board resolution. Doomed blade ruined alignment because affix triggers before board resolution

You can easily see affixes such as scatter damage, entangle, mana drain,…. resolves after aoe damage and skull conversion

The order is consistent in most cases

Why isn’t it consistent in all cases? (same goes for spell order with troops) And how do we know the order of application in advance? This is one reason why buying affixes is problematic…its irreversible and potentially a massive waste of scrolls. I don’t think sketchy consistency is in any way adequate.

Which part do you not understand?

The order is as I mentioned above. I said most because I myself haven’t seen a case where it is not consistent, but someone else might have

Nevermind, I think I interpreted the meaning of it wrong. I’m also researching old discussions of Doomed Blade and it seems there were some complaints about its tempering affixes (I don’t have any Doomed weapons myself, so I can’t actually scout these yet), namely that one of the affixes disrupted some setups that would have yielded an Extra Turn after spellcast?

Yes that affix was watery which creates a random blue gem

What happened was you had a 4 match red-skull alignment. You cast doomed blade. It did aoe and converted red to skull. Then watery spawned a blue gem which disrupted the alignment. Then the board resolved. You ended up not getting the extra turn as expected.

This isn’t a bug at all.
Frozen troops do not get an extra turn and that goes also for weapons/Hero.
This means NO extra turn when matching 4 or more gems or skulls, NO extra turn if it says so on card.
Has always been like that.

Yes, it is technically not a bug. But as the weapon also has Curing upgrade (Cleanse), it is easy to believe you are going to keep your turn even if you were frozen.

Edit: Affix instead of upgrade. Sorry for my bad english

and the extra turn in the upgrade?

Do we even have existing weapons with Extra Turn as an upgrade effect? That would seem INCREDIBLY broken. Most spells generating Extra Turns are intentionally weaker than comparable spells.

If by “upgrade” you mean affix, there are 4 weapons: Rope Dart, Norbert’s Turnip, Dagger of Zaejin, and Javelin of Suncrest with an extra turn affix.

This isn’t a bug at all.
Frozen troops do not get an extra turn and that goes also for weapons/Hero.
This means NO extra turn when matching 4 or more gems or skulls, NO extra turn if it says so on card.
Has always been like that.

Wrong. If your troop has a trait, that cures when matching four+ gems, it will take effect before, remove the freezing and let you have your extra turn.

It is really a matter of what happens first. A similar case would be units that inflict hunters mark when dealing damage, or that one that poisons you by damaging, then deals triple damage because you are poisoned.
Sometimes it feels like you need a spreadsheet to remember, in which order things will happen.

there is this (which i dont have) 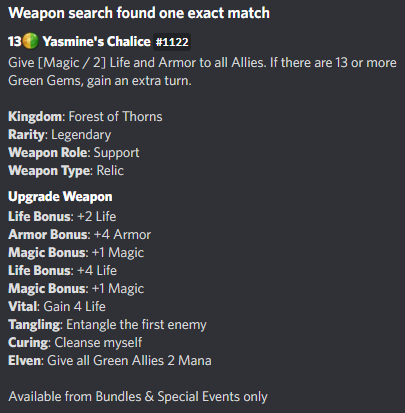