Didn’t the developers recently talk of possibly adding more kingdoms to the game? If that actually happens, then those kingdoms will have their own associated delve. That should be enough to push the max renown above 85k and gain that 2nd bonus magic.

Maybe they could use the already existing Vault and Primal kingdoms and just add them to the map. I mean they already have associated troops so the devs don’t have to completely start from scratch. Plus it would give us an opportunity to gain a gnome and an elemental class for the hero.

Is it only me that can see the world in the skies coming?

Maybe they could use the already existing Vault and Primal kingdoms and just add them to the map.

Apocalypse & Guardians would be nice too.

The topic side-track of stat boosts is noteworthy, but what’s funny is stats do nothing for the proposed Ironhawk speed team. I did a few tests and although I got more Gnomes, the overall rewards didn’t feel worth taking time away from speed farming E7-9.

The +magic bonus is given every 44k renown, so the second one would be at 88k, right? If there’s only 34 factions planned (one per kingdom) they would top up at 34x2.5k = 85k renown, so unless I made a mistake in my calculations somewhere there’s no additional help coming from delves

Didn’t the developers recently talk of possibly adding more kingdoms to the game?

That they did, on stream a few weeks ago.

For Gems of War, they brought up:

The situation is a bit murky around the new kingdoms currently, but I think the 505 acquisition of I+2 is enabling the devs to go forward with some wanted new localizations that they could not do previously, perhaps because of the financial costs of doing so independently. New localizations means new kingdoms. That and on the stream there was also discussion regarding providing the remaining missing hero(ine) racial classes, which would require new kingdoms to be released unless an unlikely rework of existing kingdoms were to happen.

Maybe they could use the already existing Vault and Primal kingdoms and just add them to the map.

They are much more likely to be faction-like in some way than kingdoms. Troops for kingdoms have to generally follow a rarity distribution scheme, which the one-off organizations do not follow (Primal, Apocalypse, etc.) Devs have commented about this in the past.

Although, The Vault might be a real possibility for a kingdom with the gnomes being common and Cedric as legendary. There are even pets present in the game files (which have been there a very, very, very long time) that could signal a kingdom, such as kingdom and racial pets (Not-so-Golden-Goose + Gnorman). There’s an awful lot of smoke signals pointing in this direction.

Trying out some troops i managed to get the magic up to 69 using your video without breaking the bonuses!

Trying out some troops i managed to get the magic up to 69 using your video without breaking the bonuses!

You asked why I hid the team I posted on here. I respectfully replied.
You then created your own team. Posted about it. And then hid it. 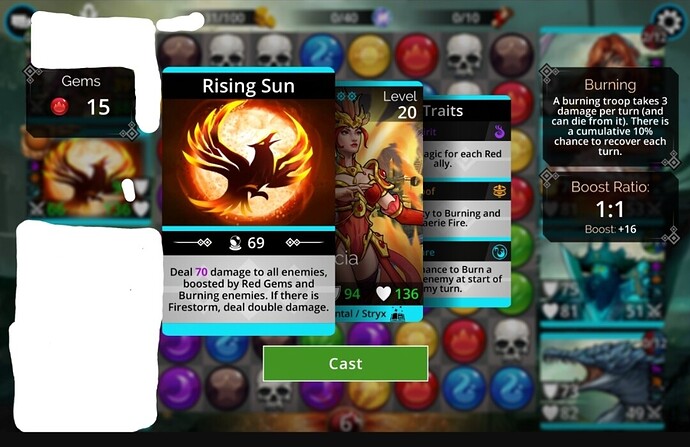 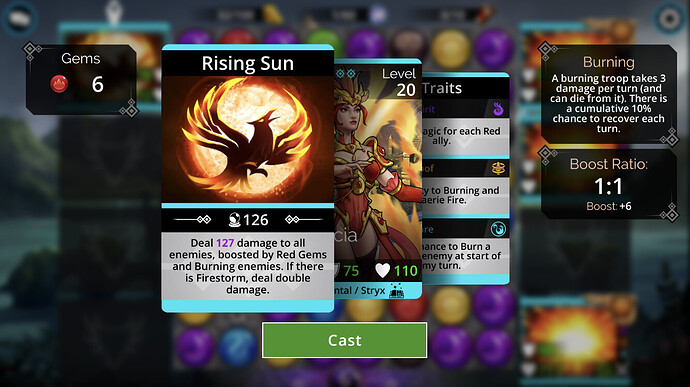 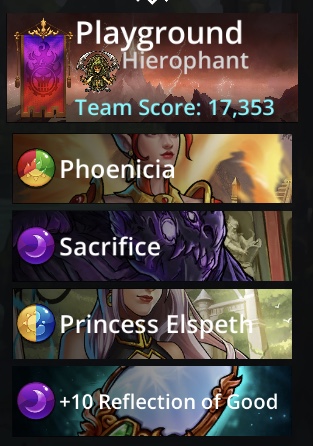 I did it out of respect of your team 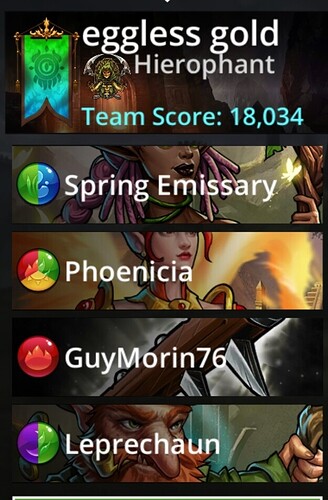 I did it out of respect of your team

Ahhh I see your intent now. But fear not. That’s your own build and not what I used.

An unedited 5 spot in action for proof. Instead of a gif?

You scared to show it

You scared to show it

Since you sent me a DM explaining you were high last night. I don’t mind reminding you. But it’ll be the last time that I do.

Hey ryan? Why r you hiding your captain?

Others can divulge what that team is. Since I didn’t make the team I can’t share it here.

I made the gif because it was requested. Not to give away a team I didn’t make.

EDIT – OMG, MY FIRST TREASURE GNOME, A SOUL GNOME, AFTER PLAYING FOR NEARLY AN HOUR NOW… wtf is going on. I’m doing no less than 6 battles a minute. I’ve done over 50 battles today and gotten ONE treasure gnome now. 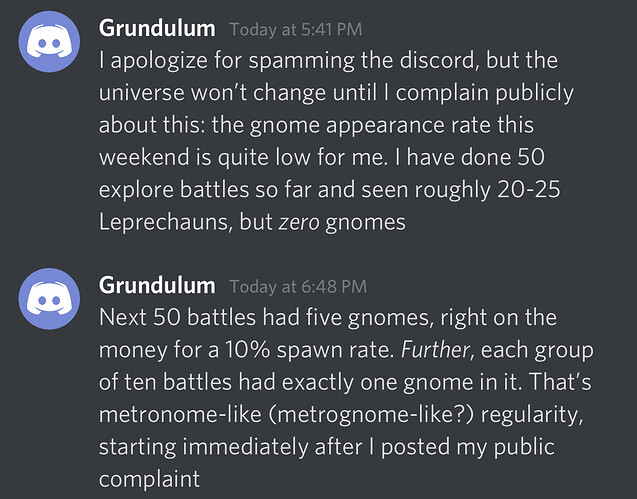 Battle Crashers will take the blame for the sins of just “normal” GoW streakiness.

… But because it’s RNG. It’s impossible to illustrate let a lone prove in any justifiable way. So the devs can seriously look into it and make the game better and fairer for those who bother to still play/support them. Or dismiss it as: (I picked that gif that’s hard to see because the current broken code is hard to see game play wise.) Perhaps it’s an issue with Unity though? …

This is stupidly ridiculous. I’m getting leprechauns sometimes back to back in battles. Okay, three times in a row just now. But I’ve seen THREE treasure gnomes this morning. Something isn’t right. Edit: sorry, five treasure gnomes, I got my first key. It’s hard to track because of the STUPID PET RESCUES BLOCKING THE GNOME TRACKER. good god…

And yet they come from somewhere that aren’t BC…