Soulforge not showing any weapons 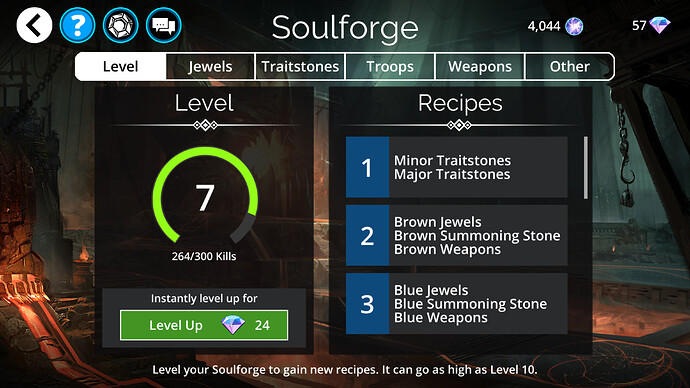 What you were expecting to happen, and what actually happened:
REPLACE THIS TEXT WITH YOUR ISSUE. e.g. This is simply what you were trying to do and what happened instead. ‘I was trying to start an Arena battle, but Gems of War loaded Broken Spire quest instead!’

How often does this happen? When did it begin happening?
Even though my soulforget is level 7, and it shows I should have several weapon colors unlocked, it always shows “Level up your soulforget to craft weapons”. I should have brown, blue, green, yellow, and purple available, but instead I have nothing.

Steps to make it happen again
soulforge has never shown any weapons.

Not a bug. Rather a forgotten text typo. Those weapon types have been removed from the soulforge a while ago (the old elemental weapons).
Right now just the last levels of the soulforge count, legendary and mythic weapons.

Then it’s a bug of a different color.

They should remove the misleading text.

I was really confused about this when I was new to the game as well. Like Beleth said the last level of the soulforge will allow you to craft weapons. Some weapons are always available but cost a lot and some rotate on weekly basis.

And yeah they should change the descriptions.

Indeed, the description stayed the same even if the coloured weapons were removed from regular soulforge.

Let me put it this way, if they don’t correct the missing text, anyone who plays is going to see this as an indication that the game is unfinished/unpolished/abandoned/whatever.

Fix this please. I’m so not trying to be a jerk about it, but it really does detract from the game experience for new folks, and you do not want that.

Have a great day!