I did some fun with GowDB stats and found out that my ranked pvp reached point where i’ve got over 90% win rate (with attacks). Kind of funny, especialy that i don’t play much ranked or dont bother do optimise my battles and sometimes even retreat if battle would take to long (ie. orbweaver, goblins).

So i’ve scanned through my collection to check how far Divinia is from being de-throned from my most used PVP troop. So here’s my top10 of all rarity troops sorted by most ranked pvp battles:

And 10 most used Legendary troops:

What are your most used troops ?

So there’s mostly a few specific teams in here.

Well, for me, these are te few i’m currently using(at least on GW weeks):

These are also few teams:

Some ancient ones:
Divinia, Glaycion, first 2 decent legendaries i’ve got some time ago
Stonehammer, first decent mythic i’ve had

But numbers are pretty low, as my total of ranked PVP is somewhat near 20k.

What does this tell you about my PvP habits? mostly, nothing useful

Stopped playing PvP for months, each one came from an era, quite surprised how Phoe never even made the list. 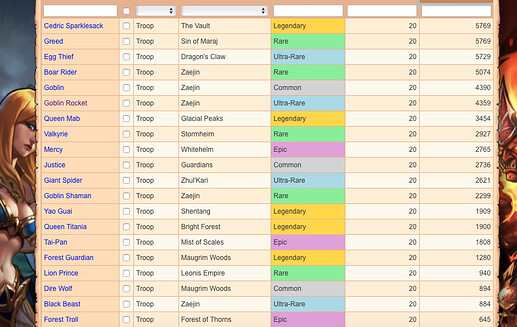 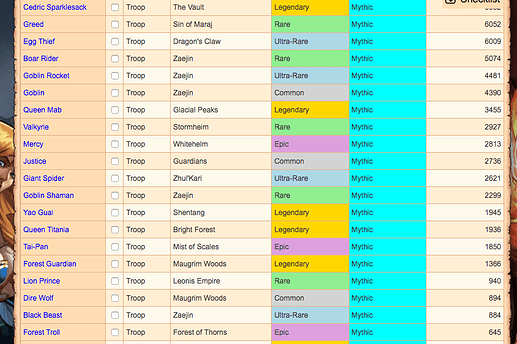 Two Goblin Rockets on Yellow and Red GW days accounted for most of their activity, until I found better teams. With the introduction of campaign and team bonus stats, Cedric Key team has been retired. I’ve never been a fan of Mythics, until I crafted Zuul. Even then, it took me close to a year before I began using him in GW and PvP. He has become my weekly “Get to PvP rank 1 and quit” team. 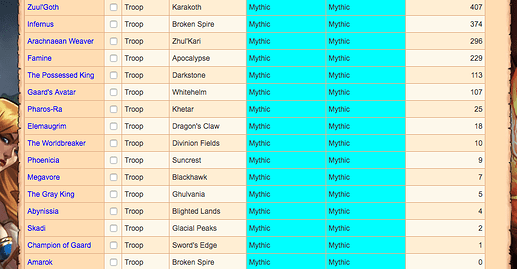 Of the XBox players linked to Gowdb.com, I am still 46th as of today with 20,840 invasions, but those were mostly when it burned while I pvp’d. Precious memories, how they linger.

The Gray King saw his first 5 battles last GW on Brown Day. It’ll take a few more years before he cracks my top 20 at that rate. I retired Infernus years ago when he started to hurt my eyes. Famine use died when his meta did. 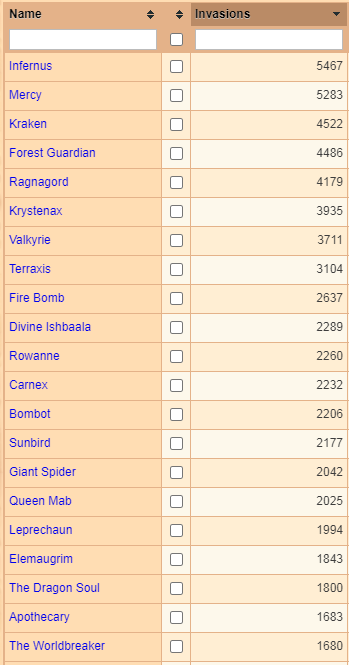 Man, barely anything on here that would be considered “meta” (in PvP) anymore. Nearly every troop I use regularly now in any mode has 1000 or less invasions.

Backstory:
Infernus/Krystenax used to be part of my quick kill combo, with a Ragnagord starter, allowing for usually 2 cycle wins often with very few turn drops. Either of them also made their way into a bunch of other teams, hence the high placement

Kraken was doubled up, back when “kraken bombing” (getting a blob match and getting 10+ trait activations on one board) was a thing (I did not use mab as the popular team did since double Kraken allowed for the same thing faster on offense with no turn drops)

Forest Guardian was used in both beast-centric teams and with the Ishballa 1-2 punch. It was my skull generator of choice long before she came out, and this was the first double converter I owned, so I used all kinds of oddball combos with it.

Ragnagord was the favored quick starter of choice back in the day. Pre-exploder nerf, it was more likely to fill itself without a storm on the table (and storms were much less likely to be present), allowing to stack damage with light generation in other slots (eg, Infernus/Krystenax)

Valk was used with Queen Mab and some other blue centric teams. My main mab team used double valk. It was extremely effective before it was decided “mana burn” needed to have an immunity trait put in (for mab, specifically).

Terraxsis was my oddball pick, often paired with Alchemist and Mercy and sometimes Krystenax or Kraken to practice long control chains. This was also one of the troops I used to break into endgame, supporting Great Maw before I could do Maw/IK/Sheggra, I was using Maw/Terraxsis/KoS, and instead of treant/alchemist/valk/banshee I would use treant/alchemist/valk/terraxsis.

Fire Bomb was used primarily in blitz teams versus stuff with much lower stats.

Ishbaala was paired with usually Infernus or Forest Guardian. Surprised it wasn’t higher, but I used this primarily for skull spamming rather than the Infernus/Ubastet thing.

Then we have this curiosity - Rowanne, Carnex and Bombot all tightly clustered. My speed t3 PvP team was, for a time, Carnex/Bombot/Rowanne/Prismatic Orb with Mechanist. While this sounds odd by today’s standards, at the time, this would trivially single-cycle most encounters even in the T3.

I actually have no idea how I got to 2177 Sunbird invasions because I generally wouldn’t seek out lower level matches, but one of my teams was Warden with Bronzelock, Sunbird, Forest Guardian, and Fire Bomb which would wipe out mid range battles in 1-2 cycles (usually firebomb - sunbird - pistol or FG - sunbird - pistol or FG).

Leprechaun is obvious, it fit in a ton of teams, even though it isn’t nearly as old as the others.

And at the bottom we have some dragons. Back before everything that mattered needed to have an empowered start, Dragon’s were fairly effective.

Apothecary stick out like a sore thumb there between the others, because she is actually used on my current rotation of troops as well as back in the day. She has the same colors as Queen Beetrix so it is difficult to justify using her as a team slot to cover cleanse, but sometimes you don’t want to just spam the same option over and over (and sometimes you might want to actually counter stun I guess).

I’m sure these numbers would be much different if they included all combats. PvP is such a tiny sliver of the game nowadays, its looking like even if I played way more than I do now it would take years for my current PvP rotation to be at the top of my list here.

I’m sure these numbers would be much different if they included all combats. PvP is such a tiny sliver of the game nowadays, its looking like even if I played way more than I do now it would take years for my current PvP rotation to be at the top of my list here.

That’s where I’m at as well. For instance Yao and co would be preposterously high for me because that’s been all of my pet rescues ever, MarajiQueen + Rowanne for dailies that surely outnumber my PVPs in the last year+ as well as a ton of <lvl100 delves, etc.

Cedric/Greed would be even higher for me.

Skeleton Key and Egg Thief for dailies/Dungeons/Pet Rescues, and Bronzelock/Zuul for Explores.

I have yet to experience the joy of Peasant in PvP, @Brakkish. I have much to learn, it would seem.

I don’t even play to tier 1 nowadays unless forced by the campaign, but PvP was my favourite game mode back in the day… I started by ‘punching upwards’ with a Dragon team and then a Tesla team back when Ragnagord/Famine was scary, played a lot during the divine meta heydays, did a fair amount of casual PvP to finish leveling classes and used both Greed an Obsidius/Zuul teams quite a bit, pretty mixed list 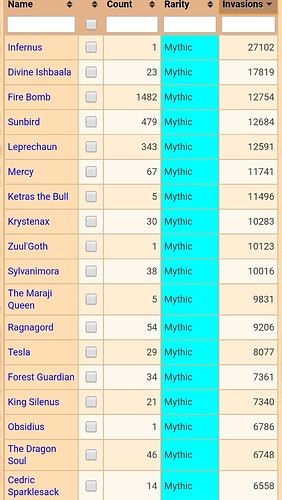 Back when I had 6 active accounts, I used to think “I bet I could get 8 Pet Hunts done in an hour”. What I didn’t realize, what I couldn’t have know back then, was that the Kingdom progression was changed. New accounts could no longer head straight for Zaejin, and unlock the Thief class and Skeleton Key.

Then, as those new accounts, er, “players” hunt pets, er, “rescue” them, their teams will be saved for the next pet rescue. So, by the time these “players” get Skeleton keys, if a pet “rescue” is active, they will have to change teams to get the preferred team up and running.

That, plus the fatigue of running 8 accounts, well, only a mad man would think to do that in the first place. I never did get 8 hunts done in an hour. And now, I never will. 5 accounts retired; 3 pending suitable replacements.