So I crafted a weapon to counter dawnbringer

Hi all.
I was sick of dawnbringer so I thought I’d craft a weapon. 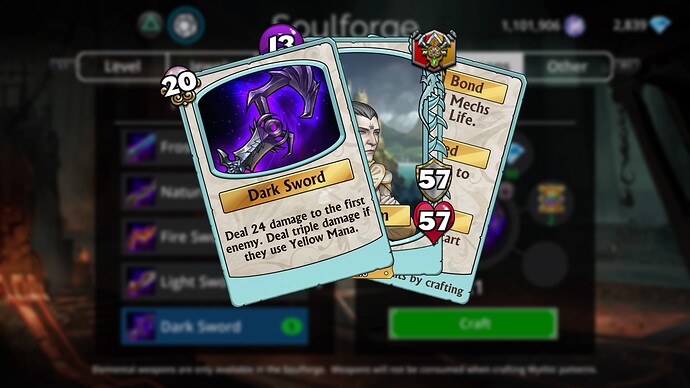 Lol sorry that sucks. Funny cause I did the same thing with another weapon. Got to arena and all I could think about was 100,000 souls.

Ive been running defence teams using each on their respective days (since thurs) … Ive got 1 win so far (out of 3 or 4). Im determined to make these f***ers work! Unfortunately, if ones not in the top bracket, only one person in each team uses a mono-colour.

The stat line on crafted weapons are displayed with all of your class and kingdom bonuses. These bonuses do not apply in Arena.

But my point is that it should really show both the base value and stat boosts too so that you can make a decision based on the use in arena. Also very frustrating that you can’t scout in arena too.

The point is, Dawnbringer should NOT be in the Arena!!!

Dawnbringer just makes for another reason not to do arena

I’m considering crafting it only for arena, however, I’m half afraid I will and then they take it out. I have no need for it otherwise. Personally I have not lost an arena run since I’ve been playing, even with DB in. It’s not tough to beat really. I simply want it to make arena runs faster.

I played through the arena twice today, encountered only a single Dawnbringer out of 17 matches there, had no problem dealing with it with Imperial Jewel. I was lucky though to pull Cockatrice in that specific run. It drains the hero mana and even if it misfires with brown spawning, Dawnbringer has no use for brown. I did lose a run yesterday though my team was really very bad and still, it was not DB but runic blade iirc. IDK what is going on, maybe those players who crafted it early on had some fun and did not come back and are being replaced with other players who don’t have it. In either case, seems like DB pandemic is eased down a bit for the time being.