The attempt to fix PC seems to have caused mobile to now loop way more than before. Just saw the normal console Justice/Mab infinite loop on mobile a number of times. Our only advantage is the AI gets distracted by skulls, not that it changes the monotony. Hopefully a more permanent fix that works on both platforms is found soon.

The other big issue when you start adding ‘constraints’ to randomness, even in limited cases, is that it changes the players views on fair play. Last week if the AI got 3 match-4s in a cascade you would just chalk it up to random is random. This week instead it makes you wonder “was that random, or is there another tweak?”. And it doesn’t matter how much or how stridently people say it is just random, the doubt is there reinforced by the notion that not all random IS random, since they’ve already tweaked it in one way.

It doesn’t take long to go from a small doubt to “why bother playing when it comes down to the AI deciding if I win or lose?”

Exhibit A - The A.I hates me especally in GW since the update

wait wait wait. are you telling me console folk is having issue and pc folk got the beating?

bug is one thing, but ultimately fun is all this is about. if console is not having fun, shouldn’t the fix go to console? why pc get its fun stripped away?

is this how this game now? if one side is not having fun, no one can?

The only reason you got the fix first is because it’s easier to do it on pc, they will adjust it and when they will be happy they will push the fix for console. It’s not hard to understand

The nerf on gem creators is so bad, they are pretty much unplayable now.
Worst of all… enemies keep looping like they always did… it’s less good for them to, but nowhere as bad as for you. I understand Sirrian says this is not the case, yet it does feel like it.

Casting on screens that are half filled with your color, doesn’t create a single 4er, and sometimes not even a 3er.

So please tune this further, so that it’s at least usable again…

I think we deployed out about 5 or 6 updates to that last week, each one incrementally improving it. Stats-wise, it looks to me very close to how the old system was… but we’ll be making a few more tweaks tomorrow I believe. That’s not really the how it works… it functions equally for both sides, I’m very certain.

I’m looking forward to the “all clear” when I can go back to playing a random spawner team (using a troop like Jarl or Elspeth) and not lose 60-70% of the time due to giving the AI a chain of 4’s/5’s/skulls while I get nothing or a 3.

Interestingly, when I face these troops in PVP, they almost always result in getting one or more extra turns for the AI, which means they’re only broken for the human players. I had an AI-controlled Gar’nok loop itself 8 times this morning. There’s nothing “fun” about sitting through that.

Are you kidding me? 20, I repeat, TWENTY, blue gems on the board, and Kraken creates only ONE 3x match! NO EXTRA TURNS AT ALL. Here, I got screenshots (I knew this would happen so I took them): 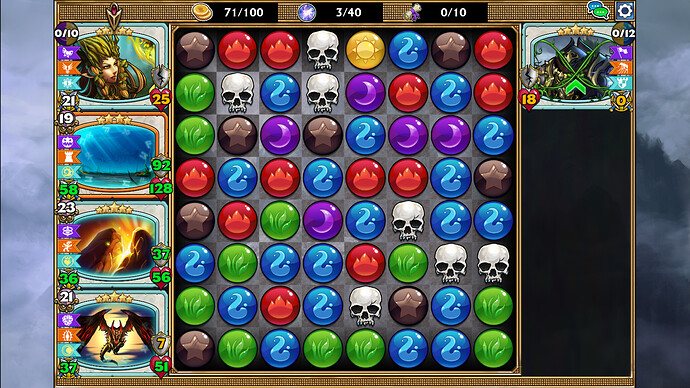 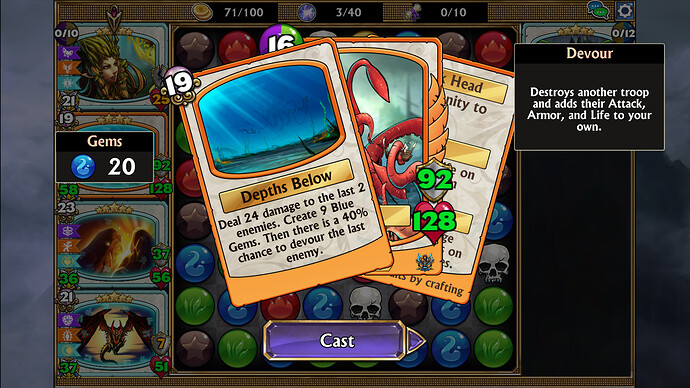 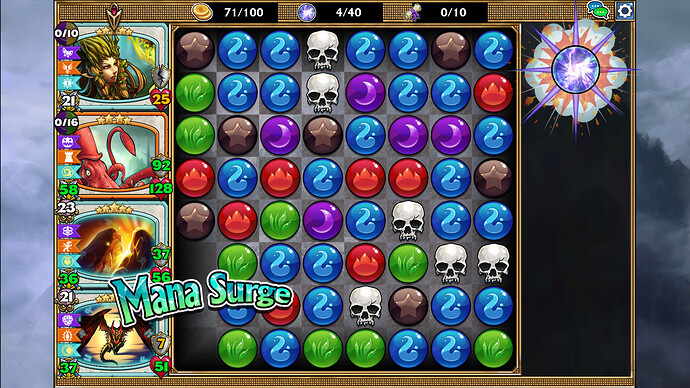 I don’t really understand why everyone is up in arms about it not being “truly random”. The devs have always been clear that they give players a little extra “luck” in order to make the game feel more fun and b/c if it’s “truly random” then players actually perceive a bias against them.

I understand the issue with the predictability of cascades changing and that throwing people off, but the issue of them manipulating luck has always been there.

I really wish they could turn on a “never lucky” mode. Then everyone would lose their mind about how “unfair” it is.

The never lucky mode will 100% be unfair, no quotes.

If there is an algorithm giving extra luck, than it needs to go as well. That’s cheating.

I really wish they could turn on a “never lucky” mode. Then everyone would lose their mind about how “unfair” it is.

Well they did exactly that a couple of days ago…

I’m just pissed off I levelled humility, now it’s unusable as it gives AI 5 matches every time I use it.

Please, Devs fix these problems: another of my PC playing guildies, wants to quit the game because of the insane cascades the AI gets. I don’t want to lose players every week like happens now.

The behaviour @Mithran documented was a bug in our gem spam adjustments. Console hasn’t been affected by the changes at all to it yet, so it will still create 15 new gems randomly on the board, and not overwrite its own colour.

Any update on this balancing?
Because post change, gem creators remain very useless, in that they fail still way more then they did before the switch to unity.

but, to update you on my “console cascades” experience:

last sunday i ended up with a gw 1v1 fight:

my Draak vs enemy Celestasia,

enemy celestasia healed for 14ish, my draak was something like 28±attack, 25± true damage - despite i was taking all extra turns i could and preventing to set any extra turns while matching, plus taking all blue/yellow off the board, mine and enemy life kept growing… the skydrop extra turn ratio was just too high

im not liking it.

I prefer to make the moves myself instead of those cascades. I definitely feel less involved now

I wish there was a playback/replay feature, to show the crazy stuff once again

Last week the AI boost was 3, and Player 1. Monday after reset, feel like AI boost was 3, and Player 3, so many useless troops, but could compete with AI mana collection and skulls. Today (Tuesday 7/18) feels like they bumped the AI again, so AI boost 5, and Player boost 3. Even more falling match 4’s skulls and cascades…had on first turn an AI Cockatrice loop so many times it filled EK and Maw and was still going when I closed the game…then got the AI down to 1 TDS, and without respawning, the 1 TDS looped and skulled until all 4 of my troops were dead. Never seen either of these before in 1000s of matches, just unnatural which offends me and takes me out of the game…so off to play Hitman again. Good luck from Agent 47.

It feels like gem creators have been nerfed even further this week… but maybe my wife and I are just both very unlucky.

Meanwhile, the cascades are alive and kicking… Combine 3 blue gems, and multiple skull attacks fall into the screen, followed by a 4er, to keep it going.

I think the game is gonna ban itself soon, for botting

I wonder if they are tweaking the mobile version at all. I have had mad unreal drops for almost 2 weeks now. Full rows of colours dropping or skulls with no Active Storm’s. Troops filling up very quickly.

I expect that from pc unity version.