What you were expecting to happen, and what actually happened?
Expected to hit the last two troops and killed the second and fourth one.
What are the steps to make it happen again?

No screen shot here, but it happened to me yesterday too.
I thought it was because the skipped one was a Summoned Troop, but I guess that’s different in your case.

Yeah, just the basic meta team.
BTW it`s not allways bugged, this time and a couple more only, idk what triggers the bug.

This happens when one or both troops are killed by the damage portion of the spell(in this case queen Mab) , then the ‘lethal’ portion is applied to the next troop that is currently poisoned.

I’ve consistently killed all four troops in explore by the damage killin the bottom two troops and lethal applying to the top two.

It is the same bug that effects Khorvash if he kill a troop the next one is stunned.

I believe this mysterious behavior can be explained as it follows: 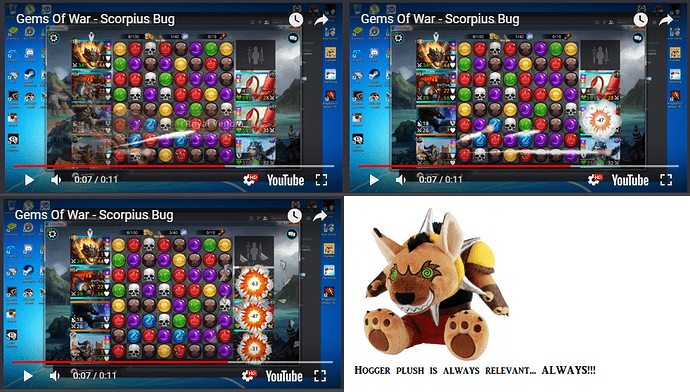 scorpbug981×558 558 KB
Maybe the devs tried to prevent Scorpius’s spell from killing more than two troops and it usually behaves in unexpected ways and you end up not being able to kill the right targets… Or the verification of killed troops considered that two poisoned troops where already killed, therefore one was spared…
2 Likes
Nimhain November 11, 2017, 4:36am #6

We heard about this bug yesterday. This is the same issue that Emperor Khorvash and Kraken both have. It’s part of the unity codebase but unfortunately it’s not an easy fix (not to say that we’re not going to try but it may take us a little longer to fix due to the potential problems that could happen).

Thanks for the heads up on that! Excellent to hear!