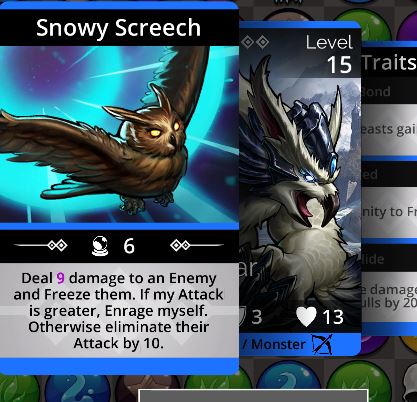 What you were expecting to happen, and what actually happened:
I was expecting the spell to eliminate 10 of enemy’s attack if its attack is equal to Snowy Owlbear’s attack, but that does not happen.

I noticed this in Arena, but the behaviour is the same outside Arena also.

How often does this happen? When did it begin happening?
I guess ever since Snowy Owlbear was introduced.

Steps to make it happen again
Use Snowy Owlbear in a battle.

If Snowy Owlbear’s attack is higher, it should always get enraged. If it isn’t higher (because it’s equal or lower), it should always eliminate 10 attack. That seems obvious. The fact it does nothing when attack is equal is pretty stupid. The ability doesn’t say “If my attack is greater, do this. If it’s lower, do this instead.” But it’s probably coded like that, and they forgot to do anything if it’s equal.

Oh hey, this bug from April still hasn’t been fixed. Source: It just happened to me, so I searched for it.

Bug reconfirmed as of this date.

Another one here with Owlbear at Arena. Still doesn’t work as expected.

Maybe we need to collect such cases - old troops with bugs. Snowy Owlbear, Haunted Guardian - what else?

What about them? (And which “phoenix” are you referring to – Sunbird? Lady Phoenicia? Quetzalma? Moon Phoenix?)

Going from memory, here’s what I know of:

You got it right.