When we previously had to deal with this freeze issue, there was a workaround (go to chat, click on someone, fight them, and retreat) that would take you back to the map. In their infinite wisdom, they removed the Fight button on the freeze. Way to go devs.

We are 2 steam players on different accounts.
It happened to us in an adventure board battle and in an explore 1 battle.
What is interesting is that (for us both) happened exactly at the first battle AFTER a couple of legends reborn battles.
Please fix.

Screenshot_20220801-1724561920×864 118 KB
Ranked pvp. After pressing continue… Has happened 3 times in different gamemodes since weekly reset. And I always restart the game after daily reset at least once

So there are reports about losing progress, rewards and sigils. What will you do to compensate us? I for one havn’t looked before and after each match whether or not I have recieved all rewards or lost progress due to your …(please insert your word here to describe the devs and the many bugs/half finished/half playable events they release again and again…).
But I do know that I will not play more before you have fixed this. 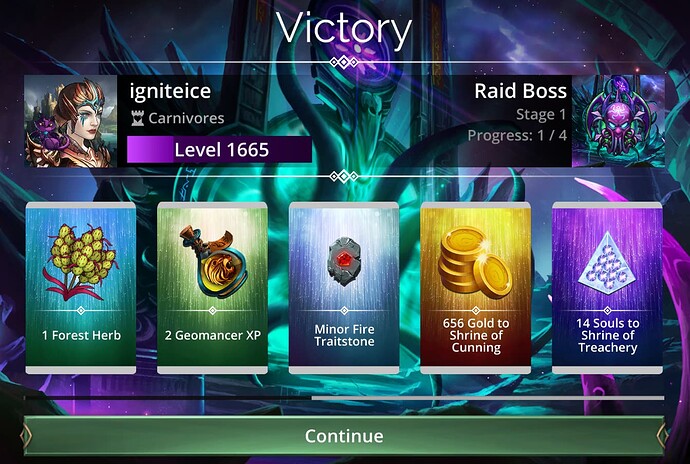 This just happened to me after my first PVP match of the day and lost the Battlecrasher that I would have gotten. It just let me collect the rewards over and over again, but would never let me out of that loop and had to restart

Can confirm that the soft lock is caused by Tier 1 being finished in the Legends Reborn event.

I was at 49/50, killed 2 green troops in Challenge. Screen became unresponsive.

Same glitch as everyone. Just had to leave and start game, again. PC.

Xbox. 7 freezes today. 2 in raid and 5 in pvp. Had to dashboard and restart the game every time

The raid, it just froze on the reward screen.

PVP it got into some sort of endless loop on the reward screen, when you click on continue and the PVP points are added to your rank it loops back around to the continue screen. This loop goes forever unless you close the game.

I got the soft lock in my second or third battle after weekly reset (was doing Dungeon for campaign task). Then got it again few battles later.

This soft locked during Raid minion battles. (Costing me a sigil that the devs won’t feel the need to redeem.) (Samsung Galaxy S21+)

What’s the point of a beta or in house testing if every time it’s released it’s going to crash the game no matter what?

Has happened on Steam, Bluestacks, and Android for us today. PvP, Legends Reborn, and Raid Boss.

This has happened to be 4x today, and I think I am losing the battles and reward. I hope not but I do believe it is causing a loss.

It ocurred to me in more than 1 game mode;
I have closed and relaunched since weekly reset;
It freezes at the screen that shows the battle rewards, with the “Continue” button. The only option is to close the game.

I think it stopped happening after I finished the forest of thorns story battles for the event. I think it happens whenever you do a battle there and goes to any other battle somewhere else.

The game had been stable (no soft or hard closes) since 6.4, but just when you think (& hoped) they figured it all out, it gets stuffed up with Legends Reborn. Disappointing af.

I created a Known Issue article for this bug and will cross-share this information into the other threads that have popped up.

This is currently sitting as a Critical issue with the team, as soon as I have a response I will be here as soon as I can.

Appreciate everyone’s patience while I run around the various threads!

Adding my five cents here.
The issue started after playing the Legends Reborn event, and changing to other mode. It is a soft lock that prevents returning to the main window.
It also ocurs in Treasure Hunt mode, i can’t return to the main screen, but replay works normally

I am playing on PS4 and my game is freezing after collecting rewards, and I’m forced to restart. Happened last night as well, in all different game modes.