[Reported] Game crashes when accepting an invite to join a new guild (PS4,)

What you were expecting to happen, and what actually happened:
Has happened twice now when inviting new members to the guild. They click on the invite mail and it causes the game to crash. They do join the guild though.

How often does this happen? When did it begin happening?
Only twice now. Since the last update, maybe before that?

Not a major bug but thought I would report it anyway. Not sure if the same thing is occurring on other platforms.

I noticed that on Xbox as well last week when joining a guild before the start of GW. I joined the guild, and then the game crashed. I was in the guild when I reopened the game. The guild had sent a second invite while I logged in, and the game crashed again when I opened it. It did not crash a third time tho, as my inbox was empty.

We were discussing the same thing happening on PC/Mobile as well. Seems to be all platforms unless Switch users are special.

Continuing the discussion from Game crashes when accepting an invite to join a new guild (PS4,):

Happened to me thrice this morning. Only the third time did I get into the guild. The two first times, I got a message telling me I couldn’t join.

Below is a screenshot of the third message. 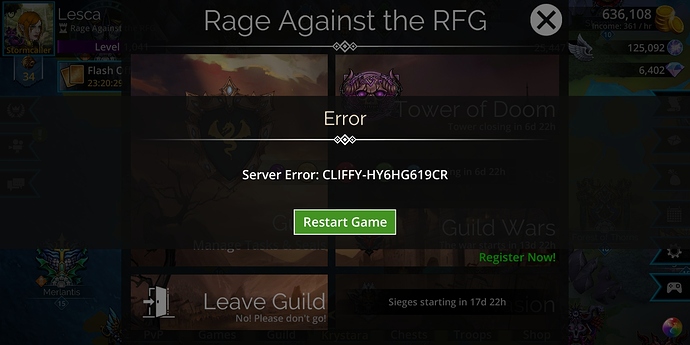