[Reported - Contact Support] Purchased Tide's Lash and got something else

Anyway the point is there could be some kind of bug where the actual Tide’s Lash is not being recognized. Was this weapon supposed to be out? Just wanted to post this just in case someone else had come across this problem. I’ve already submitted a ticket for this issue and hopefully things will workout.

This was on the PS4.

The weapon was released when Nexus came out first time.
The received weapon today might be related to Nexus packages released earlier.

Oh ok. Hopefully when these guys go back to work they can look into the issue. I honestly felt like a kid putting a quarter into a toy machine expecting something specifically to only end up getting duped.

I also purchased the Tides Lash weapon and got the Demon Lash instead. I wasn’t able to get it when it originally released. This better be addressed or I need to get my money back

Yeah, for real. I’m not sure how something like this could’ve happen.

Same happened to me on Android:((
Is support going to do something with that??

I hope so, submit a ticket if you haven’t already.

We’ve spoken to the team about this first thing this morning.

This is a side effect of a bandaid fix we put in for the empty stores until the hotfix patch goes live to fix it properly. I knew you would get the next week’s content a little early but thought it was going to display what you would receive correctly.

If you’ve had this problem and contact support we will send you the Weapon you were shown when you made your purchase.

This Help Center article covers the issue and has the direct link to contact support at the bottom:

Select 'follow' in the top right-hand corner to be notified of any updates to this issue Status The development team has a fix to be released. The Issue When purchasing Tide's Lash from the Weekly ...

We’re very sorry about this.

Opened ticket #121230 12h ago, but still not received any respond, purchased yesterday Tide’s Lash weapon twice, and two times received wrong one, Demons Leash. Looking for refund for second purchase, and for sending me Tide’s Lash weapon, thanks.

I was wondering the same if there was an update to getting the weapon we purchased in game? I only purchased once and am just waiting on the weapon. I have already initiated a ticket

This is from the GoW Support site regarding the problem. 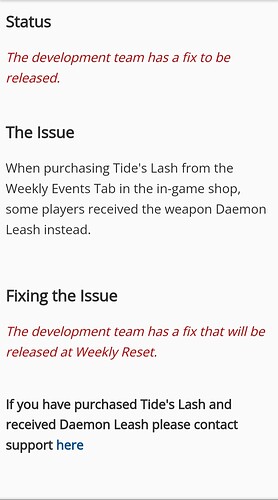 “The development team has a fix that will be released at Weekly Reset”.

Not clear on what’s meant by this… next week we’ll hear something? This info was 2 days ago.

Yesterday was the last public holiday we had after a month of many many holidays and short weeks.

We’ll be continuining to answer tickets about Tide Lash today.

@S1eepy specifically: if you’d like a refund on your 2nd purchase please contact your store’s support asap (ie. Steam, Xbox, Googleplay, App store, Playstation…) as we can’t provide refunds from here, the store that you paid handles that.

If you’re unable to get a refund from them or as an alternative to a refund we’re happy to exchange your purchase for something of equal value from the game so just let us know what you plan in your ticket and we’ll help with that when we reply.

Yesterday was the last public holiday we had after a month of many many holidays and short weeks.

Wow, Halloween must be a big thing in your neck of the woods, well I don’t blame you guys, we all need to have more time trick-o-treating, dressing up as someone else or something else while scaring folks

(I’m only kidding, making fun and taking advantage of the moment).

My problem has been resolved, thanks!

It was actually Melbourne Cup Day here. A sport related holiday.
It’s a controversial one but whether we celebrate it personally or not, it’s a bank holiday

Unfortunately Halloween isn’t big here despite what the retailers say, that would be much more fun for me though honestly haha.

We used to trick or treat before everyone got too anti-american to humour the kids, then as a teenager I used to host the funnest Halloween parties even if I say so myself