Looks like we’re in for quite a crappy selection this week!
I’ve not had much luck yet at all with the raid and am looking for some help with deck building for this event.

I have every troop apart from VOO. New ultra rare is pretty poop. Wazir seems pretty pointless as well.

I actually think the choice isn’t that bad. 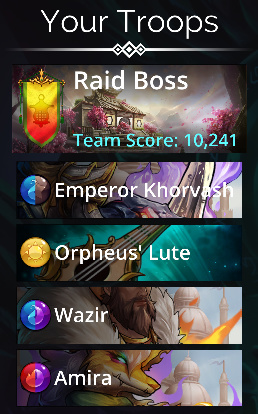 Amira and Wazir are great at killing Zuul’Goth, specially Amira thanks to her Stealthy trait protecting her from Zuul’Goth’s Spell.

I could be using Mang, but in this composition the Dust Devils would screw the strategy, on the other hand Orpheus’ Lute is doing ok enchanting the other allies and such.

In Mang compositions i think Ishbaala could work better.

Okay so I think I’ve found something that is working for now.

For me, I was using Mang, Manticore, Desert Mantis and Wazir but that team failed hard after a while and since I was able to fully trait Khorvash (and actually pulled Ishbaala), I’m thinking of changing it to Mang, Khorvash, Wazir and Ishbaala.

Desert Mantis seems like a massive liability to fuel Zuul

I used it for my first few battles but it backfired so badly.
The new team I just listed seems to be working, though at higher levels (currently 115), I need another shot to finish ZG after HC and Amira.

Another related thread here, but I think we should keep using this “Raid Boss [Leonis Empire]” one, so all suggestions will be in one place.

Might as well see what other people are going to use. I plan on using:
Khorvash/Golden Sun/Wazir/Amira

As for my team, I’m still using Mang/Godslayer combo team again. This is my review for other 2 troops choice.

Moneylender is there to raise the ceiling on gold acquistion (though haven’t needed it yet), and to generate red for Mang to use and DivineIsh to convert.

Had one hiccup so far around 125 but the others were a steamroll.

I use Mang / Wazir / EK / Ishbaala, but against 3 Monster teams I use Monster Muncher instead of EK. 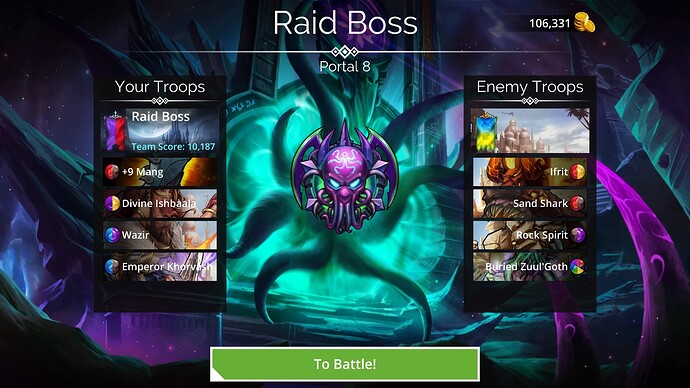 I have settled with this and assassin hero.

Thanks everyone for the tips.

Looks similar to what I’ll run come the weekend when I switch to mang. Saving the sigils for then to save the hassle of swapping hero classes back and forth.

I’m having the worst luck finding a decent team. Ishbaala seems to iffy for my play style. I only have Wazir epic and he can’t take down the boss after mang. He’s such a horrible troop I dont want to waste gems to make him Legendary. Anyone else have team compositions theyve had luck with later on? I’m at boss level 130. I have EK as well.

I don’t have any of the legandaries, but have had good success. It’s designed to not matter as much if you get hit by the dust devil.

For the first several levels, I went in with Dawnbringer/Ishbaala/Mantis/Falconer. Worked alright until it didn’t, but my goal was just to get some battles done, which it did.

I find I’m getting good progress with Mang and Ishbaala…

I used ascension orbs to get Wazir up to mythic. (Don’t have any other use for them.)