Hello to all, this is Khellendros of guild Dark Vengeance. . I have been playing GoW now for a while and have been thinking of ways to improve the interface of the game and give a Guild Leader ways of keeping better track of how members are doing without taking their word. One of the first Ideas I would love to see added to the game is a simple way of know which of your members are on, by looking at one page. I have giving just one example of this seen below. I have made the Star under level green to signify that a player is currently playing…When they log out it would go back to grey. All members in the guild would be able to see this and not have to wonder if a person is there… 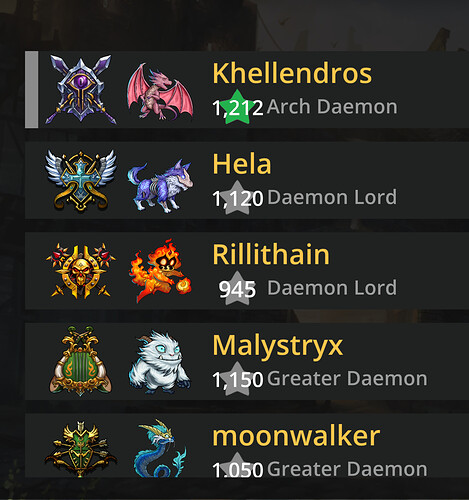 My second idea is to expand the Kingdoms Owned part of the game… I would like to see the Kingdoms Owned to be clickable and take you to the following page with will add two more items, Level and Power of each Kingdom. This will allow a leader and all other members in the guild to see which members in the guild are putting forth more effort and deserve a possible promotion or a reward which is my next topic. Below is a basic idea of what I think would work. A little art work here from Devs would add to the page. 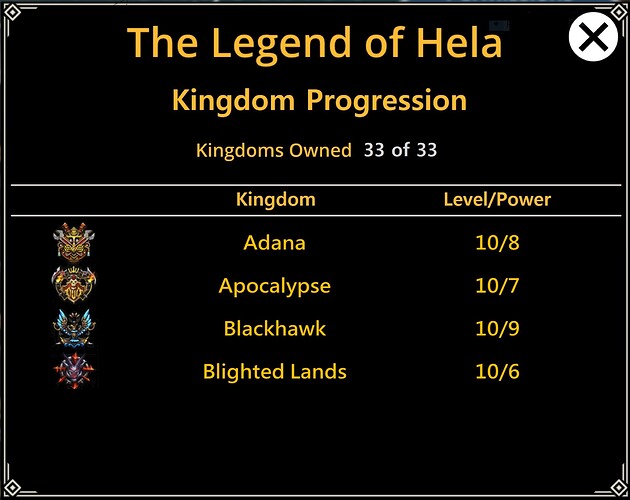 My third idea could be added to and adjusted in many ways and is a starting point for a Guild Leader to reward the guild with items each week if they are deserving. I have modified the Member Profile page, adding a Reward button. Clicking on this button will take you to a new page where a Guild Leader, and only the GL can allocate up to ten rewards each week. The GL would go to the members profile, click on reward and then click one of the numbers under one of the listed rewards. Once clicked on, the reward would show up in that members Mail and the space would be blank… 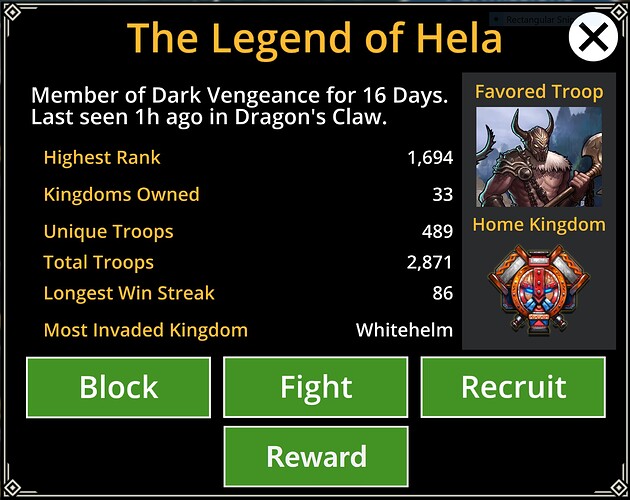 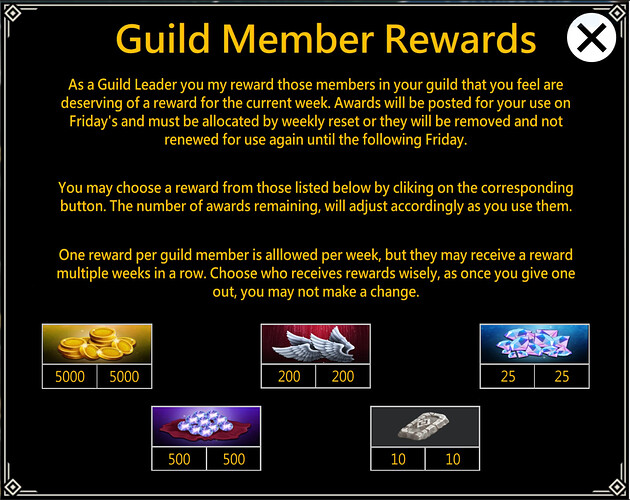 The next Idea came from Wanda-Ful of the Guild Kraken the Whip and is another easy but useful Tracking MOD and tool to use in recruiting new members. It will track the number weekly and lifetime Legendary Task completed. 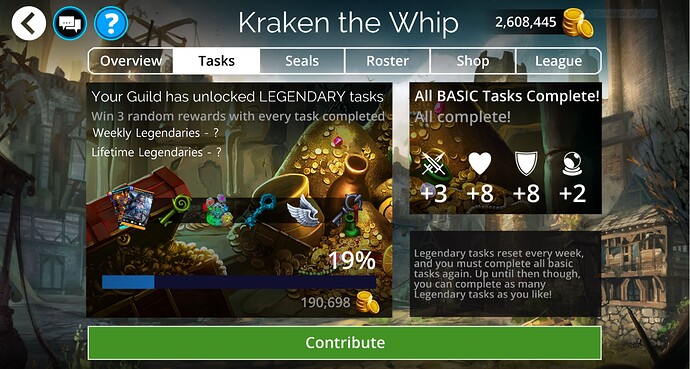 This next idea was mentioned on the community page by Courtenay and is his to claim. All I did was do up the graphic for him and posted it here with his permission so that it could be seen by all…He would like an Icon for Ingots on the Soulforge page next to the Gems Icon. This of course would show how many of each ingot you have all in one place with no scrolling needed… 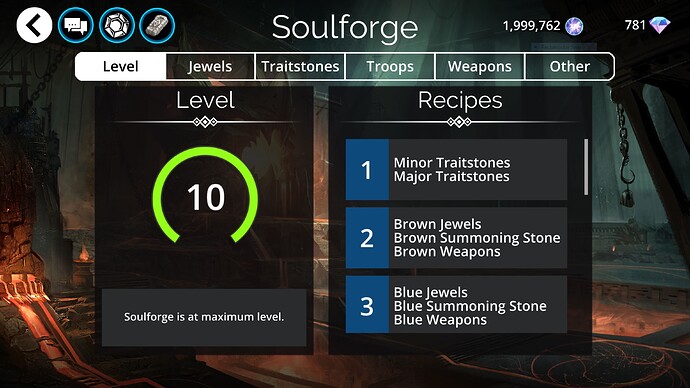 I would love to hear your input on the ideas and please do not let the Public voting keep you from doing so. If you do not like something it would be nice to hear why and ways to improve on them. I Ask that you respond maturely and do not put down others for what they may have to say. Be open minded.

I would also like a counter on the Legendary Task Screen. It is easy to lose count of LT’s that are done, and it could be used as an accurate recruiting tool. A Screen Shot shared in a chat app lets a possible guildie really see what our guilds are offering to them. Our current members can also see how well we are doing each week. I don’t know how to make a graphic for this idea, sorry.

Thank you for the vote and your feed back, I love your idea and will take some time to look into working on a graphic for it and shar it here…

First two are excellent, third one is iffy, fourth one I don’t quite understand the point of.

Wanda-Ful could give you more insight on her idea, but I believe it is intended to show players what the guild does on an average and could be a factor in the very competitive guilds getting the hard core players to join.

I can see the appeal in seeing who is online around the times you are and in the LT tracker. Would like the online tracker to have a third option of invisible for those who want to be undetected insomniacs

Not keen on kingdom levels being visible since after first few stars it is a tracker of the effort people put in traiting and levelling troops they never use and does not benefit the guild much. (9th star requires 3 traits on 16 cards!!! #£%€#!!!)
Guild leaders giving out extra rewards may be difficult to handle without friction and the rewards would need to be sizeable to be worth the risk.

Hello Sigrid… Sure do thank ya for your comment. I personally do not want them to add a invisible option if they add the online light option as the point of it is so GL and other members know a person is playing… Invisible would defeat that.

I totally understand where you are coming from on the other part. If your guild supports you as a leader and you are fair in the rewards, you should not have the friction you mentioned. I have built a stat tracker for our guild that would back any reward I was to give out. This way a member can not complain if they are being out played and the proof is there…as I mentioned… the numbers I inputted is just a example and the DEVS would have to decide what is reasonable…

Thank you again and have a wonderful day… Please get the word out to your guild to vote as well and give feedback.

I’m pretty sure the game used to show online status, but it was removed for anti-harassment reasons. We were lucky they let us keep the “last seen in” status on profiles.

yea heres pic from when that was ingame 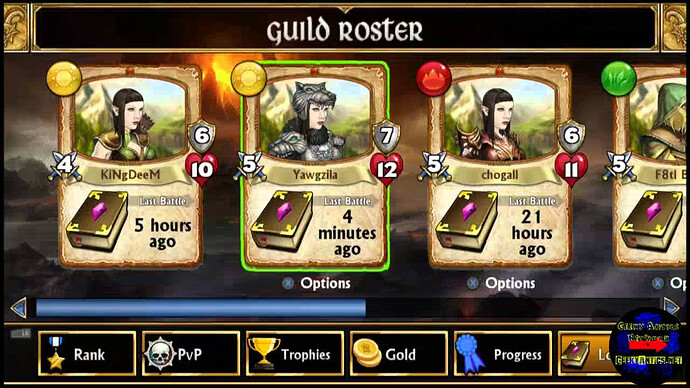 Ooh that game looks nice and fantasy-style, what is it?

Thank you very much for that info. I suppose I could see why they took it away. But is it such a good tool to montitor your members and see when they are lying to you.

Janius it is called Gems of War.

Nah, I play Gems of War and it doesn’t look anything like that stylish fantasy old screenshot…

Janius it is called Gems of War.

He knows, he played the game when it was called “Stones and Sticks” a little after the extinction of the dinosaurs, Sirrian was already bald by that time mind you… He is just pulling the dev’s leg because the game lost it’s cool visuals.

After reading it again I got the sarcasm…