Out of Yellow deeds and yellow books

I’m completely out of Yellow deeds and yellow books now. So please bring on the ingot offer that was cultivated from my 229 clicks right now. Because you’re too lazy to code the soul forge to result in anything being done when holding the button down.

Screenshot_20221125_0803011920×749 71.5 KB
Bonus points. At least you were smart enough to cut off Trait offers based on level of the player? Unfortunate the same couldn’t be implemented with Weapon Ingots. Why do book offers still not exist? Oh yeah because you lost the one person able to code existing/new offers and now the broken system exists as a daily reminder how this game reinvests 1% of it’s revenue back into it.

There should be happiness when reaching this point of the game. Instead you reward me with frustration. Shameful. 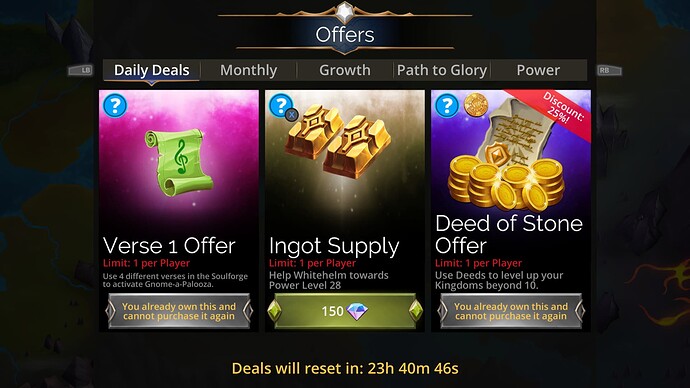 There should be happiness when reaching this point of the game. Instead you reward me with frustration.

Absolutely this! I’ve got the feeling I’m being punished for my dedication to this game.

But I still hope that daily offers will be fixed.

Yes, Books are really the show stopper as you folks predicted when they expanded the Kingdom levels, I’ll give you that. I’d rather them focus on adding writs or random colour deeds to Treasure Hunt but nooo, everyone else wants them to fix Dragon Eggs.

Anyways, I do have a question. So I’ve been leaving Kingdoms parked at Power Level 20 to avoid the useless offers. I’m finishing up classes now (probably another 3 months or so?) and let’s just assume I’m going to medal every troop.

A wonderful event key offer is triggered when you need deeds or books.

Awesome, so I won’t move them then. Ah, dreams.