(Not a Bug) Megavore can double instakill on a 4 times match?!?

Screenshot or image:
N/A
What you were expecting to happen, and what actually happened:
I was trying to play a PVP match versus a team that incorporated Megavore and win, but when the enemy got a single 4 match, Megavore instakilled both my Divine Ishbala and my Infernus off of that one match using his last trait. There were no follow up multi matches that occured from the original move.

How often does this happen? When did it begin happening?
This has only happened once so far, considering the rarity of an 8 percent procking somehow twice in one match in PVP. I haven’t seen it occur before in any of my matches with and against Megavore.

Steps to make it happen again
Play a PVP match versus a Megavore unit in an enemy team and let them take any one 4x match that procks an instakill. May be incredibly rare but it did just happen to me.

It’s a good possibility the opponent team had a hero with the Shadow tree (Assassin, Thief, Orbweaver Class).
Rising Shadow can insta-kill a troop which may have triggered after Megavore’s kill. 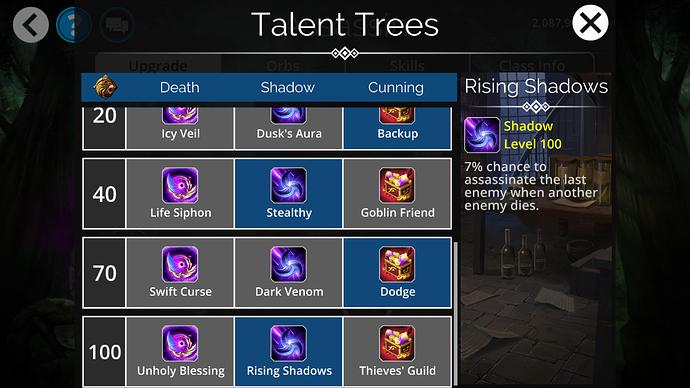 You know, that might be the case. I was so shocked to see both back troops die in the AI’s first move that I didn’t consider that may be the case. I’ll have to look on my console’s recording and see if it shows that trait going off. Thank you!

In fact, I went and did a frame by frame on the OneDrive and it showed Rising Shadows prock as well as several other of the traits under that class. I guess Megavore wasn’t bugged there.

Also, speaking of Assassin, it has the rare chance to kill three troops in one move - skull-killing the first one triggers hero trait “10% chance to assassinate last enemy” and then above mentioned "7% chance to kill last enemy) kicks on on the new last troop.
Seeing this, the initial reaction is - what? how did that happen?

If you are lucky enough, you can kill all 4 troops in 1 move, as the 7% trait can trigger multiple times

@Buttsniff please add Not a bug to your title