[Not a bug] Dungeon Rewards 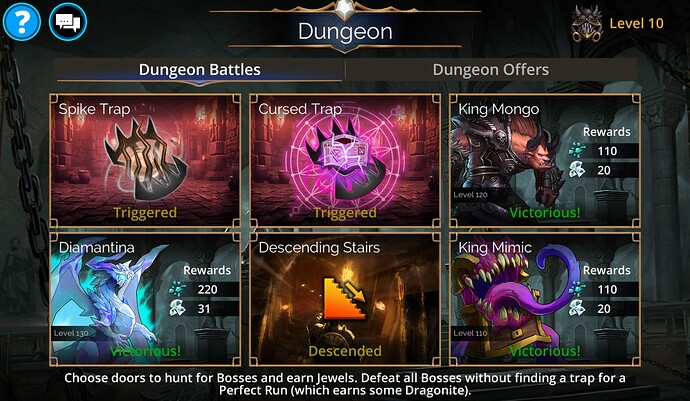 What you were expecting to happen, and what actually happened:
I descended to dungeon level 10 today, before doing the battles. According to the release notes, that should give me +1 diamond per fight, double for the boss. I only got +1 for the boss, no bonus for the other battles.

How often does this happen? When did it begin happening?
Started after going down to dungeon level 10.

I’m going to put on my Nostradamus hat and say: This is working as intended. “Future battles” means battles after next reset, as today’s battles are already locked in.
Poor wording, but that’s nothing new.

Also, there is a bonus for the boss dragon battle, but not for 2 other ones, and not the right bonus.

Looks like you are the luckiest in descending stairs!

Just investigating this one and wanted to clarify, Dungeon rewards will increase for battles not started after you have descended. You do not have to wait till daily reset.

As for the rewards, they are as follows from the updated patch notes

Mini Bosses will get:

While the Mega-Boss will get: