New World Event: Are you serious?

Guys, are you really serious? Making the medals of the event to increase skull damage and no skull generating troops in the available set?

That’s a joke, right? And you call it “balance”?

It must surely be a mistake as it’s the first time it has happened iirc.

Somebody was high on holiday punch, would deserve a punch to the face.

And what weapon should we use?

No skull troops, no skull weapons and only skull bonus from medals. That’s great 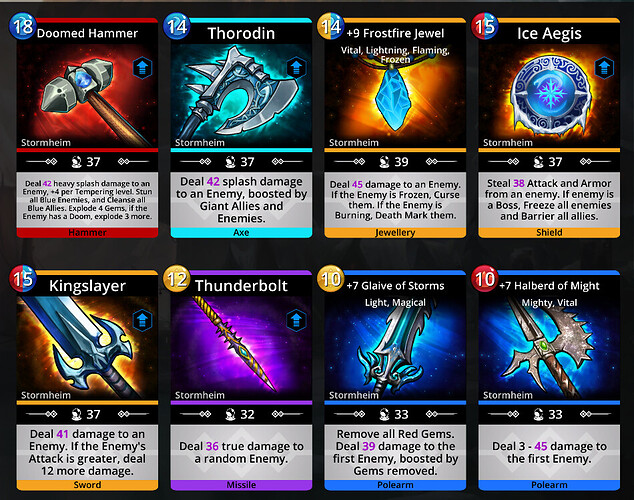 Ice Aegis and medals make hero hit like a truck with skulls. Best of the bad options, I guess?

Shhhhh, you better pipe down with that logical decision making. If the others see that they might complete the event and then the devs won’t have the data showing their medals failed. Def don’t tell them that it only requires tier 1 from the shop. That would also be very bad.

All kidding aside I’m with the mob here. Skull damage medals for ALMOST zero weapons/troops is a pretty big oversight. Hopefully this either gets changed for later this week, or they pay better attention when setting up world events months in advance(which i’m sure this one was).

While this in no way fixes the situation:

Again, this isn’t to say that it’s fine, “working as intended” or fun. But leaving these suggestions for those that might be looking for ways to make the best out of this mess (and happen to have doomed hammer).

Dejo traducción google para que los devs lo tengan facilito si leen esto:
It’s a real shame about this week’s event, I add to everything mentioned… Skull damage medals without troops or weapons to suit. I’ve had to go from kamikace with triple damage class burning knowing that if I lose the hero I have to retire… thing that’s happened. My question is? You don’t get tired of putting world events week after week that already tire, but also make them insufferable?.. Do you want to torture the players? Well if it is the latter they go very well because today I have thought several times while my colleagues and I wasted our time with this absurd event in DO NOT DO IT BY WAY OF PROTEST… it seems that for them everything is worth… and that shouldn’t be the case. It’s the worst event I’ve remembered to date. By the way… almost 300 legendary tasks done today and garbage after garbage… you get the urge to raise gold.

They want us to spend more time playing - it is a time sink. They call it fresh gameplay, never boring

So if this is their latest attempt to get us to play more, by letting the fights take longer, then PLEASE STOP.

Ice Aegis is exactly where I went with my team. Then I threw in 3x Frostfire King and chose Slayer for my hero (enrage on enemy death and enrage on 4+ match and 3x damage to burning enemies). And a 4+ match puts Burn on up to 3 targets. Ice Aegis steals like 40-50 attack (depending on other medals). When skull matches DO come up, you one shot, easily.

I was looking for a thread with ideas for event medal effects. Either didn’t spend long enough searching or no one’s made it yet. Think we could spitball a few ideas we’d either like to see or would find interesting.

I was thinking of medals that boost spell or skull (depending on what types of troops are available) and then have a secondary effect that mimics some of the better traits on 4/5 matches. For example Boost spell damage & freeze a random opponent, or boost skull damage and enrage 1st troop. You could also put in secondary effects that can be used for any team like cleanse (or bless) an ally, barrier random ally, Stun all enemies, entangle first enemy troop, ect. There’s at least a dozen things you can put on there that would not be game breaking.
Another option would be to have a small additional boost for having the troop type of the week. For example, this week, +5% bonus per giant type in your team. This bonus would stack on the bonus given by the medal.

I’m with you. This is the first time it has happened as far as I can remember and I have played all the events since they started. I have spent A LOT of money on this game, I know that is my choice, but I am seriously starting to get bored. When event play is so slow it really is an effort to play. I a, sure I am not the only one.

Black Ice is a failure as a gaming experience