New Hero Class: Barbarian A new Hero Class has been released, the Barbarian. Complete Dark Song’s Barbarian Training quest in Grosh-Nak to unlock this Hero Class. Also to celebrate the release of this new class, we will be running a Hero Class event over the weekend. Particpate in this event to help earn Champion XP…

Just an example from the Barbarian class. The last skill in the tree for any classes should be great. This provides zero for the hero or orcs. Other than that the class is far from the worst we have. Bloodthirsty and Lightning Strike options, as well as storms. Also the class have a 50 % mana start chance with Gar’Nok.

It would be cool if you made unique level 100 skills to choose from on every class.

I saw the icon (WOLF!, horns, antlers?, hammer) in upcoming events and my first thought was Maugrim Woods.
Oh wait, that one already has a class, so Urska?.. nope
Forest of thorns, no wait
Pans Va…! darn
Bright foruhmmm
Wild pla…? neh

Yeah, level 100 should be special. Not insta-nuke-OP special, but “better” special.

But they put like 10 minutes into class design a couple years ago
How dare you ask them to spend a minute more to make them relevant?!?
That’s like asking for +3 attack trait to work correctly upon release…the nerve of some people…

+3 Attack when matching any color gem while using Doomed Crossbow works fine for me. Quit trying to nerf my Hero Class y’all.

I was wondering why Sin of Maraj was Kingdom for Orc Class release; thought maybe Daemon would release 1st instead. Nope, it was so my two alts could forge Crossbow. Well played Devs. Much obliged.

I like the new axe emoji. The helm looks good as well, but it doesn’t fit my big ol’ head.

Was good to see there were only a handful of unlock battles. The back story is kind of amusing still in small bursts, but it was nice to only have 5 battles or so to unlock the class.

+3 Attack when matching any color gem while using Doomed Crossbow works fine for me. Quit trying to nerf my Hero Class y’all.

You’re the only one pointing this out on this thread at least.
So word of advice… If you don’t want something changed.
You may not want to point it out on an official news thread.

Haha I was using doomed blade in a red looper team. Gonna be tasty when 3rd trait gets fixed.

FeelTheBurn alluded to it in the post above mine without going into specifics. I doubt any dev would read my post, so I think I’m safe. crossing fingers

Salty’s job (well part of it) is to try and read every post she can here. Outside of bug reports, I think Kafka focuses on them.

Funny, we are probably heading for a reflexive nerf in the near future, but I wish they wouldn’t. As-is, this is a creative and unique trait that is a solid buff for Barbarian class.

I would at least wait and see how this plays out before just nerfing “because it wasn’t the intent.” If it ain’t broke(n), don’t fix it.

I would at least wait and see how this plays out

I’m thinking we’ll get the weekend to play with it for this very reason (and also perhaps since it’s not exactly game-breaking – perhaps an argument in its favour).

“Orc[ish] Fury Vengeance (/similar): Gain 3 Attack and Enrage myself when I take damage”

worked in, somehow – we still don’t have any troop that becomes Enraged when it takes damage, despite it being a common trope in movies and Barbarian-types in games – and I think that’s a shame.

it was nice to only have 5 battles or so to unlock the class.

This is normal, actually

all Class-unlock quest lines are four battles long, you just usually have to complete all of the other quests first, while a Class Trial lets you skip straight to the unlocking. 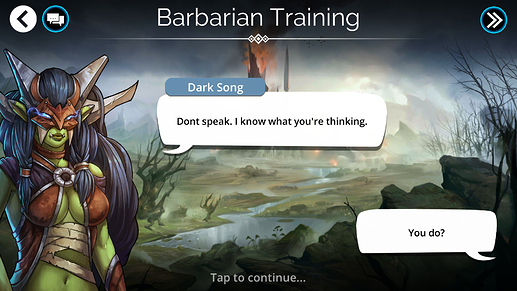 I think this should be “Hush, now!” instead of the current comma-less version in this frame, too: 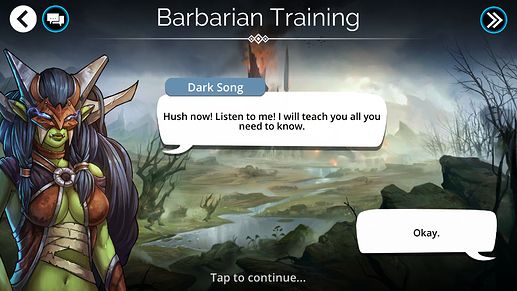 @ChunkyMono seems like maybe you were a bit of an influence for this one? 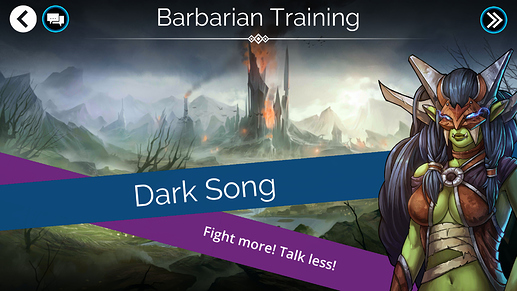 Apply the same metric to GW Bracket winners and losers

Maybe. I’m not really much for thinking. I’d rather be fighting.

Apply the same metric to GW Bracket winners and losers

And, heads are for butting.

My college roommate said I was a caveman, on account that my answers were brief and to the point (back then, anyway). “ugh, grunt, yeah”, according to him. Hero’s last phrase in quest: grunt.