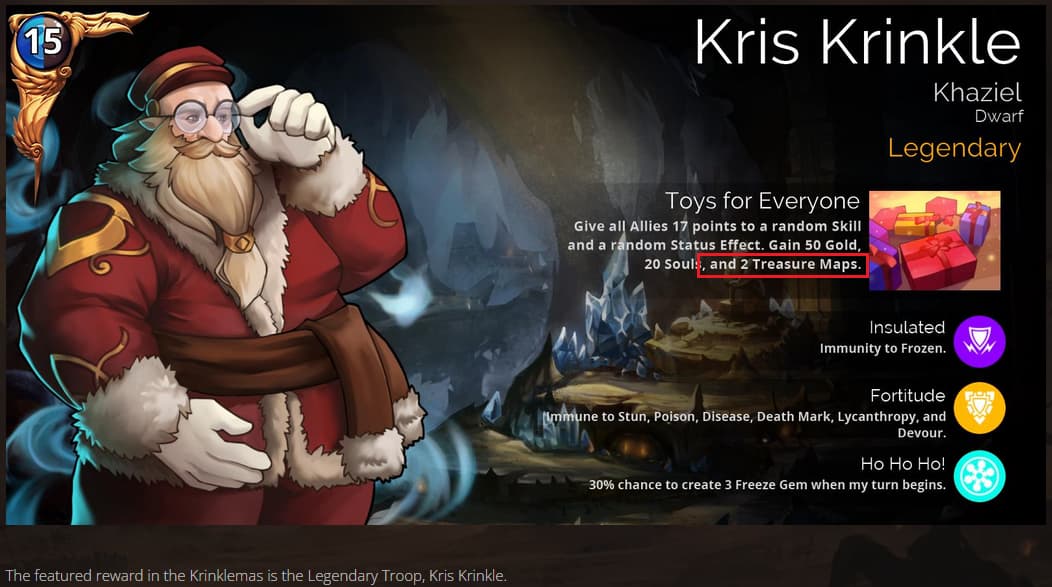 What you were expecting to happen, and what actually happened:
I was expecting to gain 2 Treasure Maps from the spell of Kris Krinkle, as advertised for the Krinklemas event. The maps were temporarily removed as part of analyzing a ban wave issue. This issue was fixed a month ago, the maps haven’t been returned to the spell yet.

This issue was fixed

Are you absolutely sure about this part? Has this been confirmed by someone, who actually works on the game? Forum moderators don’t count.

Lets say we talk about Kafka, Jeto, maybe OminousGMan and maybe Nimhain… I doubt I forgot someone else of importance to ever post in the forums during lets say last year.

They all are listed as “Developer”. Gems of war developer - Gems of War | Forums Not just “Moderators”, which would be another link. Even then, “Mods” mostly post their (pre?-)written stuff they got from - you know? “the higher ups”

Are you absolutely sure about this part? Has this been confirmed by someone, who actually works on the game?

It was confirmed by the Customer Exprience team:

We had a couple of developers, Nimhain (Producer, Head of CX) and Sirrian (Creative Director) working on the issue and resolving this for as many players as possible on Christmas day and Boxing Day.

This bug was fixed on Boxing Day (26th Dec), and all affected players should now be unbanned.
One part of the fix involved turning off Kris Kringle’s Treasure Map awarding ability temporarily so you will notice that.

This is more than “someone who actually works on the game” confirming it, this is official communication signed off by whoever leads the company.

who actually works on the game?

Does anyone “actually” do this???

Silly question. Why do we care about maps? I’m sitting 8k…

Why do we care about maps?

Well, without thinking too much about it:

Moved this to the Game chat section of the forum for now as this was an intentional change we communicated across multiple channels.

So we’ve now officially moved from “temporarily disabled as part of analyzing the ban issue” to “we don’t even plan with a date to ever put the maps back in”?

Moved this to the Game chat section of the forum for now as this was an intentional change we communicated across multiple channels.

Ouch. Bug reports usually get set to “Investigating” or “Not a Bug” to close them off. The borderline ones get bumped to Gameplay Feedback, where they still receive some visibility. This one must really have touched some very inconvenient truth to need to get buried in the the most remote and ignored places of all, Gameplay Chat.

Why do we care about maps?

There is also a fun team that relies on Kris creating the maps.

You said you identified and fixed the bug so it shouldn’t be a problem to add them back in.

You took them out lighting quick. Can’t be any more difficult the other way around.

I thought I missed something, like maybe he used treasure maps to increase stats. But it just looks like you can farm them really fast.

Then I wondered if there was a super fast way to burn a treasure map, but I tried, and it’s still a slow process for me.

So I can get them faster, but I can’t use them fast…. Or you can, but it’s ultra super secret so you can’t say here.

@Kafka , @Jeto , @OminousGMan , when are we getting the old Kris Krinkle back?

If they’re going to take long with this, I hope it’s added back when they bring that new kingdom. I hope sooner, but nope, things don’t get done like that around here, don’t it? This is annoying.