Is Champion Anu in the Event Chest?

Can somebody confirm? I’m interested in obtaining him. Thanks.

Not sure about event chests, but I got him from the raid boss shop earlier.

He is, well he was before the 3.4 update anyway.

Can somebody confirm? I’m interested in obtaining him. Thanks.

I’m on PC/Mobile and got 2 of him from event chests this morning.

He is in chests.

My luck is… I spent over 150 event keys (all I had) and then a few hundred gems. Nothing. AAAAAH! Thanks for replying though. Onto the next hunt!

Event chests are tough, many people spend 800+ and still don’t get a mythic from event chests.

Yay, i spend 750 event keys after reading Ashasekayi’s luck, but he ignores me

I never got a mythic from an Event Chest before. I normally only open Event Chests when there’s a mythic there I don’t have yet and I had CoA. But I really, really wanted just one more Ysabelle to get mine to mythic.

(50 more keys got me one Ysabelle and another Shadow Dragon then. Still kinda bummed, had hoped that 200 keys would give me more than one so that I could still run 3x Ysa + Tesla)
But having 2x CoA is pretty nice, actually.

Surprisingly, I got 3 Ysabelle from the Raid shop, and only bought up to Tier 4! Maybe try there if you were still looking for a couple Ysabelles!

Thanks for the tip, but I have still event keys left - before I spend any gems on a game mode I don’t even do, I think I rather waste the keys.

I spent almost 300 event keys and still can’t get Champions of Anu.

Would changing my avatar help? Lol

I decided to use my event keys and try for a Champion of Anu, since I don’t have him yet, and this is what I got. Lol, wanna trade 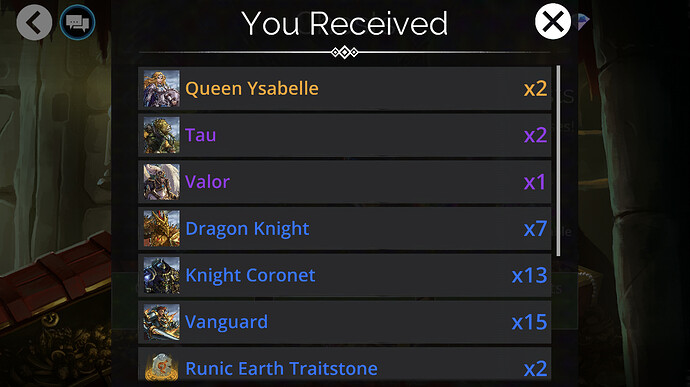 I spent almost 300 event keys and still can’t get Champions of Anu.

You’d actually have to get very lucky to pull Champion of Anu with just 300 event keys, your chance was roughly 25%. I wish they’d add a single diamond to event chests, that way you at least make some progress towards your next Mythic, even if you only pull duds.