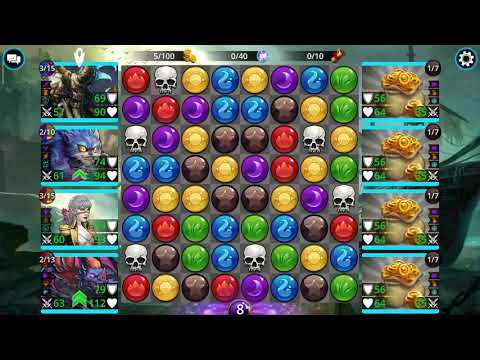 …and here’s one from PC (sorry for it’s bad quality, I wasn’t sure how to use it to record the windowed mode) 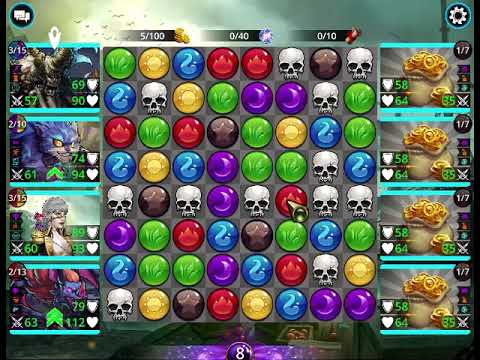 What you were expecting to happen, and what actually happened:
I expect my training battle goes as normal battle, but I can’t match any gems.
The pulsing of hint gems is also weirdly fast. In addition, for PC, the card switch animation and info card change is also unusually fast.

Steps to make it happen again
Use the team above in training. I haven’t test it with different defense team or different mode. I don’t know which team (or what) caused this.

Always happens to me (Windows, Steam) if I do this battle straight after game start. If I do any other battle first, everything is fine.

Also, if you add Werebat to enemy team, board freeze can sometimes happen on AI first turn, so it’s somewhat exploitable.

Wild guess, it’s caused by the Lycantrophy trait of Werebat, 50% chance to convert a Purple Gem to a Lycanthropy Gem at the start of my turn. Theory would be that it messes up the event stack whenever it happens on the very first turn, possibly based on other talents/traits/medals firing before it.

1.) Has anybody ever seen Werebat turning a purple gem into a Lycantrophy gem on the very first turn?
2.) Light Fingers also triggers at the start of the turn, does the game still get stuck without that talent?

If it helps my medals were 2 seasons and an anu.
I’ve been using stacks of Werebats in other game mode and they can trigger first turn no problem.
@zRrr mention it can happen with enemies too. If that team has a hero then maybe the class talent vs Werebat trait theory is the one to work with

This will sound weird, but TLDR is: If first battle in session has Werebat, there is a chance to throw exception during Lycanthropy trait check, boosted by number of pure brown AI troops.

4 Werebats vs 4 Coin Purses made it happen 10 restarts out of 10. 4 Werebats vs Coin Purse and 3 Cows - 3/10. Reinstalled GoW to SSD - same results. Other treasure troops are fine. Retreating and repeating same battle without client restart sometimes work, after that everything works fine until restart.

Spells, that don’t requre target on board (empowered, leprechaun - good, astral spirit - bad) can unstuck it, as usual, but on next turn everything repeats.

confirmed this, also breaks on beta.