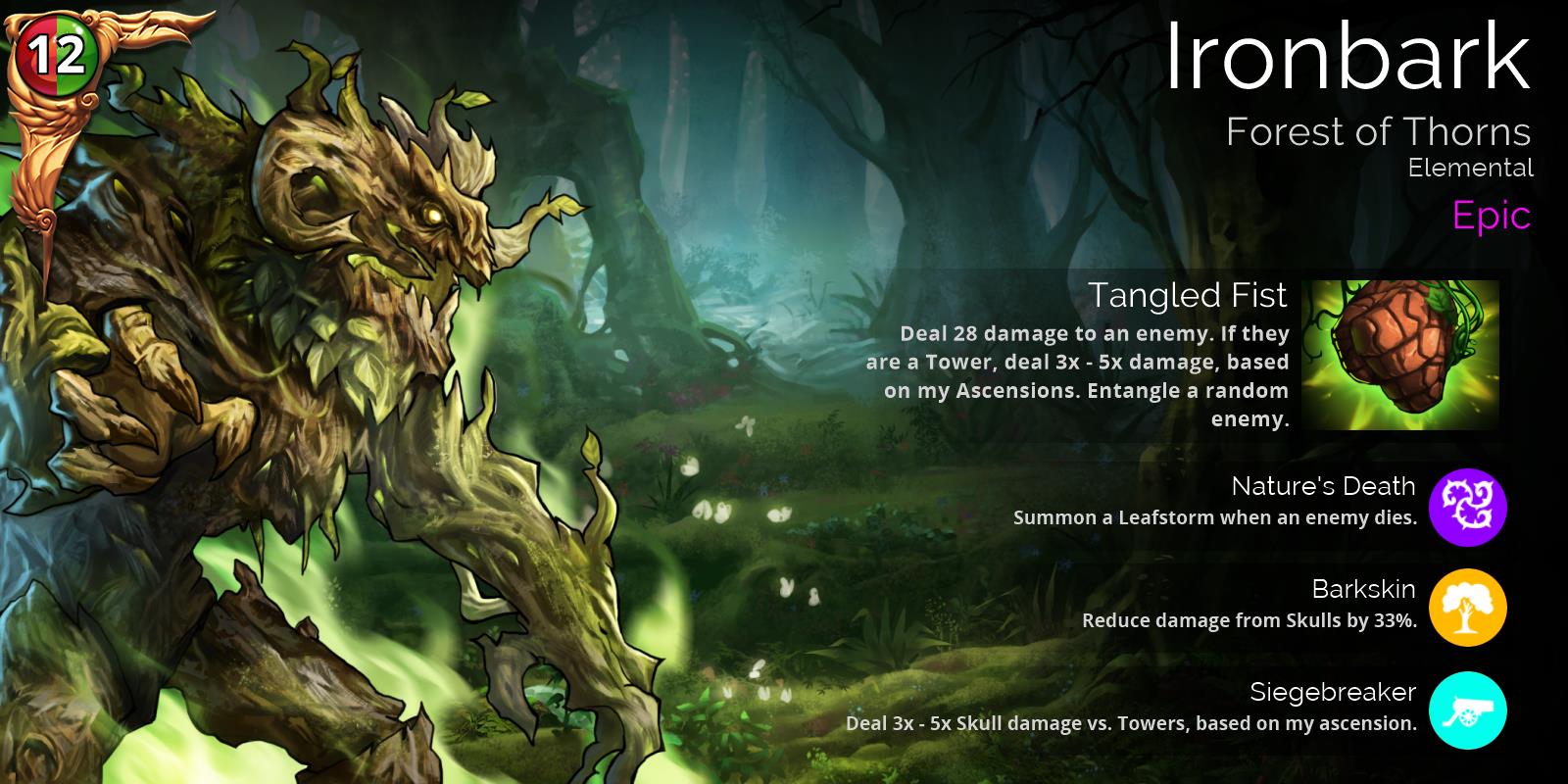 Ironbark has returned to lead the Elementals during this weekend’s Invasion. You can get him from the Event shop during this event. 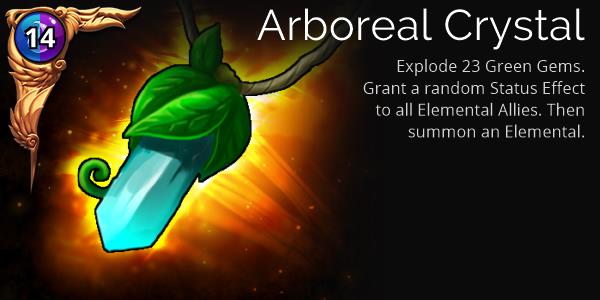 Can’t recommend this team enough, at least so far (fast and effective): 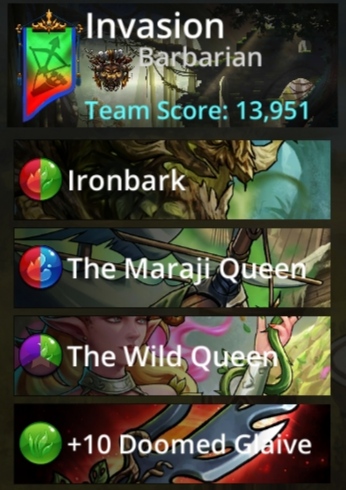 Edit: I’ve moved Glaive to 2nd place, which feels (and fills) better. Wild Queen still fills from explosions of the other colours.

Obviously there are millions of other options. Barbarian for starting Leafstorm and Lightning Strike.

Question on the Arboreal Crystal weapon:

I recorded it and i can confirm that the spell is executed first and then the Primal thing (which of course doesn’t do anything since all green gems are already exploded).

Only useful case i can think of is when the hero’s magic is reduced to a very small amount (also when webbed).

Edit: I confirm when webbed, it explodes 1 green gem and the Primal thing effectively destroys 3 gems after that.

reminds me of when Mountain Crusher had explode 1 brown gem as part of its affixes. it was useless then too

And the follow up question of why it can’t be changed to practically anything else.

Which is why we complain.

best event this week! so many choices.

i will go out on a limb here, best event in weeks!

This event has good troops, so good I dare say it:

Now if they’d only give us a way to be an Elemental for our Hero… Three Missing Classes - Time To Find a Home! - #6 by TheIdleOne

How do these things make it passed QA? Serious question.

One of them said they use the broken blade as a “Hail Mary.” Right, because when I throw a Hail Mary I want my receiver to suddenly change jerseys to the other team and start running the other way. It was the most absurd, bizarre take I have seen on here.

Don’t you get 100% of mana for those, then 50% mana for the ones it explodes? I get that it’s weird to remove a few gems, then explode things. For pure mana gain (green), it is an improvement. For a board weak on green, it’s not great.

It would, but unfortunately it first explodes every green gem on the board before doing that (and it doesn’t wait for new gems dropping down so you get 0/3 green gems destroyed by the affix). Unless you have very low magic of course as explained earlier.

I always thought the way gems explode, the size of the board (64 gems), and how magic scales, incredibly dumb. We’re up to the point where we can explode more gems than would ever be on the board for that color. Explode 40 green gems? Are you serious? You know, there’s reason troops like Infernus explode a flat 5 gems, or Abysnia (sp) explodes 15 gems.

There is clearly a point at which you can’t possibly gain any more mana from increasing the amount of gems you’re exploding. I’m 100% certain you don’t gain more mana from exploding 64 gems vs, let’s say, 30 gems, because at some point gems have to overlap, or the same gems are being exploded, etc.

It’s very different from say Egg Thief which destroys, instead of explodes, the entire board of gems, which nets you 64 mana, minus skulls, spread out amongst the colors.

Partially that (how does it bypass QA), and then the rest is a response to this comment:

I am happy for the affix not to be changed. Someone asked to see if any such person exists.

I use it as a hail Mary when I don’t have a move left. There might be multiple blocks of near 3/4/5 matches on the board. Or it may just be that last kick I need to lob off the top enemy.

Can we approach Kurandara and Enraged Kurandara the same way? Put some mix into the game? Choose one and forever hold your peace. Variety is neat.

It is what it is. I am happy

Edit was just to make the comment visible, rather than hidden behind the hyperlink

Oh, but that’s just us making the community toxic when CLEARLY everything is FINE and negative feedback is not warranted at all. Oh, and you can just wait to be insulted and censored for daring to have an opinion.

Thanks for clearing that up for me. I was literally walking out the door from work while I was typing that. Been a long week 73 hours. Brain is mush and needs some beer.

The only way it’s a downside is “it could have something different, perhaps more beneficial.”

It makes me think of Mountain Crusher, but Mountain Crusher gets to explode one more gem. I just read that as, “If you’re webbed, there’s still some explosion effect”. Sometimes the game’s going so bad I YOLO that and it works. When it doesn’t work, I don’t get too upset because I don’t expect exploding a single gem to have a lot of impact.

This is worse. “Destroy” isn’t the same as “explode”. But if the number of gems you explode is magic-based it’s similar: the opponent can’t web away the affix. It’s not a lot, but it’s something. And sometimes that’s all you’ve got.

Would I like a better affix? Sure. But at least this one doesn’t make the weapon worse, like when the same effect is on a generator. Then those read: “Create a lot of great matches. Then ruin them.”

Maybe an obvious point, but this weapon is pretty good. Shame it has blue to overlap with Jar of Eyes, but those are some good affixes and the summon can also be handy. Def an addition to the endgame arsenal.