Prior to patch 2.0, choose a “home kingdom” had an interest for the tribute, but also choose the color of runes during PVP revenge.

Currently, in contrast, your “home kingdom” is no longer account during revenge, but that of the opponent.

I’m sure like me, many of you will find this blazon:

And yes, as now, only the tribe has an interest in the choice of “Home Kingdom”.

Then what is the impact: a ton of yellow traitstone !!!

So if everyone chose Whitehelm because it brings the most fame, won traitstones in PVP will quickly become useless.

@Nimhain, @Sirrian Would you have a solution for that to change …?

Even pre 2.0, my home kingdom was Whitehelm for the glory.
The problem is that the best soul tribute is what? 160 souls for home kingdom Khetar ? That’s 2 battles with a Valkyrie. Best gold Kingdom would be Khaziel with 1000 gold when it’s the home Kingdom, wich is one PvP battle with any end game armor.
Glory on the other side reach 40 with Whitehelm. Even in ranked PvP against the strongest ennemy being your rival and a revenge battle, you get 9 (?) glory. So 4 battles in the best possible conditions doesn’t even get you the resources for that tribute. No wonder it’s the most valued tribute.

There was another thread that brought this up about a week ago.

This has been an issue for a long time, but 2.0 has made it much, much worse since you no longer get Traitstones from your home kingdom when you do revenge battles, you just get stones from the kingdom you invade. As a result, you personally have no reason to go anything other than Whitehelm, since you don’t get revenge stones and nobody else does either, since they don’t get revenge stones. The remaining holdouts that aren’t in Whitehelm either don’t have the resources to get Whitehelm to give as high glory/week payout as another home kingdom, still believe they can influence stone drops (ie., are not aware they do not get targeted revenge drops), or are purposely taking the weekly glory hit purely so people that invade their kingdom can have better rewards (which I do, but this is very counter to the way PvP is designed, and I dont expect many to do it).

A way to target invade a specific kingdom in Casual PvP would be nice, since that mode is currently pretty useless (maybe choose a kingdom and that kingdom always appears in one of the slots?). In order for that to be even remotely effective, though, there has to be at least some reason for people to set that as their home kingdom in the first place to populate the matchmaking, so at the very least, getting stones from your home kingdom for revenge battles needs to return. A very very VERY distant second place idea would be just to full random the PvP stone drops, which I am highly against, but it would be better than how it is currently.

I just change my home kingdom to the event week kingdom. No idea why, I just like that.

Glory on the other side reach 40 with Whitehelm. (…) So 4 battles in the best possible conditions doesn’t even get you the resources for that tribute

I agree with what you said to some extent, but there’s a fault in that logic.

Of course it applies to other resources too, but my point is it doesn’t really matter which kingdom you choose as home - it has more meaning to your opponents (stones gained) than to you. Unless you have different levels or Power Levels in different kingdoms, but that’s another story. I simply stayed with what I had selected pre-2.0 (Divinion Fields).

Yeah I previously brought up the issue to the devs and proposed that Revenge battles should again be based in your current home kingdom instead of the opponent. In the meantime I decided to base my HK in Wild Plains since it provides the second best Glory tribute and provides red and green stones to my opponent, which seem to be the most sought after. Taking one for the team I guess!

so what can we do?
Possible tracks:

Well we do have a lot of kingdom leveling bonuses already. Perhaps have the Home Kingdom give the Hero character some minor additional boost? The Hero still gets underutilized in the late game in my opinion and when it does it’s based on several uber weapons. Have the HK provide either a minor stat or perk boost to the Hero based on the kingdom/class interaction.

I don’t see a reward resolution that would satisfy anyone to incentivize switching home kingdoms if traitstone drops remain as they are in their current state - certain kingdoms are always going to be more popular than others. Anything else added as a home kingdom bonus (stat bonus, mastery bonus, etc) is either not going to matter or have a “best” one that gets gravitated toward. For example, if suddenly you get an extra +1 stat point bonus from your home kingdom, you’d see an increase in Zhul’Kari and Wild Plains for magic and attack simply because they give the most extra glory for their respective stat points. Still nobody is touching Forest of Thorns and Adana. If there is a unique bonus, there is a “best” unique bonus. If the soul/gold/glory ratio were adjusted, you’d just be moving the most popular kingdom from Whitehelm to something else. A very slow, and very temporary fix.

These were my suggestions, in order from most preferable to least:

Basically, you need your home kingdom to influence your own traitstone PvP drops in some way if you expect anyone to set their kingdoms so other people can get traitstone drops. I would prefer a high amount of influence, but even some would help to spread out the kingdoms a bit. Then you’d trend toward the popular tribute kingdom (whitehelm) the popular/needed traitstone at the time (maybe Pridelands) and your own home kingdom (which you could then select for stones that YOU personally need). Right now I’m seeing at least 80% on Whitehelm, and I’m pretty sure most the others haven’t caught on that revenges don’t take place in your home kingdom anymore.

I like the border skirmish idea! If the revenge home kingdom is not restored I do like the idea of PvP traitstone drops being a blend between the invade and defense Home Kingdom. Thus if my Wild Plains invades Whitehelm I could get a chance of red, green or yellow stones dropping.

You get those 40 Glory if Whitehelm is your Home Kingdom, but if it isn’t you still get 20. And that’s only on 10% chance (provided lvl 10 and *** of course), so the difference is only 2 glory/tribute on average. On the other hand if you choose another Home Kingdom you may get some bonus Glory from there - anywhere from 0 to 16 AFAIR, on the same 10% chance, so the average loss may be as low as 0.4 glory/tribute.

True, I had considered that at some point, wich is why, just like @Emos I had moved my Home Kingdom to Wild Plains for a while, back in 1.9, but now that I’m not gaining the traitstones of my home kingdom myself, I don’t bother anymore and still pick what holds the most value for me, wich still is Whitehelm, none the less.

so what can we do?

This would seem like a good start to me.

EDIT : of course, you could also make it so that players get more glory from other sources, wich would lower the value of glory. That’s something that was initiated with 1.9 (?) rewarding 3 glory for PvP and is now stronger with ranked PvP (ranging from 2 to 9 glory) but still not strong enough.

Actually I wanna complain about this long time ago but my English is not that good, don’t know how to explain myself clearly. Finally someone else said it! 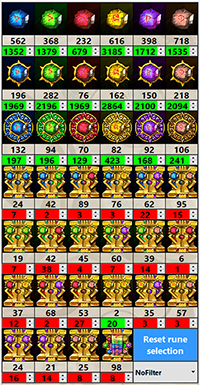