If there are 13 or more gems on the 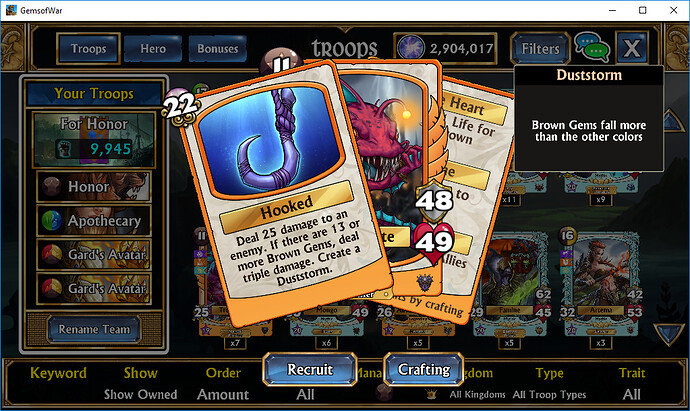 Like this Troglodyte brudda. We see many troops that requires 13 or more of a mana gem color to do something extra. Is the number 13 a little cheeky and much to ask for generally?

No, it’s not. It is neither too easy nor too hard. In short, Goldilocks, it’s just right.

Yep, that’s why it’s 13, otherwise might as well hard code the double damage.

Its a little cheeky on a few troops, but I will survive.

Which ones do you feel it is not needed?
Wait, I may see them appear in the other thread?

But 12 gems instead of 13 would still not have burned my fingers.

“Fun” fact: In the game data files, the condition that checks for 13 gems of a given color (for instance, Blue) is still called “AddFor10BlueGems.” It makes my eye twitch when i see it.

Back then, Mana Shield didn’t exist yet on anything that mattered, and Impervious didn’t stop Mana Burn. Ah, memories.

Mab, Mab, Valkyrie, Mercy was a powerhouse team that was coincidentally all pretty women.

And before that, there was Mawrcy. Remember when you were on pins and needles from the word “go” because Hunger meant one Skull match would wreck your tank?

And yes, True Shot meta, probably the worst of them all.

Man, the current gripes seem tame when you take the long view…

I think it was a mistake to be make traits that makes troops imune to manaburn. Manaburn had such a potential, and I hoped to see many more troops/weapons with a manaburn skill, sadly those stupid traits destroyed my wishes.

Mawrcy is still fun to use, but before it was extremely fun.

It was hurtful to get it against tho.
I want what is fast to use, I have found a few builds that takes 1-2 min in average. I am happy with that.

And yes, True Shot meta, probably the worst of them all.

The Webspinner / Venoxia was not bad either. The best thing was to go do something else while the team of the opponent was looping and looping and killing you so slowly…

Imagine a troop with both manaburn and drain mana in same skill, possible a new Legendary/Mythic.

Done! Or did you mean this?

haha, well, I must admit I am a little drunk today.

13 is a fine unless we’re talking about kruarg the red.