How often will you be viewing in-game ads?

As much as possible.

Probably not much, honestly. I’ve watched 3 so far and earned a total of 400 gold. Not worth the effort.

The rewards are pretty crap. I’m level 1,202 and I’ve pulled 400 gold twice already. 30 seconds of PVP typically equates to 9k gold so that was a less than ideal way to initially describe it.

But I’ll still be watching them when they pop up because I’m doing it to support the devs. Everyone keeps screeching for more content and fixes but refuse to be a part of the process when a way to give them more flexibility to do those things shows up. This is a perfect compromise in my opinion, I don’t have ads shoved in my face if I don’t want them and they get their checks from the companies they run the ads for.

As I said in another thread, as soon as they go past this point and force themselves open or jump up when I try to change tabs or something, I’m completely out and it was nice being here while it lasted. But I don’t mind setting my phone down for 30 seconds with the sound off every 8 hours to keep that from happening as long as possible, even if the rewards in-game were non-existent.

It’s just a small way to toss a “thank you” off to the devs and I really hope more people start doing it soon before they change it from a 3rd tab on mobile to banner ads and premium subscriptions to remove them or things the other mobile games do that end up pushing me to the uninstall button.

I wish capitalism wasn’t a thing either and we could all just work on things that we were passionate about without money being the driving force behind that decision, but everyone seems to like their Coca-Colas well enough so let’s just suck it up and click the button before we lose even more players than we did after 4.7 to forced ads for crack pipes from Wish.

I just can’t condone the persistent green exclamation mark if you haven’t watched the available ad, blinking or not, so unless that changes, never.

If it wasn’t there, I’d probably consider watching it every now and then as a favour. And out of curiosity for what gets advertised

Edit: On second thought, thinking about it a bit later, I can see how the 100 Gold would really just suck and stick it to you. If it was ~3000 Gold consistently, then my second paragraph would apply.

I’ll grab them when I see them available. I’ve watched 3 so far, and this is my option 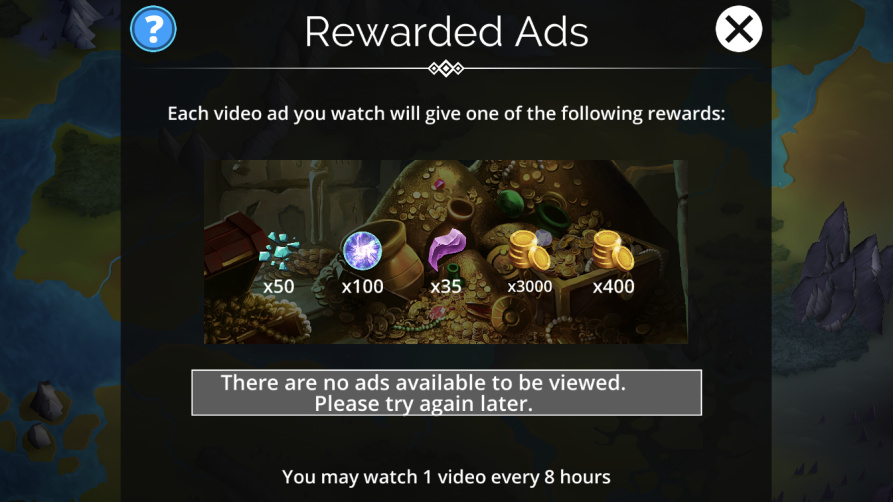 One more element that may be worth mentioning: given this developer’s history of QA, can we trust that whatever is sent to our phones through the ads truly has zero malware?

I’ll grab them when I see them available.

I believe this has to do with the regions’ and their own ads available. The first two ads I got were only 10 seconds portuguese ads for Facebook. Today I got another one and the last ad I’ve got was an english one and it really took 30 seconds to finish.

Took a few hours, and an icon appeared on the home screen next to the reward ads. I clicked and there was an ad to watch. So I’ll just wait till I see this icon, and not just wait for the 8 hour window.

I’ll be honest, and sorry for my language. But the only time I will watch these ads going forward will be when I’m on the toilet taking a number 2. Only then is it really worth collecting because I’m not really wasting my time.

I strongly disagree with this statement. In fact I would prefer a finished game version. And I have long ago reached the point, where something I started as a neat half hour distraction every once in a while has turned into an overladen mess, that barely allows for a day off.

The ones interested in new content are not the players, but the publisher, because a player, who has reached a definite end, is unlikely to spend money.
I would not hesitate to choose less content. Strip this game back down to a dozen kingdoms, PVP and maybe 100 creatures and leave it like that, and I’ll like it more.

(As a side note, muting your device while showing ads and not interacting with them does not sound like as much support towards the devs as you think it is. These sort of things tend to show up in analytics.)

But the only time I will watch these ads

I don’t get it though, if I had my phone on GoW while doing that I’d just do explore or something, forget these stupid ads …

I don’t play on mobile but would probably run the ads when taking a ‘bathroom break’ if I did, they bring in some revenue for the devs which is good I guess

You get double crap rewards that way too

Shimrra, I need 30 seconds to wipe my arse

For those of you that are against the ads (whatever your reason), how much TIME have you spent reading and / or replying to this thread instead of “watching” an ad to support a game you obviously enjoy?

Instead of some random petty reward, how about we just get double rewards from our next tribute? Then it would scale evenly for everyone.

I strongly disagree with this statement. In fact I would prefer a finished game version. And I have long ago reached the point, where something I started as a neat half hour distraction every once in a while has turned into an overladen mess, that barely allows for a day off.

The ones interested in new content are not the players, but the publisher, because a player, who has reached a definite end, is unlikely to spend money.
I would not hesitate to choose less content. Strip this game back down to a dozen kingdoms, PVP and maybe 100 creatures and leave it like that, and I’ll like it more.

The exception doesn’t prove the rule here. If the players didn’t want the content, they wouldn’t play it, simple as that. Go into the search bar and type “request” and you’ll see you’re the minority in wanting less content. It certainly seems like circular logic to say the players who play the game don’t want new content, instead the developers are wanting it for them and the players are forced to sit and play the game until they’ve completed it against their wishes but they have to complete said content because they enjoy it and don’t enjoy it at the same time. New stuff is fun and there are a lot of fun games out there that don’t offer new content regularly so I imagine a lot of the people here feel the same way.

As to the analytics, if it really doesn’t improve their view count there are ways to make a player interact with an ad prior to giving rewards and if it changes in the future I’ll change my approach.

I’d watch some just to support the game but I’ve only gotten this screen ever since watching the 1st. Can’t watch something that isn’t offered to me 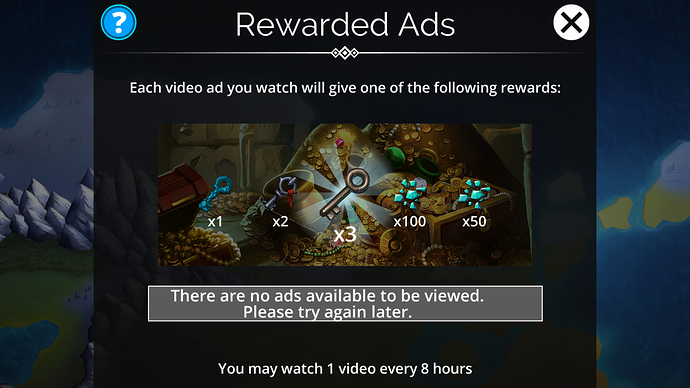 I watched 4 ads, and I received 100 gold each time. I know it’s only like 30 seconds or so, but it’s just not worth the time. For the time that it took to earn 400 gold, I could’ve played 2 PvP battles and earned a bunch of resources. The rewards should be improved, especially since you can only watch one ad every eight hours.

I will never watch ads but to be fair I’m VIP 10 so I’ve thrown them plenty of support. I hope they do get more support from more people and that it actually helps them make better content.