How do players feel about Epic Vault Drops?

King Cedric will drop up to x4 more loot compared to his regular counterpart in Gnome Vaults.

So when Epic Vaults were released (and after the customary period needed to extract the ballpark drop rate info from the Company, and the subsequent adjustments), we are roughly at a probability of 1 EVK for every ~10 Vault Key Drops, 1 Vault Key for every ~10 Gnomes (during Gnome Weekend), and 1 Gnome every ~10 explore battles (rounded for simplicity and going from memory, adjust as needed): that means that during a Gnome Weekend, players can expect an average of 1 EVK for every 1000
Explore Battles.

At ~15 seconds per battle, that’s roughly 4 hours of playtime.

A lucky guildmate decided to open the EVKs he received during this weekend, and upon his disappointment with the rewards he gave the green light to post the SS here, in the hopes that others may adjust their expectations and not lose much sleep over chasing EVKs: 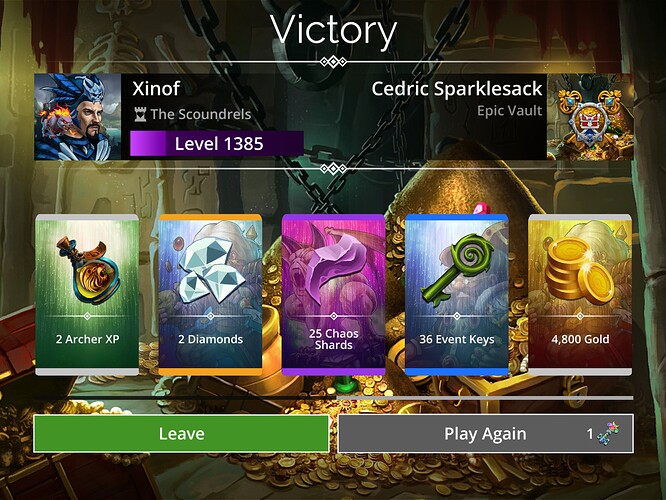 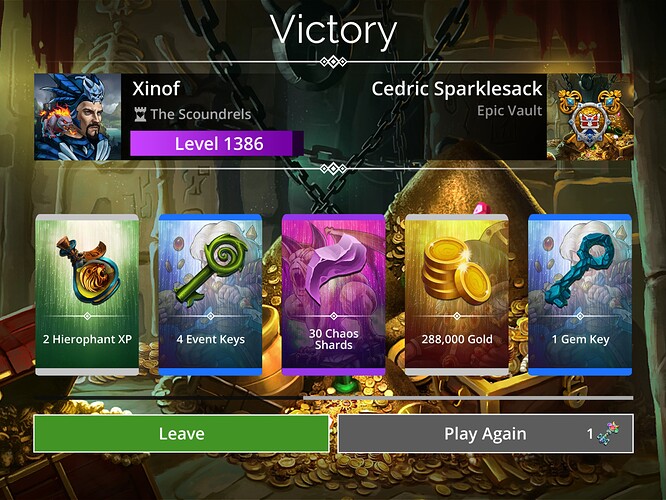 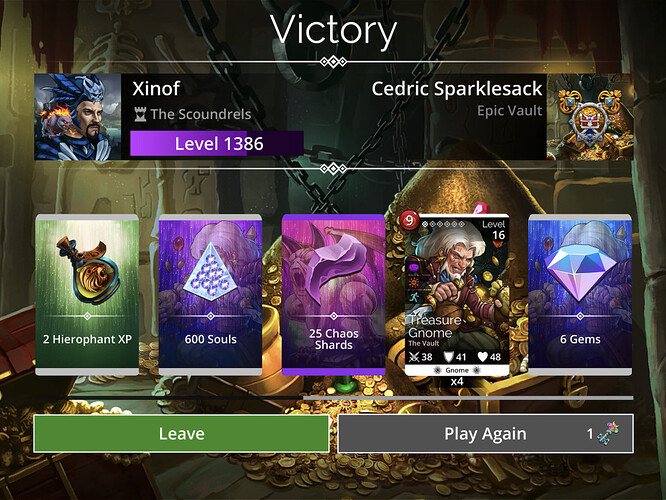 Are there any samples out there of best/worse EVK drops that could support the effort required to obtain one, or the reasonable need to revamp the types/ranges of the rewards found therein?

Yes, the two battles I did all had Daemon Gnome. I can’t remember what happened with the troops thing, but it was dropping 4x for a while. I only have one screenshot saved, this is from October 18th:

Personally, I think that since the EVK is so rare and it is just a random drop, it’s fine if the rewards are not epic. And they really aren’t, they’re barely better than regular vault, unless you get really lucky.

If EVK was crafted from regular vault keys or something, then I’d say the rewards should be better because you actually invested resources into getting access. As is, I consider it just a different flavour of VK (blue instead of yellow).

Just adding to data. (They were 3 Orbs of Wisdom, but I know EVK does not impact Orb RNG).

Let’s hope they don’t fix the number of copies thing, if folks are ever going to get a lucky number of Tarot cards…

My experience has been generally underwhelming with EVKs.
I think the only decent drop I have had was three small orbs.
Also the permanent inclusion of a Chaos gnome feels like either trolling or just another example that those designing this game have no clue how it’s played or what the actual relative value of resources are.

Awful. I just got some minor traitstones, some souls, chaos shards, and 2 major orbs of growth.

You only really need the first key for the achievement; the others are - meh, whatever. Might get lucky, might get totally trolled and constant Daemon Gnome in Vault is the worst thing about it (okay…a race between him and 2 minor traitstones).

Feel sad. Just got crap drops. I doesn’t feel the rewards worth the time lost.

Remember the game considers chaos shards one of the most valuable currencies. Which seems odd to many people but when you are trying to beat factions without potions (the original intended path) and facing 25m gold to raise your hoard to the 250+ needed to win, those shards become pretty valuable