How are you supposed to play against Virtue of humility?

What strategy are you supposed to use against players putting 3 of these fully traited in their deck. Espcially combined with a card, like the mythic that does 19 true damage to all.

You use can’t damage to all, because after one or two of those casts, the mythic can single cast wipe out your entire team.

If you take them out one by one, you again build up their mythic’s damage to insane heights.

Imo, stuff like this shouldn’t stack like it does…
I honestly wish for an option to only play opponents with 4 unique cards.
But any tips are greatly appreciated… Except for spending 50 gold on each battle to avoid teams like this.

If your opponent never gets to take a turn, their mythic will never get to cast. That’s how I’ve dealt with those teams.

use khorvash. the stun will stop humility. consider adding a heavy hitter that can target their key damage troop. for example lady ironbeard or minogar. you can use devour too just to target that single guy.

Spirit Fox is empowered so you can remove all yellow gems from the board on your first turn to give yourself a head start on colour deprivation.

You can also silence/drain Draakulis… or, if you want a challenge, try to kill all Humilities with Death Mark

I appreciate that people are offering up some of their strategies but that’s not really what this thread is truly about.
There have been other threads that have suggested the same thing, that you shouldn’t be able to use multiple copies of troops to stack your deck.
Some people will say “Too bad, so sad. My troop/team, I can do whatever I want. If you don’t like it, don’t enter the PVP match.”
I can’t disagree with this. If you don’t like it, move on and choose a different PVP match.

However, for the sake of variety and creating different combinations of teams, I don’t like the idea of stacking a deck with mutiples of the same troop…

It happens in any games matey. Although the best counter to that is a good Devour, One Maw Devour later no more damage

Things that counter this kind of deck :

But the two times I came upon this team, I just nuked him with my Dragon team that does damage to all, leaving him skulls for him to waste turns using them.

The devs have already weighed in on this subject with about as definite of a “not gonna happen” as you’ll get.

Just to confirm - we’re not going to ever restrict troops to x1 in any current game mode. We MAY introduce a game mode or mini game in the future with that restriction though, but for the CORE GAMEPLAY, there will always be 4x teams allowed

Thanks for all the tips everyone, it’s much appreciated!

Use Kraken. Wait. No. Don’t use Kraken. Especially don’t use two Krakens.

I actually failed hard against that team with even just a standard AOE team. Next time I swapped to Maw-Mercy instantly … 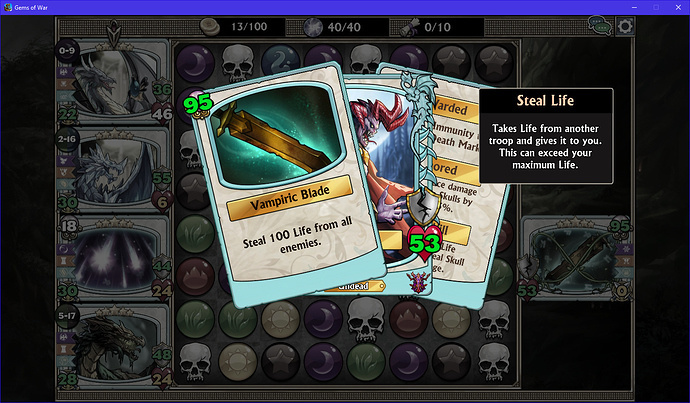 Yeah build Attack power and/or skull spawns and take each Humility down in 1-2 hits. Easy enough…

Or you can use a high damage sniper like Minogor and kill Draak first. Humility is pretty toothless without a true damage dealer to buff.

I had actually come to the forum just facing the same team. However I dont see the problem the same and still considering writing my own thread if it doesnt get attention.

Draakulis is the real problem here.

He becomes completely invincible to “normal teams” who don’t plan to counter such a setup.

The problem being is that his life steal works 100% even through barrier, so even though my normal team (Wraith, Monk, Dragon Soul, Slyvanimora) can easily take out all the humilities and ultimately not die to the Draakulis however I can’t win because his life steal goes through the barrier, by the time the battle is nearing this point he will be stealing 50 life per troop or higher giving over 200 health to remove before he gains 20 mana ( when hes the only colors…Easy! )

Add to this his Death Mark trait and at this stage he is invincible.

I do take all comments and yes I can beat this team, however as a player who is not VIP to pre view who I’am fighting I run 1 team that gives me 90% success. I don’t have a counter built into my team for this one problem that IMO is something that it shouldnt be able to do.

I think your problem may be that you’re not previewing the opponents’ teams. It’s only 50 gold, which is much less than the battle pays out. I am not VIP 3 and I still scout every match.

Honestly I think if I was scouting I would take less than battles than I do. Especially before bone dragon nerf, however yes that would definitely solve the problem to simply avoid that team or use a specific team for it. I also have 90% success rate meaning it would be 500 gold to save my ass once(potentially as this is the only team I technically worry about now) However in my belief I have a troop that counters any damage and as the draakulis should be doing damage for him to steal rather than him simply generating health out of thin air my team wouldnt need to be changed.

Also don’t use Death, especially not two Death. Triggers Virtue of Humility twice every upkeep and Dance Macabre won’t save you…

either snipe the mythic, mana starve it, or mana draing/stun

I imagine the people running these teams have a pretty high success rate on defense simply because its a standard counter to most teams that people run to have viable battle times e.g AOE troops dragon soul/slyvanimora. Along with the deaths and krakens. plagues standard teams people run…

Most of which id say is more due to the unique nature of draakulis rather than multiple troops or humility.