I need some help, As all of my teams are being crushed… I like fast matches, so I cant sit there for more then a minute swiping gems.

So I’ve tested all about 30+ teams I’ve had setup. And obviously I’ve modified a couple, and I can’t seem to freaking win!!! I cant win consistent, damn AI loops forever and skull bashes my Gorg, so there really isn’t a tank for me…

I also go around asking for teams or anything to help and NOT many people will help me… No idea why… Shoot, I’m sitting here losing a ton of times, asking for help and not many people help! So please anyone, if you have ANY GOOD, FAST, SAFE, WINNING, (that doesn’t take more then 2mins) please help me. Because it’s at the point where “Why play if you’re just going to consistently lose?” “should I just stop playing?” Idk

Hoping this side of community helps because No one else helped., help me out!

It would help people immensely if you stated what troops you have, or rather, DON’T have if you’ve got quite a few.

Right now it doesn’t do people much good in taking time to craft teams for you if you don’t have the troops to make the team.

I would only list legendaries you DON’T have and (base) Mythics that you DO have.

Link doesnt work brudda… Are you on console or pc/mobile?

Either way the team i use almost always is

Ah, got it now. I C&P’d it and guess I did it wrong. Currently on Pc right now.

Wait… Do I get the list right? You basically have everything save for couple of mythics? 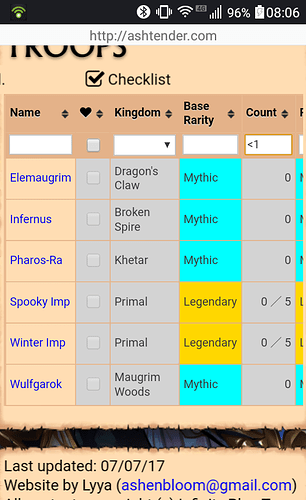 That is what you dont have

It’s hard to lose with it really. Three exploders = no mana problems, Famine is a sniper. Only really unlucky board against a team like just/mab can beat it. Use yellow and brown banner to get Gorg up asap.

By looping spider and seer you can basically hammer the opposition to death with Krakens 3rd trait.

Sacrifice hero with Elspeth and explode the enemy in seconds.

Other than that, the guardian teams:
Archon
Valkyrie
Justice
Queen Mab

The horror of this game, very effective.

Basically a glass cannon, but when it goes off…

this one courtesy of @Stan

It gets slaughtered down by Forest Guardian and them,…
isn’t good really.

Guys… Gem spawns are broken, I haven’t been using ANY guardians… All it does if feed mana for the AI.

Hahah, it’s sad but I barely trust a Gorg, it’s been dying on me way to fast with skull spams
.

Well when it dies, you have a spawner right behind it. Now your TDS is doing 20 damage instead of 17.

And when it dies on Gorg/TDS/Fam/Aby, the Queen just summons Infernal King

And if you don’t trust spawners and the toughest (best?) unit in the game… And have probles building a team while having all the troops… How did you even got there?

Well… Gem spawns were not broken back then, you could actually get your extra turns, you could keep board control, there isn’t the AI going crazy where the sky drops 6 straight 3’s of skulls and taking out first troops… It was all good before Unity. Like yes, the speed helps, But since the update I can’t “figure” it out. It’s like the AI is on some lucky ass BS.

These are good idea, yes i do like what you guys have, just afraid they are all slow… I just retreat matches if they take too long (2-3mins) I have trouble building teams, meh, my brain doesn’t function right, so i have a hard time thinking of a lot of things, especially at once, and harder for myself to understand stuff in my own perspective, so hearing from others, giving their inputs, and ideas, tips, helps me alot more.

Nowadays, I feel like the weekly buffs are becoming way too strong and just overpowering, giving really a chance to win “fast” hard.

If all you want is speed, give it the old Tacet speed PvP team… (has a guardian in it)

Elspeth the hero to death mark all enemies and create purples for sacrifice. Then sacrifice adding blue or red (whichever has more) a couple of times, drastically increasing magic on Crimson bat. Cast once crimson bat has enough magic to one shot. If you are already retreating so many battles, this won’t hurt. You have to retreat some if the board doesn’t go right, but if it goes well it take like 20 seconds.

I dont think this is viable anymore on pc… Due to gem spawns, also takes longer, while feeding all the mana to the AI.