Here’s a link to my Event Guide

Here is your guide to the new solo event Event Summary - [Screenshot_20221024_075948] Cheapest and Fastest Way To Get Your Desired Rewards - Some of the more popular options for the amount of Lost Souls needed. Some with Zuul etc may opt to use an orb_ascension on Carmina [image] Want Everything in 1 Day? [image] [image] Want absolutely everything in the shop? [image] If there is a reward you want to know more about getting, tag me and I’ll grab you the numbers on it

Important details for the new Holiday Events and how Battle attempts work:

Holiday Events sporadically to celebrate the various holidays that happen throughout the year. Overview You can find the Holiday Events by opening the Guild menu on the World Map.Every Holiday Even... 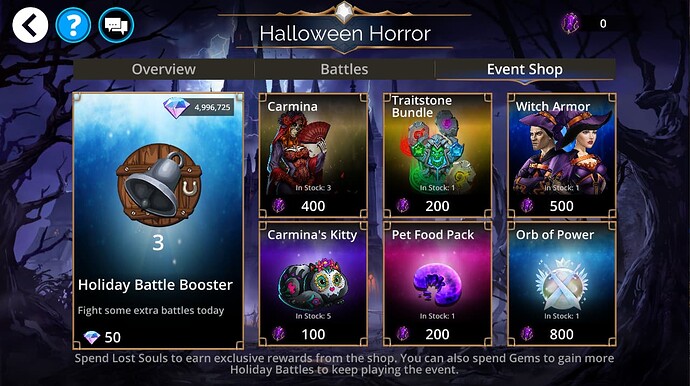 I like that gem count. how do I get some of that?

Absolutely no mention about whether/when the new troop is available in chests?

The New Legendary Troop will go into chests 4-5 weeks after the Holiday Event ends.

So not only it is on an external site instead of in-game, but it’s also buried in the update notes and not even highlighted in the event post?

I’m sorry we forgot to include the info in the blog. It was a simple mistake.

I will edit it in tomorrow, right now we have things that are higher priority and we don’t have enough people to delegate that to this second. We are very small team.

Still nothing happened here but we got new bugs added to the pool:

Probably could’ve fixed the blog post in the time it took you to write the explanation - just saying.

Justifications and changing things that benefit the playerbase tend to come first indeed.

Not to forget the size of the ‘team’, often small when they get overwhelmed by the inevitable consequences of their (lack of) QA et al, yet selectively large when some messages need to reach from mods to devs.

You have a simple mechanism for announcing such things in the game. Please use it.

Every other mobile game I play includes all news within the game. It’s hard to understand why you can’t. And why you can’t automate new troop additions to chests, along with the in-game news to announce them, as @AMT suggested.

Will the armour be available another way at a later date? Or exclusive to this event?

Don’t gamble on the possibilty to get the armour cheaper or at all after the event ends. It may never be available anymore, just like some warbands that are out of rotation.

But I feel it is more likely for the armour to periodically return each year during this time of year as a ca$h offer.

Does the Gem cost to buy extra battles reset daily as well. If not it could get very costly indeed.

Yes, goes back to 50gems everyday

As previously mentioned players can spend gems to purchase a Holiday Battles Bundle with 3 additional Holiday Battles. This bundle can be purchased multiple times, each time costing 50 Gems more than the previous time. The bundle’s cost will reset at daily reset.

Already in the announcement

Yeah my bad I missed that when I read the message on the event , to quick for my own good